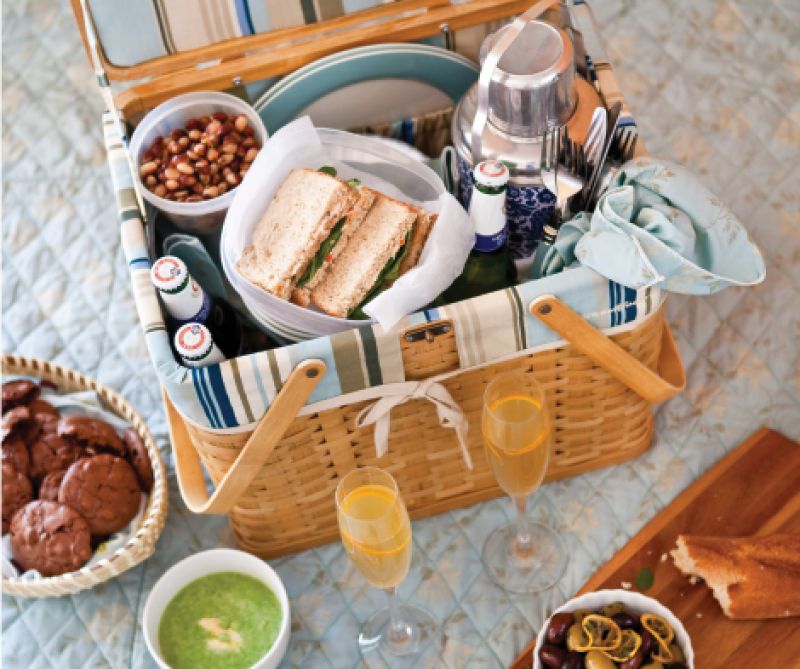 Spoleto Festival USA celebrates arts all around, even seeking creativity in the culinary world with a picnic basket contest during its Middleton Place finale. With spring full-blown, the possibilities for packing a fresh festival feast are at their most alluring. To warm up for the annual sunset soirée, we decided to open the lid on an elevated alfresco menu. And since Caroline Bevon’s charming food-to-go shop in South Windermere, Caroline’s Market, is known as the go-to place for creative provisions, she was just the expert to turn to for a picnic primer beyond PB&J. “I’ve only been to the Spoleto finale once,” she admits, “but it was glorious listening to the symphony and taking in the beautiful butterfly lakes and the warm night.” Since her first professional stint at the stove in The Long Room Club in 1983, studying at The New York Restaurant School, and subsequently setting up her company, Caroline has become known for her culinary flair.

“A picnic is about much more than finding a spot, spreading out a blanket, and setting out sandwiches,” says the Beaufort-born chef/caterer. “Part of the fun involves the surprises in the hamper. People take pleasure in realizing you’ve planned a perfect meal just for them.” A picnic provides an easy formula for successful entertaining, and it’s a lovely way to dine on the beach-house porch, bring the family together in the garden before graduation, or provide a little lunch between a chamber music concert and a marionette matinee.

“These marinated olives are addictive,” says Caroline of her mixed olive snack. “The tart sweetness of the pomegranate molasses complements the natural bitterness of the Kalamata and cracked green olives. Add the lemon, and you have a taste sensation that always astonishes people.” A Middle Eastern ingredient produced by reducing the juice of a particularly tart variety, pomegranate molasses can also add pizzaz to salads, sauces, and even stews.

For the picnic, Caroline serves this seductive snack with crusty bread and Champagne Cobbler, an old-fashioned drink popular with both ladies and gents in the 19th century. “I’m a big fan of Champagne, so anytime I see a recipe using bubbly, I have to try it,” she says of this concoction, which she found in The Essential Cocktail by Dale DeGroff. While the book calls for muddling the fresh citrus and pineapple for the base on a drink-by-drink basis, Caroline simplifies the process to make it portable, muddling the fruit all at once, straining it, adding the Maraschino liqueur, and putting the mixture in a plastic container. Then she just pours a little into each flute on site.

If you have trouble finding Luxardo Maraschino liqueur, which is clear and won’t discolor the fruit, Caroline suggests substituting a simple syrup. And for an extra squirt of flavor from the zest, she leaves the rind on the citrus when she muddles it. As for choosing the Champagne, “I personally prefer using a brut (very dry) for the
cocktail,” she says. Also included in the libation selection: a light Italian beer, such as Peroni or Moretti, in case a guest prefers sipping suds over bubbles or as a change of beverage to accompany the sandwiches.

With its base of chicken broth only slightly enriched by cream, this chilled, garden-fresh pea soup with Greek yogurt garnish makes a refreshing addition to a picnic. Unlike soup from split peas, English pea soup is light and bright, so it’s a good pairing for spring menus. “English peas, in season now, provide a sweet, substantial base, but frozen baby sweet peas can be substituted when fresh English peas are no longer available,” instructs Caroline, who purchases hers through Rosebank Farms, which also sells them to the public at their farm stand on John’s Island and through its CSA. Also look for the peas at the downtown Charleston Farmers Market, where Thackery Farms, a Wadmalaw grower, usually has them at their stand.

Caroline sets the color of the soup by putting the pan of simmered peas in a large bowl of ice to cool it down and stop the cooking process, since overcooking can cause the peas to lose their vibrant green hue. This has the added effect of keeping boiling hot liquid out of the blender and minimizing accidents. Depending on the size of your blender, the soup may need to be blended in batches. “I like to stop just short of a fine purée,” says Caroline, “leaving a little texture.” The soup can be made and refrigerated up to two days ahead; after that, the color will begin to fade.

To kick up the flavor, Caroline spices her yogurt with Madras curry powder. “I like it because the color blooms better,” she explains. Named for a town on the east coast of southern India, Madras is the hotter of the two commonly found commercially produced curry powders, both being made of a blend of up to 20 herbs, seeds, and spices.

While the choice of meat loaf for the main event may seem a retro move, Caroline’s veal version, more like a country pâté, is highly flavored, thinly sliced, and layered between two pieces of munchy multigrain bread—making it a remarkably classy picnic entrée. Her careful construction with the added coolness of roasted red pepper and fresh spinach yields a savory, satisfying sandwich. “You could substitute ground turkey if you don’t want to use veal,” advises Caroline. “But don’t substitute fragile baby spinach for the good old-fashioned curly kind. It takes a little more work to wash and stem the leaves, but you’ll get the dual benefit of decidedly better taste and texture.” Caroline’s choice of cream cheese for the base of the freshly roasted red pepper spread rates A-plus for safety, as it keeps mayonnaise out of the equation and the sandwich out of the salmonella zone.

As for the calypso bean and asparagus salad, “this is one of my favorite sides,” says Caroline. “It’s hearty, colorful, and again, lacking mayonnaise, so it’s safe for a picnic. The beans have great color; the ability to pick up the flavor of the vinaigrette, with its nutty base notes of sherry wine vinegar; and the texture of cannellini beans, which contrasts with the asparagus.” The beans also bear the nuance of the chicken stock that plumped them to softness. The shallot brings a slight bite, still more subtle than a yellow or white onion. And the little bits of basil tease. The sum of the parts is a sophisticated riff on a bean salad that—at its best at room temperature—is perfect picnic fare.

Since the Carolina Chocolate Drops are returning to Spoleto this year for the finale, Caroline decided she must create a cookie called “Chocolate Drops.” Rich and evidencing every bit of their triple chocolate content, the cookies are best the day they’re baked but can be kept in an airtight container for up to five days. However, she advises against freezing them. “They would taste fine, but their crackly tops are a tad fragile.”

Whether for a day at the park or for the Spoleto Finale, there’s an art and a science to packing a portable meal. Here are tips to keep you from ending up a basket case: 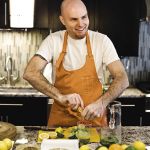