My Foodie Heaven
June 2008
WRITER:
Marion Sullivan
A journey to California wine country proves there’s more to Napa than what’s in the glass 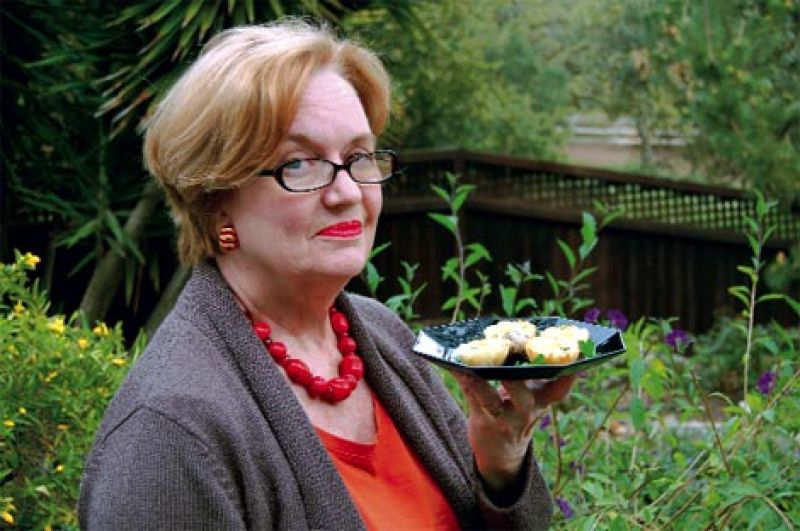 California is my Candyland; Napa Valley its sweet spot. Previous visits had been for fall harvests at the vineyards that stretch along its corridor, but when the fine fortune of a five-dollar Taste of Charleston raffle ticket sent me Napa-bound in spring, I discovered a whole new box of bonbons.

Day 1: A Luxurious Beginning
It was late March. The valley’s fruit trees were fat with blossoms. Poppies brightened roadsides, daffodils ringed fields. I had selected Meadowood Napa as home base.

A Relais & Châteaux property just east of St. Helena, the 250-wooded-acre private estate is the epitome of opulent seclusion.

At Meadowood, spring had rolled out the green carpet. Mammoth dogwoods vied with towering camellias for magnificence.

A total of 2,000-plus square feet of luxurious privacy, my suite was in the Estate Lodges, tucked into the eastern slope of Meadowood’s natural bowl-shaped valley. I carried takeout from the Oakville Grocery onto my deck for a little downtime before the evening’s feast. Perched up high, overlooking fairways and forest, I came to consider myself queen of the hill.

At dusk, I headed down the Silverado Trail to Yountville. Called the “culinary capital of California,” it’s home to three restaurants of legendary chef Thomas Keller, including his three-Michelin-Star French Laundry, my destination for the evening. From the first celestial dish of Oysters and Pearls—Island Creek oysters and pearl tapioca delicately sauced in an ethereal sabayon and finished with a quenelle of caviar—to the tender Chateau­briand of nature-fed veal with tiny turnips, fava beans, and bluefoot mushrooms to the mignardises arranged on a silver tower, the chef’s tasting menu was a memory-book journey for the culinary connoisseur.

Day 2: Cooking with the Pros
Meadowood stocks its suites with Cuisinart coffeemakers and toasters, silverware, and linens. Coffee and local goat cheese heaped on toasted sourdough (more Oakville Grocery goodies) were all I needed before heading to St. Helena’s prestigious Culinary Institute of America (CIA) at Greystone to attend a demonstration class and enjoy lunch.

Housed in the former Christian Brothers Winery, CIA at Greystone serves the culinary explorer a big bite. In addition to awarding degrees to full-time students, the school offers enticing cooking classes—from artisan breads to grilling techniques—plus wine programs to the public. Between a cooking demo in the DeBaun Theatre, lunch at the Wine Spectator Greystone Restaurant, and perusal of the Spice Island Marketplace with its kitchen store and more than 1,700 cookbooks, I spent a delicious day on campus.

Supper that evening was a simple affair on the terrace at The Grill at Meadowood, surrounded by white dogwoods that accentuated the croquet lawn below. Afterwards, snuggled in bed, I watched the near-full moon hover over the firs and redwoods in a starry sky, the croaking chorus of frogs by the stream the only sound.

Day 3: Spoil Me
When you’ve flown cross-country and have a hectic schedule, it’s good to plan a day just for pampering. My lazy morning started with a late breakfast at The Grill, followed by a meandering walk up one of Meadowood’s hiking trails. While in-room spa treatments are available, I found I could easily slip from the spa to the sauna to the pool—such relaxation and exercise conditioning my body for the gastronomic pleasures ahead.

The Restaurant at Meadowood—handsome in dark woods, stone, leather, and Frette cream table linens—has a sophisticated menu devoted to regional ingredients and a wine list that is an oenophile’s encyclopedia of California vintages. (Meadowood hosts the annual Napa Valley Wine Auction and has an extensive wine education program directed by a master sommelier.) Caviar shines here, too, in chef Christopher Kostow’s opulent cold smoked toro and osetra caviar with spring onion, crème fraîche, and toasted brioche. Skill marries humor in haute suckling pig: a composition of crispy pork belly confit, baby Frenched chops, and a tiny cylinder of loin wrapped in paper-thin bacon accompanied by parisienned pickled apples and a spray of caraway cabbage. My indulgence continued with a decadent milk chocolate soufflé served in an espresso cup.

Day 4: Market to Table
Since today’s hottest food trend is “market to table,” I signed up for Farmers Market Day at Cooking with Julie, a school owned by the charming, classically trained Julie Logue-Riordan. She and I spent the morning at the new Oxbow Public Market, an $11-million venture on the Napa River. The Oxbow has a plethora of outdoor farm stands for local growers, along with permanent tenants such as Five Dot Ranch (sustainably raised beef); the Fatted Calf artisanal charcuterie and butcher shop; the Model Bakery from St. Helena; Michael Mondavi’s handsome wine enoteca; and the Hog Island Oyster Company coming in September.

The first of many incredible bites began at the Oxbow Cheese Shop run by Kate Arding (who was in on the start-up of the Cowgirl Creamery) and ended with a charcuterie platter with Fatted Calf owner Taylor Boetticher. At the Oxbow Wine Merchant & Wine Bar, partner Peter Granoff selected a bottle of Duckhorn’s 2005 Decoy to pair with our recipes.

Back at Julie’s lovely house, with its large open kitchen looking out on flourishing gardens, the cooking commenced. Bourbon bacon, quail eggs baked in phyllo, and several other tasty things were on the day’s menu. Filled with testing and tasting, sipping and stirring, time swiftly flew.

We planned for dinner at Redd in picturesque Yountville. Richard Reddington, whose cuisine put the restaurant at Auberge du Soleil on the map and wowed attendees at the 2008 Charleston Food + Wine Festival, opened Redd in 2005. Described by Michelin as “minimalist urban-chic,” it has a contemporary interior and smart courtyard shaded with olive trees. With a bar menu of top-shelf liquors and small plates with big flavor and an extensive dinner menu presented by Vogue-worthy servers in designer aprons, Redd was quickly revealed as a place for foodies and scenesters. Count on sexy comfort food—pristinely fresh hamachi sashimi, sumptuous lobster and Meyer lemon risotto, and playful peanut butter and milk chocolate gianduja parfait—without big-city prices.

Day 5: The New Napa
Sharing a parking lot with Oxbow Public Market is COPIA, The American Center for Wine, Food, and the Arts, which opened in 2001. Named for the Roman goddess of abundance, it was kicked off by a $20-million and 12-and-a-half-acre donation on the Napa River from Robert Mondavi. With a three-and-a-half-acre garden, indoor and outdoor theaters, an art gallery, an amphitheater demonstration kitchen, a restaurant, classrooms, and shops, COPIA provided an activity-packed day. The highlight was the Spring Celebration of Sauvignon Blanc, including a first-tier cooking lesson, full luncheon, and three-variety wine tasting.

Motivated by The New York Times restaurant critic Frank Bruni naming Napa’s Ubuntu one of the top 10 new restaurants in the country, I’d made an early reservation for dinner. (Subsequently, Food & Wine crowned chef Jeremy Fox one of its top 10 new chefs for the year—a first, it said, for a vegetarian restaurant.) A Charleston Johnson & Wales grad and alum of Mike Lata’s Anson kitchen, Fox didn’t disappoint.

After an almost floral dish of assorted radishes from Ubuntu’s biodynamic garden, I moved on to the much-talked-about Cauliflower in a Cast-Iron Pot with Vadouvan (a French interpretation of Indian curry), its three riffs on cauliflower ringing harmony in the mouth. I couldn’t resist Anson Mills grits, served up rich and creamy with spring asparagus and tangelo-scented carrot purée and dressed with wisps of Parmesan and fresh fava leaves. Dessert, the domain of pastry chef Deanie Fox, was my second hot chocolate soufflé of the week, this one a deep dark rendition with toasted-marshmallow and graham cracker ice cream.

Day 6: Taste of Sonoma
I ended my stay at Meadowood cocooned in my downy white bed, reading and breakfasting on an unusually lush egg white omelette, hearty with caramelized onions, roasted tomatoes, and sautéed shiitakes. The birds were chirping, the bees were buzzing, and away in the woods there was the gobble of a wild turkey.

It was hard to leave my hillside sanctuary, but I was headed 40 miles south to the Ramekins Cooking School and Inn in Sonoma. Our class in Thai cuisine was taught in a bright participation kitchen with workstations where 16 students executed a dozen dishes. A beautifully presented buffet lunch created from our recipes was served with wine on a wisteria-bedecked patio, concluding the afternoon.

I popped into the Sonoma Market, a cross between Dean & DeLuca and Whole Foods, for a few provisions before heading out to my overnight digs. A mere 15 minutes from Sonoma proper, Landmark Vineyards in Kenwood offers special getaways along with their fine wines. My French country suite had an entrance from the gorgeous courtyard and a private patio with a vista of the vineyards and Sugarloaf Ridge. I strolled the landscaped grounds, visited the duck pond, and toasted the sunset with Landmark’s signature Overlook Chardonnay.

Day 7: Home Again, Home Again
When catching the red-eye, there’s no rush to the airport. I swung back over to Yountville for brunch at Bouchon, Keller’s casual bistro. Separated by an inviting courtyard, his bountiful Bouchon Bakery was also a must. Locals line up to buy the addictive brioche served at The French Laundry and the exquisite pastries. My plan: stock up on sandwiches and sweets to make a late supper for my flight—oh yes, and some hand-crafted chocolates to bring home the taste of Candyland.