PHOTO: Palate Teasers - Each course at McCrady’s—which sits on East Bay, though diners enter through Unity Alley (above)—brings surprises. An ingot of uni and cucumber (above left) appears to have a mousse-like texture, but is ice-cold; “Foichamacallit” (above right) plays on a Hershey’s candy bar but with foie gras.

Few are the evangelists who call cooking their mission; fewer yet are the chefs with the sobriquet “farmer.” Sean Brock owns both these monikers: a birthright bestowed by his grandmother, Audrey Morgan, as young Brock toiled by her side both in the garden and kitchen growing up in rural Virginia. She was the chef’s first teacher—a woman who knew the seasons, the land, and the ingredients. In her kitchen, he studied and nourished his love for food.

Today, Brock is called to establish the interdependencies of husbandry, agronomy, heirloom cultivar preservation, and the “repatriation” of ingredients birthed in the South—and he is tenacious. At McCrady’s (not to be confused with neighboring McCrady’s Tavern), he has aligned his vision to the pull of memory, constructing a Japanese-style multi-course meal couched in the seasons and context of the American South.

Influenced by the culinary styles of Asia, Brock’s 14-course tasting menu at McCrady’s is set much like an omakase experience, in which diners let the chef determine the meal. Each dish is a surprise, revealed only when served by the staff. Anticipation is part of the game plan. First, you must take your place along the intimate U-shaped counter, chiseled from black walnut, in the center of which servers deliver both plates and conversation.

The first course, an ingot of cucumber and uni compressed into a layered amuse, was presented on a sheet of gold foil. Though it was mousse-like in appearance, it was ice-cold, the nutty-sweet flavor of uni brightened with cucumber’s refreshing clarity. Diners’ sensory engagement continued to be tooled with visual clues—not always to be trusted—as colors and temperatures teased the palate with a studied refinement to the composition of a dish.

Whimsy prevailed from the start, as beet “leather” was served coiled on a flower frog. Its sturdy texture and earthy flavor belied the surprise of the accompanying fruit “caviar,” juicy vesicles of finger limes that pop in the mouth as playful as Pop Rock’s fizz in a schoolyard.

Thus, the choreography began. Brock’s chef de cuisine, John Sleasman, and a band of culinary pranksters set the table with passion and pleasure, wielding offset tweezers with surgical precision. As the courses continued, the servers explained the ingredients, their provenance, and their history.

Intricately prepared small plates arrived, each giving voice to the song of the components. In one, pickled spruce tips sprouted from the cap of a beech mushroom that topped an Ossabaw pork terrine, like edible ikebana (the Japanese art of flower arrangement). The dish provided an arresting heat against the foil of seasoned pork forcemeat and the gentle snap of pastry. Another bite contained sheer shingles of snapper topped with threads of local ají dulce peppers and curls of ginger—an array of warm colors that mimicked a Lowcountry sunset, serving as a visual nod to the kitchen’s commitment to the fruits of the South.

McCrady’s menu reveals the architecture of flavors. Not to be missed was the bitter sauce of black walnut milk puddled to the side of a creamy New Bedford scallop, whose surface was paved with juicy and sweet Asian pear slices. Later, the Midas embrace of brown butter basting cobia evoked a culinary “aha” moment for me. The dish was exquisite, composed of meaty fish flesh warmed with the toasted milk solids of browned butter, partnered with a golden squash puree that was topped with tiny pearls of squash and truffle.

The rice dish was pitch-perfect to segue into the Bear Creek Farm dry-aged beef course. The well-marbled Tennessee steak was cooked on a Japanese Konro grill, which produces neither sizzle nor smoke, just gentle embers searing and cooking the meat. Served with a savoy cabbage leaf stuffed with farro and white cabbage kimchi on a plate dusted with dried tarragon, the richness of the meat was mitigated by the soured cabbage and nutty farro. On the side, beef tartar wrapped in a shiso leaf rested on a marrowbone perch, humor winking in the display.

Keefe’s talents ensured that dessert was not without its own theater. First, the counter was set with an empty shell made of chocolate and benne seed, which was then filled with a warm caramel, anointed with benne seed oil, and served with yaupon holly mousse. While this magic occurred, diners enjoyed “Foiechamacallit,” a chocolate-covered foie gras riff on Hershey’s Whatchamacallit candy bar.

Breaths were freshened at the meal’s end by a white meringue filled with the menthol gelee of scuppernong juice. Satisfied grins wrapped around the counter. The flavors had been transcendent. Brock, Sleasman, and company served a culinary conversation where the meal spoke for itself. McCrady’s reassures that the pleasure of the table is discoverable not only in the mouth but in the mind and memory. 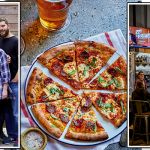 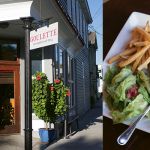 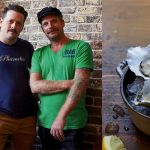