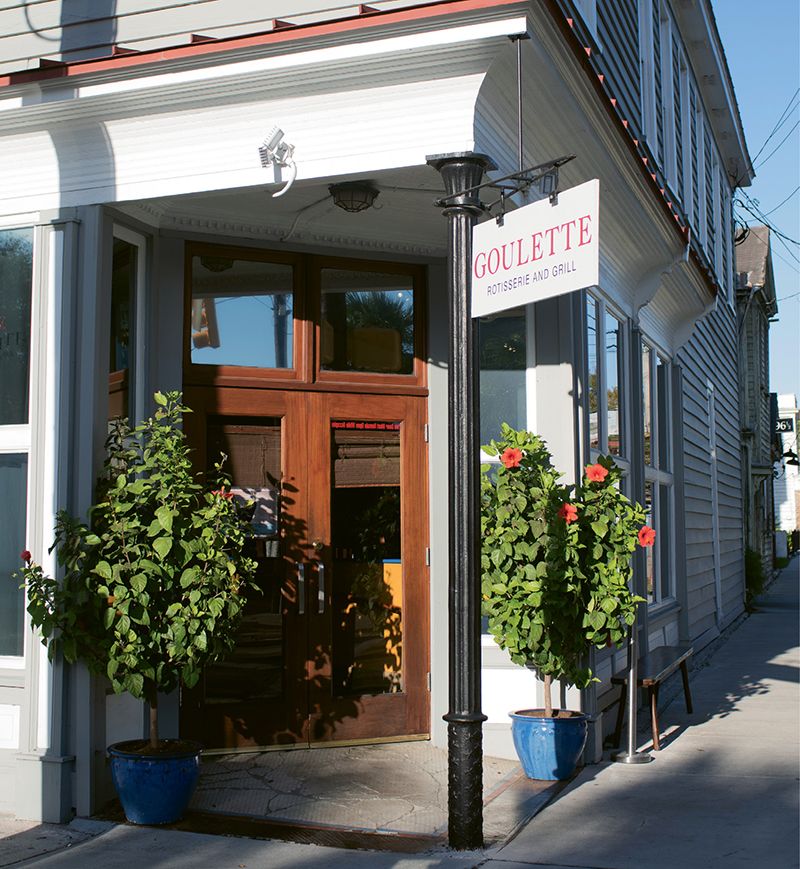 PHOTO: In the Neighborhood - After years of serving patrons on King Street, Goulet wished to cater to locals in a more casual environment; the former Lana space on Rutledge Avenue provided the perfect location.

Walk into Goulette Rotisserie & Grill on any given night and you will likely feel that you are an interloper at a family reunion: there’s the bonhomie, joie de vivre, faire la bise (cheek kisses)—it is clear that Charlestonians missed restaurateur Perig Goulet and he, in turn, missed them.

The French saying “qui seme le vent recolte la tempete” (what goes around, comes around) aptly describes Goulet’s triumphant return to the local culinary scene after a four-year hiatus. Back in 2013, he sold the King Street home of his beloved La Fourchette to Hall Management Group; then earlier this year, he moved into the former Lana Restaurant space. During the interlude, the chef-owner cemented his vision for Goulette: a laid-back neighborhood eatery with none of the white-tablecloth fussiness or strict French cuisine of his former establishment.

In late May, at the corner of Rutledge Avenue and Cannon Street, the cheerful bistro was born. Inside Goulette, the walls are washed in a vibrant ocre jaune—a favorite golden hue of South of France painter Paul Cézanne—and bouquets of sunflowers stand at attention on the well-burnished bar, turning their faces to welcome visitors who come to drink and dine.

The playful interior, quite different from the candlelit space at La Fourchette, casts chicken artwork in star billing. Goulet intended to call his new café “Poulette,” rhyming it with his former restaurant, but discovered the name was trademarked. So “Goulette” it was—an extension of his own name, rooted in the term “gullet.” As paintings of poultry liven the walls, Oriental rugs, primitive barnyard sculptures, faded watercolors, and the stuffed head of a deer contribute to the Bohemian bistro motif.

Still, the biggest trophy in the room is the rotisserie spit, where whole chickens self-baste slowly into a tawny shade of brown speckled with toasted herbs. Lounging on the kitchen’s pass, they are an edible Siren’s lure. Beyond the rotisserie, diners can glimpse chef Kyle Yarbrough, formerly of La Fourchette, whose cooking is informed by French technique and assured by his culinary experience with fire. Before coming here, he tamed the flames on Cumberland Street, cooking first at Eagan & Sons and then Cumberland Smokehouse, honing his grilling and roasting skills.

Together, he and Goulet devised a menu that showcases these talents, fitting for the petite scale of the restaurant; and in typical bistro fashion, it is laminated in plastic and doubles as a place mat. While the cuisine is French-inclined, it is approachably served, with no translations required. The menu nods slightly to La Fourchette: gone is the cassoulet, but present is the confit of duck leg; there’s no poulet Basquaise, a slow-braised chicken dish, but the sauce prevails.

Other items, meanwhile, pay no mind to gastronomical patriotism. Comfortable serving up classics of confit and salade Nicoise, the chef and owner also dally in shrimp rolls glistening with lobster oil and smoky barbecue sandwiches. The side selection includes both soupy Provencal ratatouille and coleslaw, while a Bibb lettuce salad and pommes frites are paired with most entrees. A la carte sauces provide worthy partners to the crisp, starchy fries. They also dovetail with the grilled and roasted selections for clever menu expansion: wave the sauce wand for chicken coq au vin, lamb Basquaise, steak aux champignons or poivre.

Warming soups include tomato bisque—which can also be served cold—seasoned with fresh-plucked rosemary, whose woody pine notes muscle their way through the gentle acidity of late-harvest tomatoes. And thankfully, Goulet has not abandoned his maman’s vegetable soup recipe, now tinted pale orange by carrots and thickened with potatoes.

Daily specials, crafted with seasonal ingredients, should not be missed. On one visit, risotto flush with golden saffron provided a throne for seared scallops nestled with haricot verts, artichokes, corn nibs, and tomato concasse, all dressed with cucumber vinaigrette. Another delight was a chanterelle salad tossed with spiced pecans and goat cheese lardons—a forest of flavors and textures.

Seafood is a frequent feature, and it is here where the precision of timing tips the scale askew. A beautiful loin of salmon cloaked in a horseradish sauce reminiscent of a French classic rémoulade quivered precariously close to raw in its center. Still, the dish was one of the very few missteps from this tightly ordered kitchen, which excels in roasting and baking. A quartet of profiteroles, timeless French pastries filled with ice cream and bathed in a warm chocolate sauce, were à point, as the French would say. Wines are global in their reach; an Italian Pecorino was a pleasant discovery, as was the reasonable pricing for a diverse carte of wines.

Safe to say, Goulet and Yarbrough have made a return sur la table. They’ve retrenched the menu of La Fourchette from its French canon, embracing mayonnaise and ketchup, cheesecake and pate a choux, and an unlikely partnership with barbecue. They offer you a charming disruption of a cuisine with hospitality and camaraderie, welcoming you to the table tout suite. 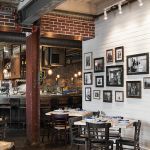 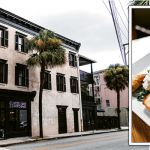 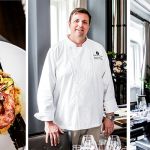