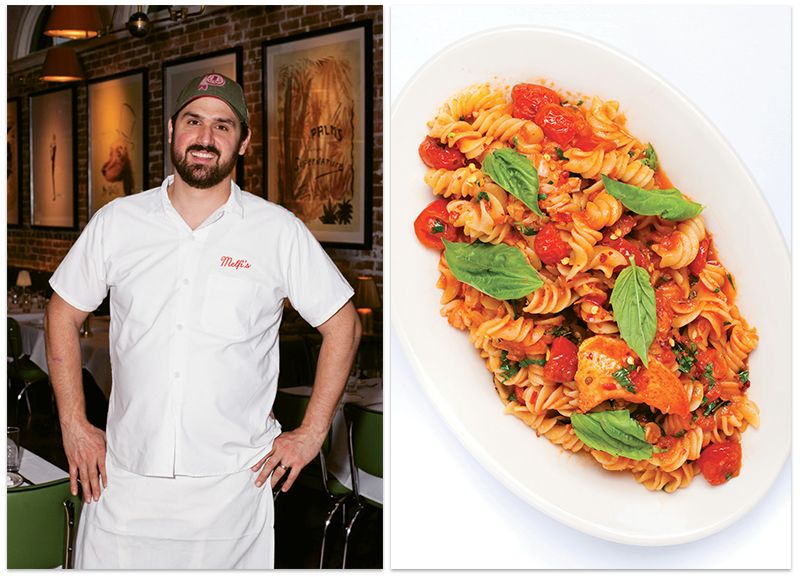 Melfi’s is at the apex of the King Street restaurant universe of partners Brooks Reitz and Tim Mink. Adjacent to their other eateries, Leon’s Oyster Shop and Little Jack’s Tavern, this Italian-inspired spot they co-own with chef John Amato, Kelly Dougherty, and Brys Stephens, is tethered to a nostalgic past: the pizza of Reitz’s youth and the pastas of ancient Rome.

Reitz and Mink are masters of this tableaux: a seamless mix of “new that is old.” From the bespoke channeled banquettes—low slung for comfort and tooled with a gentle curve for resting your arm—to the supple bar stools, well-being and contentment are strewn throughout Melfi’s like the herbs on the pizzas or the pecorino on the pastas. Linger at the bar while you toy with an Aperol Spritz or a signature Bitter Grapefruit Shakerato—both designed to rouse your appetite.

(Left) Once a drugstore, Melfi’s has been transformed with a long bar and leather bar seats; (Right) Zeppole make for a sweet ending.

Take the edge off your hunger with bruschetta—sturdy slices of semolina bread cushioned with trim mounds of pancetta, artichoke, and walnuts­—or choose a creamy ricotta topping punctuated with chilies and tempered by a drizzle of honey.

Dally among what the menu calls “Little Things,” items like artichokes slicked with olive oil and braced with herbs; roasted red peppers perfused with wood smoke and awash with capers, herbs, and garlic chips; or strands of zucchini fritti crisp and dry-fried, Italy’s tempura.

On the “Salads, Small Plates, & Such” section of the menu, Melfi’s Sort-Of Spicy Caesar Salad satisfies those eaters bored with the meek and mild Caesars of the Lowcountry. Leaves are laden with toasted breadcrumbs, the Southern Italian heat of Calabrian chilies, and an unctuous mantle of anchovy-laced dressing. Bene, molto bene.

If your preference is for greens tempered by texture, try A Beautiful Lettuce Salad featuring five leafy greens simply dressed. Amato’s kitchen also produces a substantial chopped salad layered with salt, crunch, and fat that will trigger all your senses.

Salad is a prelude to Melfi’s portfolio of pastas. The Roman canon is expressed in carbonaro and cacio e pepe—both toothsome, braced with pecorino and pepper that invigorate your taste buds with their richness. One week’s linguini with lobster, cherry tomatoes, parsley, and lemon is reimagined a few weeks later in fusilli fra diavolo. Monastic simplicity defines the pastas where the undertow of the briny sea anchors the flavors of fresh seafood.

The restaurant serves fresh salads including its “Beautiful Lettuce Salad” with peas and proscuitto (left) along with cocktails such as the Bitter Grapefruit Shakerato (center). Pizza anchors Melfi’s menu with pies like the Stretch Armstrong (far right), made with stracciatella cheese, basil, and extra-virgin olive oil.

The quartet of secondi has remained fairly constant since Melfi’s opened. Simply grilled fish (no head or tail) is joined by chicken served hunter style: Melfi’s cacciatore is succulent, generous, and plated with saffron-gilded Arborio rice—the antidote to winter’s chill.

That said, Amato’s kitchen will “play with its food” and its recipes. The shrimp and sausage combines local shellfish, house-made peppered and fennel seed-laced sausage, braised Roman beans (the flat Italian variety), peppers, and onions on a bed of silken polenta. This is shrimp and grits after a year abroad.

Melfi’s also delivers on the pizza. Not New York-style nor even Neapolitan, but pizza in the style of Roma. In Rome, pizza is identified as pizza al tonda (round pizza) to distinguish it from pizza al taglio, which is pizza cut from a long sheet of dough. At Melfi’s they use a sheeter to stretch the dough to its parchment-like thinness. These crisp personal pans reflect their Roman heritage in texture. In toppings, it’s another story. The Stretch Armstrong is the simplest pie with stracciatella cheese, tomato sauce, and basil. But clam, prosciutto, white cheese, and a seasonal variety all tempt. Note: In the pizza Parthenon, Melfi’s $21 price point is costly.

However, you can find your “sweet spot” in the dolce menu, where homemade gelatos, sorbettos, and a few pastries delight in their simplicity. Zeppole (think doughnut with no hole) enticed with its side of sweet and sour cherry compote and freshly made gelatos crafted from seasonal fruits are equally sure to please. Or, when in a Roman-inspired restaurant, do as the Romans do and have an Amaro selected from a well-curated digestivo list.

With its exposed brick walls; posters created by Andrea Ferolla, the “Italian polymath” behind Chez Dédé in Rome; Italian mid-century lamps; cheeky caricatures of the staff; and the amber glow of strategic lighting, Melfi’s gives no clues to the long-ago life of the drugstore from which it takes its name. Leonard G. Melfi operated a pharmacy here until 1916, and I’d like to think he would be pleased with its current adaptive reuse where it dispenses the ultimate cure: hospitality with creative innovation, style, and care.