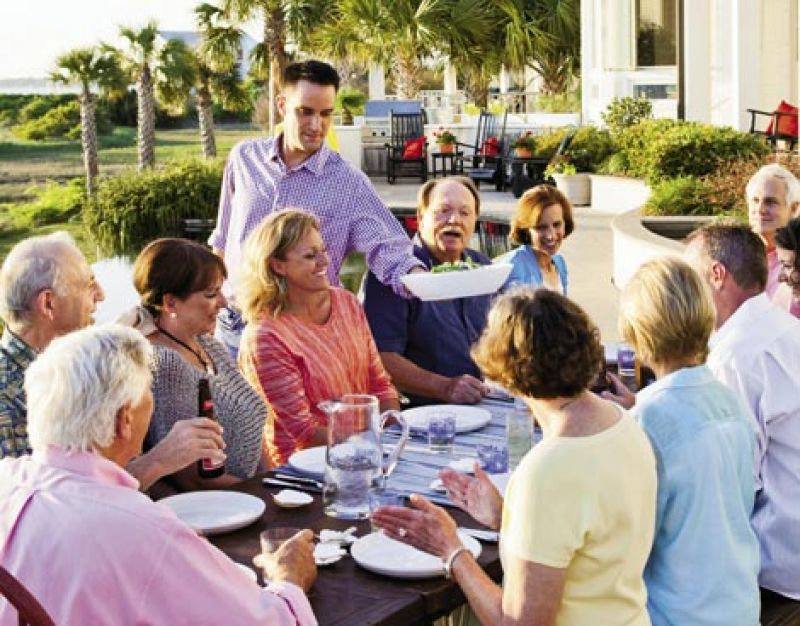 The sangria is cold. The grill is hot. Ditto the weather, but that isn’t bothering the group gathered oceanfront at this Sullivan’s Island home. There’s a blessed Atlantic breeze cooling the terrace where Doug and Pam Van Scoy have invited their Jim ‘N Nick’s associates to join a few friends for a little alfresco dining—and a big surprise.

A local partner with Jim ‘N Nick’s Bar-B-Q, Doug cooked up this special event. He’d heard all about the December asado trip to Uruguay that company owner Nick Pihakis orchestrated for the Fatback Collective, a self-described crew of like-minded “chefs, pitmasters, culturalists, and eaters committed to porkfection.” Jim ‘N Nick’s executive chef Drew Robinson came up from Birmingham to show the Van Scoys what he and his Fatback compadres had learned about the South American style of barbecue. With some backup from John Haire, Jim ‘N Nick’s local store owner for Charleston and Bluffton, this culinary team is throwing an asado, Southern-style.

“The South American asado, much like the American Southern barbecue, can either refer to the event or the techniques of cooking over fire,” explains Drew. “As events, both have traditions of casual camaraderie, where folks linger around roasting meat, sipping some spirits, sharing good food, and making good memories.”

It’s the technique and timing that make the difference. “While both cultures use outdoor fire pits with the wood burned down to coals, the asado uses a hotter fire and a faster cooking time, putting the meat either on a grill or directly over the coals,” he says. Additionally, as with the potatoes, onions, and carrots in this menu, the asado technique for cooking vegetables often calls for burying them in the coals, exposing them, as with the meats, to a much more intense heat.

The accompaniments differ as well. “The South Americans’ use of fresh herbs, oils, and acidity is a great complement to fire-roasted meats and a nice alternative to a typical Southern barbecue sauce,” says Drew. “Their herb sauces, such as chimichurri, also pair particularly well with leaner, grass-fed meats.”

For this evening’s asado, Drew selected chicken and rib eye from Georgia’s White Oak Pasture’s pastured poultry and grass-fed beef, as well as pork rack and sausages from the heritage breed cross of Berkshire and Mangalitsa that Nick is developing for small-farm sustainability. “In Uruguay, it is pretty typical for an asado to be what we would think of as a mixed grill, with a wide variety of meat,” says Drew. “For this party, we want to make sure that the guests get the feel of an asado with diverse offerings but with a balance of leaner and richer cuts.”

Drew makes a piquant chimichurri and a grilled tomato and onion salsa as accompaniments, taking the place of barbecue’s traditionally thicker, sweeter meat sauces. Vegetables cooked rescoldo-style (i.e. in the cinders of the fire) include potatoes, carrots, sweet onions, eggplants, and red peppers, finished just before serving with a drizzle of the chimichurri and creamy tart crumbles of goat cheese. Then, to make sure that this asado has a real Southern twist, Drew adds a locally sourced first course: summer tomato salad. Starting with multicolor heirlooms at their peak, he layers on light greens, baby butter beans, and just enough thick-cut, diced smoked bacon to tease the taste buds for the meats to come.

With the main course sizzling over the coals, Drew and John trade time on the grill to work on the appetizers. Their picks? Barbecue pork tacos, queso spiked with pico de gallo for an extra kick, and grilled vegetable quesadillas. Add icy-cold beers, white wine, and the restaurant’s refreshing sangria, and there’s plenty to keep guests happy poolside.

Still, everyone’s quick to gather round when the Van Scoys call them to the table. As heaping platters of the smoky meats and vegetables—and even a grilled dessert—arrive, they savor the delicious cross-cultural surprise. Drew and John have not disappointed, delivering a Southern asado that won’t soon be forgotten.


Cooking With Fire
Tips from the chef

While the team brought in a Jim ‘N Nick’s heavy-duty grill for this feast, Drew says a couple of the largest Weber kettle grills would work just as well. Be sure to use a chimney starter to keep coals going to feed the fire.

About one hour before cooking the meats, build a hot wood fire (the chef prefers hickory) in the grill. Allow fire to catch completely and burn to a medium-hot level. When ready to grill, add a few more coals if the fire has died down. The temperature of the closed grill for all of the meat recipes should read about 350°F.

All of the items can be cooked in a two-hour window. Drew recommends the following order:
1. Vegetables for the relish and tomato salsa: cook first or even a day ahead.
2. Meats: grill rib eye. Midway through, add pork rack. (Both will need to rest a minimum of 30 minutes but can be held warm for up to an hour.) Cook chickens and sausages last.
3. Rescoldo-style vegetables: use the second grill. Start with the salt-crusted vegetables that need to be buried. Follow with eggplant, onion, and peppers.
4. Cobblers

For the Grilled Vegetable Relish