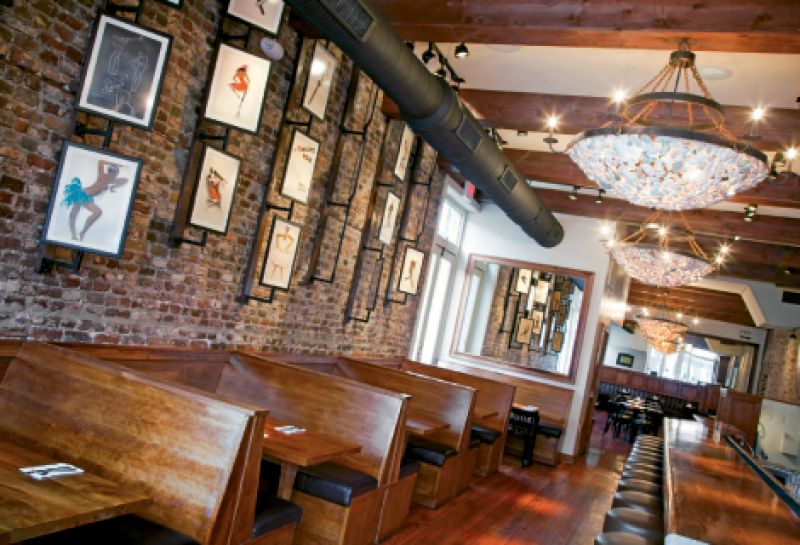 These days, if you hear an “amen” when passing the corner of East Bay and Cumberland, it’s likely a contented diner praising the blessings of the sea at Amen Street Fish & Raw Bar. The name is a nod to Cumberland Street’s former moniker, reportedly given in the 18th century because of the prayers heard coming from nearby churches. The restaurant’s chic look is thanks to recent renovations by owners Richard Stoney and Keith Jones, and the fresh menu is the work of chef Todd Garrigan, formerly of Med Bistro and Southend Brewery.

Step inside the recently opened eatery, and you’ll be struck by contemporary elements such as expansive windows, a street-view raw bar, and oyster shell light fixtures that hint at the proximity to the harbor. But even combined with new brick and gleaming wood, these don’t obliterate the historical flavor lent by authentic maps and documents depicting the area’s past, an original column from the building’s former cast-iron storefront, and art that celebrates jazz’s influence on Charleston’s history. The overall result is that of a handsome seafood house with an easy spirit and a slightly nostalgic air.

For the diverse menu, Garrigan has blended the best of several worlds, offering expected favorites alongside creative sides. For starters, oyster shooters and spicy Bloody Marys pair well with chilled seafood cocktails of champagne-poached calamari or peel-and-eat shrimp. A serving of chilled Gulf oysters on the half shell includes a dozen beauties of the day, while jumbo lump crab cake comes with a memorable Louis dressing, tart green-apple slaw, and cocktail sauce. Tasty littleneck clams can be had with mignonette and horseradish cocktail sauces.

Visiting on a recent Sunday night without a reservation, we were led to a table near the kitchen. Fortunately, the gracious host accommodated our request for more private seating away from the good-natured hustle and bustle of the bar. Fried green tomatoes arrived quickly and proved immediate evidence of the chef’s success. Engagingly displayed with shrimp salad and pickled okra, they may set a new standard for this traditional local favorite. The next starter—shrimp corn dogs nestled in a pool of hot Carolina mustard—was the ultimate bar snack, evoking the question, “Where have these been all our lives?” The fried oysters, light and scrumptious, were paired with a simple salad of romaine, tomatoes, and cornichons.

Bypassing burgers, po’ boys, and other hearty sandwiches, we moved directly to the main course choices, which include seafood platters, shrimp and grits, and fresh fish. We went for a platter, a piled-high feast of shrimp, oysters, and flounder that was served with hush puppies and creamed corn so fresh and tender it took us right out to the farm. Our second entrée, the delicious Lowcountry seafood pilau, combined shrimp, jumbo scallops, mussels, and clams and was accompanied by nutty popcorn rice (which smells like the snack when cooking) mixed with butter beans, diced carrots, and corn. Pleasantly served in the perfect portion size, it was ideal for the moderate appetite.

Sides are unusually delicious at Amen Street, and we were glad to see that the vegetable plate option invited selection among popcorn rice, stir-fry veggies, white corn grits, hush puppies, the divine creamed corn, and more. While dessert offerings included Key lime tart, chocolate mousse pie, strawberry shortcake, and a trio of all three, we chose to end on a traditional note with red velvet cake that would, I believe, have met with the approval of ancestral Charleston cooks.

From its thriving corner in the heart of downtown’s historic district, Amen Street provides a casual option for enjoying fresh seafood with a refinement missing in some other establishments. Under the watchful eye of manager James Romano, our confident server admirably knew all ingredients, preparations, and cultural influences for menu items as well as the origin and nuances of oysters and fish. We considered this yet more evidence that as the city awakens to the vibrant renewal of spring, Amen Street is blooming with promise.