From Nigeria and India with Love

From Nigeria and India with Love
May 2019
WRITER:
Lauren B. Johnson
PHOTOGRAPHER:
Peter Frank Edwards 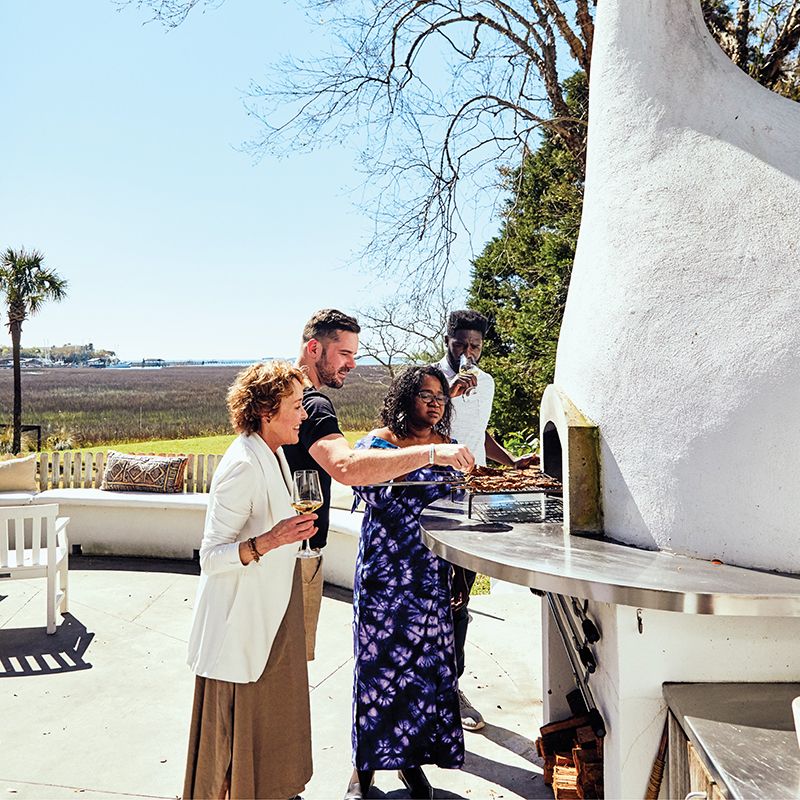 Callie White and Grace Oyediran await a special meal prepared by their sons.

Beyond Graft Wine Shop & Bar’s propped open door at 700 King, a mixed crowd of business casual and denim-clad 20-somethings gather around the Thursday Tasting table, finishing sips of chardonnay from a boutique Santa Barbara vintner. Nearby, a young couple settles into low-back seats at the elbow of a marble bar top with a syrah they’ve selected from the soaring wall of reds shelved along one side of the 1,200 square-foot industrial space. The playlist slides into 2Pac’s “Do For Love,” as co-owner Femi Oyediran chats with a polished trio of seniors who are curious about a pinot gris. With his hands lightly hooked into his pockets, smile brightening above his dark beard, he explains to the women that Alsace is a French wine region just over the mountains from Germany.

A little more than a year into business, the night’s steady flow of clientele is all but habit now. At Graft, millennials and boomers alike often mingle and sip, while ’90s hip-hop hums in the background. “On any given afternoon, my mom might be in here, sitting next to two of my friends,” says Miles White.

The scruffy but baby-faced co-owner, who handles most of the shop’s daytime dealings, is the more playful of the duo. When they met a decade ago, as the greenest members of the Charleston Grill front-of-house crew, the young men bonded over their bottom-of-the-food-chain jobs and a shared interest in music. Nineteen-year-old Miles had recently transferred home to the College of Charleston from Cornell’s School of Hotel Administration, unsure whether he might pursue a career in the hospitality industry.

Femi, then 21, saw the gig at the Grill as a temporary way to pay the bills while building a reputation on the local music scene as a DJ and band promoter. At the time, the young men regarded food running and table-bussing as merely means to an end, but it was in that sprawling and regal dining room, in the company of James Beard award-nominated sommelier Rick Rubel and his 35-page award-winning wine list, that the young men established a kindred passion for wine.

As the youngest child of famed biscuit maven and caterer Callie White, Miles sprouted an interest in the hospitality industry early in life. “He was a mischievous boy in his own quiet way,” reflects his mother. During family trips to California each year, Callie attended courses at the Culinary Institute of America in Napa Valley, and her son’s “love of cuisine, hotels, and all things food and beverage was evident from the start.”

After working a slew of restaurant positions throughout college, Miles decided to plunge headfirst into an 11-month-long Accelerated Wine and Beverage program at CIA Greystone, following in his mother’s path in Napa Valley. He graduated with honors. Rather than chase down a sommelier position in San Francisco, New York, or Chicago—like many of his peers—he chose instead to move to central Oregon to study the hands-on process of wine-making. For four seasons, Miles hunkered down in the Willamette Valley, harvesting grapes and learning the intricacies of viticulture.

Meanwhile, Femi had begun studying wine as a way to help move up the ranks at Charleston Grill. He had been raised in a family that abhorred drinking; “When I was first starting out, I didn’t even know how to use a waiter’s tool to open a bottle,” Femi recalls, with a laugh. “But my mother did teach me how to use my head and be pragmatic.” He soon devoured wine textbook after book. Then one Saturday morning at the Grill, Rubel offered to lead a tasting. “Rick opened up ridiculous wines just for four of us. It was so dope,” Femi says, of his fledgling days. The same gang met the following week as well, and then again, and again, for what eventually developed into a recurring tasting group that gathered each weekend for five years. “When you have something that consistent, you start developing a clear opinion on wine,” explains Femi.

So, how does a 25 year-old man at the threshold of a burgeoning sommelier career reveal the news to his teetotaling mother? He took a deep breath and picked up the phone. “My mom found out that I drank alcohol in the same conversation that I told her I wanted to become a wine professional,” Femi confesses. “Nigerians have this commitment to being the best, so I told her that I’d earned the highest score on the Certified Sommelier exam.” He’ll never forget her response: “I don’t know what that means,” Grace said, “but if you are happy, I am happy for you.”

Femi wasn’t entirely happy, though. “At the time, Charleston had exciting points of interest for food and beer, but it was really difficult to get friends our age hip to wine in places they’d want to spend time,” he recalls. So he and Miles set out to create their own kind of hangout that blended their shared enthusiasm for music and wine. In March 2018, Graft opened its doors, alongside a handful of other purveyors who’d recognized the same gap in the market (among them, Wine & Company, Monarch Wine Merchants, and Vintage Lounge).

After the grueling 100-hour workweeks that accompanied Graft’s opening, Miles and Femi often found themselves depleted in profound ways. And as they did when they were children, the young men turned to the kitchen and their mothers’ cooking.

“I would take home an open bottle of something cold from the shop,” recalls Miles, “and then blast chicken under the broiler for my mom’s tikka masala.” Though renowned for her Southern fare, Callie White had developed an affinity for cooking Indian cuisine throughout her son’s childhood. “I was totally in love after I had my first bite of really good Indian food in Vancouver in the early ’90s,” says Ms. White. While the British-style, garam masala-spiced dish is a family favorite, side dishes such as roasted cauliflower, smothered with fresh turmeric and brown mustard seeds, along with crispy fried okra and basmati rice pilaf, have faithfully appeared year after year on the White family dinner table. “I gave each of my children a copy of Julie Sahni’s Classic Indian Cooking,” says White. “Hopefully theirs are becoming as dog-eared as mine.”

There are no cookbooks that Femi’s mother, Grace, has passed along; what remains instead is a kind of spoken record. “Growing up, my family always ate the classic dishes from our Yoruba tribe,” Femi shares. Everyday staples of his childhood included a vegetable and smoked meat stew known as efo riro that packs plenty of heat with the addition of Scotch bonnet peppers, served with a starch called fufu. Another favorite: spicy, nutty meat skewers called suya, often sold by street vendors in Nigeria.

“When I eat those things today, the smells and flavors take me back to times I can’t go by on memory alone,” Femi says. To guide him, he often calls or Skypes his mother Grace, who patiently answers his rapid-fire questions. Though Grace lives in Cincinnati, their video chat cooking lessons have brought Femi closer to his mother. “Nigerian boys don’t customarily learn how to cook,” says Grace. “But Femi often asked, so when he was about 13, I started teaching him.” She is now thrilled by her son’s interest in family recipes and frequently mails Femi West African spices. “It gives me joy,” adds Femi, “to know our traditions won’t stop with me.”

On a recent spring afternoon, Miles and Femi met their mothers at Callie White’s Mount Pleasant home, where the sons prepared a feast. With preparations underway, Miles and Callie worked side-by-side with familiar fluidity—an easy rhythm developed over years of cooking mother-son dinners. An outdoor kitchen and wood-fired oven made for a setting ideal for entertaining. Miles’s buddies regularly request to cook at his mom’s house—which is fine by him. As he put it, “She’s easily one of my best friends.”

Distance has made a shared practice of cooking harder for Femi and Grace. Not since 2004 have they had an opportunity to make a meal together in the same kitchen. The time apart is unnoticeable, as Femi and his mother quickly return to a natural cadence, chopping vegetables, grilling meat skewers, and teasing one another along the way. Both Grace and Callie have cherished watching their children convert strong work ethics and innovative thinking into a business collaboration that reflects their passions and interests.

For their globally inspired meal of comforts, Femi and Miles recommend a light and juicy red, such as a gamay, or something with a touch of sugar, like a vouvray (chenin blanc). For a meal with their mums, they brought along wines from the shop: a dry Alsatian riesling—2017 Vignoble du Reveur Vibrations Sec ($25)—that plays bright counter to spicy cuisine, and a 2015 Ioppa Colline Novaresi nebbiolo ($19) bearing smoke, spice, and ripe berry ideal alongside the meatier dishes.

Playlist: “Cooking Jams From Across the Way” compiled by Femi Oyediran

Like so many young entrepreneurs of their generation, Miles and Femi have carved out their own pathways to success outside the humdrum roles life may have at one point presented them. And they have cause to celebrate; the friends continue to garner national recognition for their efforts—among these laurels, most recently, they appeared on Food & Wine magazine’s list for Sommeliers of the Year.

“I have watched Miles mature and work harder than ever in his life to keep up with the success of Graft,” praises Callie. “It’s been very gratifying!” The pride Grace holds for Femi’s accomplishments may be best summed up by the broad smile she wears while sipping from a glass of elegant and floral Alsatian riesling—a rare indulgence, chosen just for the occasion by none other than her son.

RELATED ARTICLES:
The Beauty Imperative
The Power of One
Lowcountry Local Feast
Resources: 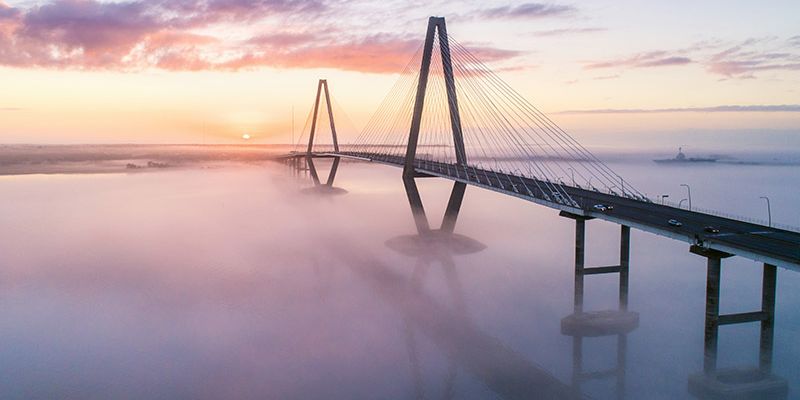 The View From Here

Hovering between 50 and 400 feet, drones allow photographers to capture our region from intriguing new heights.... 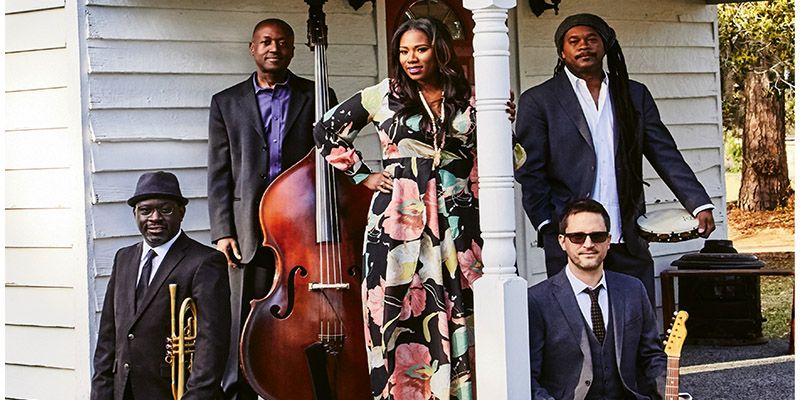 After wowing audiences the world over with their soulful, get-up-and-dance versions of Sea Island spirituals and... 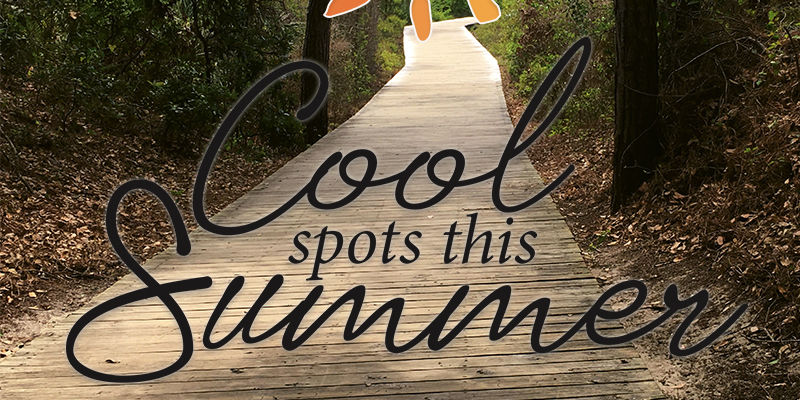 Where to play, swim, eat, and cool off from downtown to the beaches and the ’burbs this season 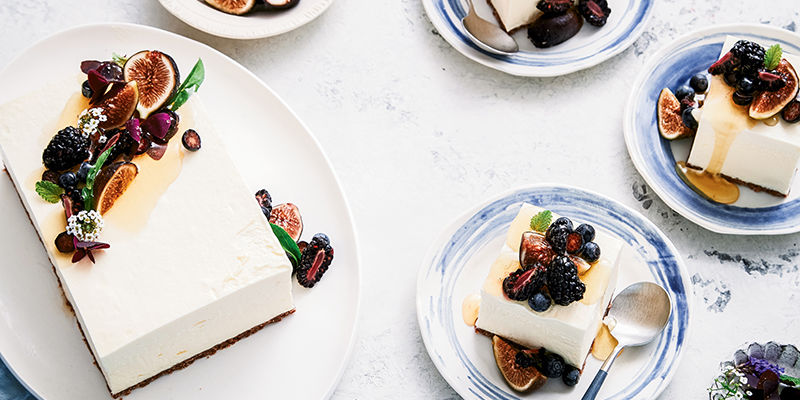 Seasonal fruits star in these luscious treats, sweet and refreshing complements to the sultry season 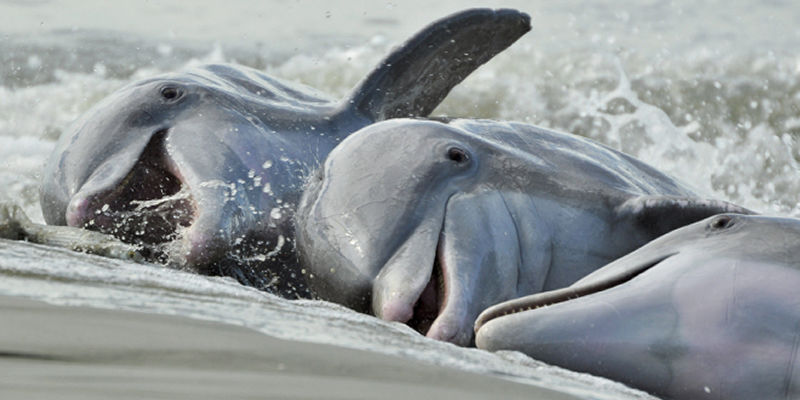 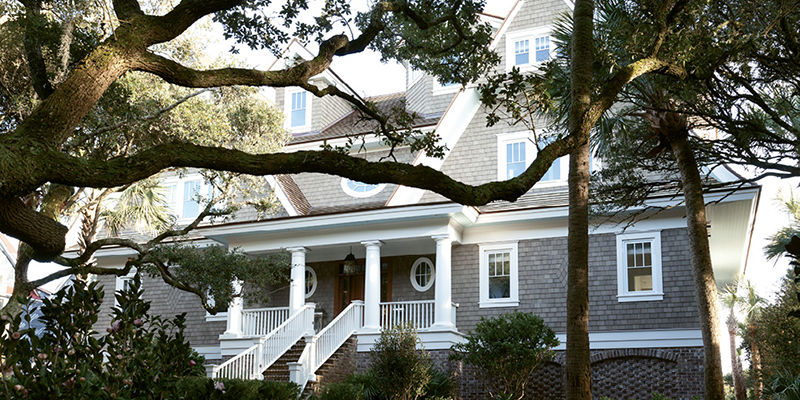 With help from architect Christopher Rose and interior designer Melanie Turner, a pair of Atlanta-based attorneys... 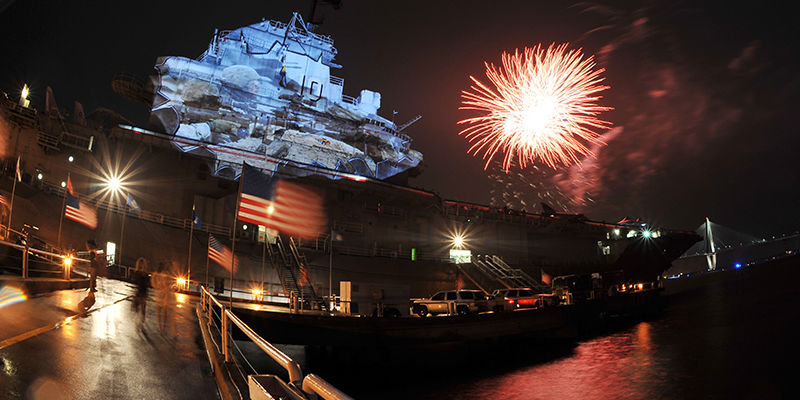