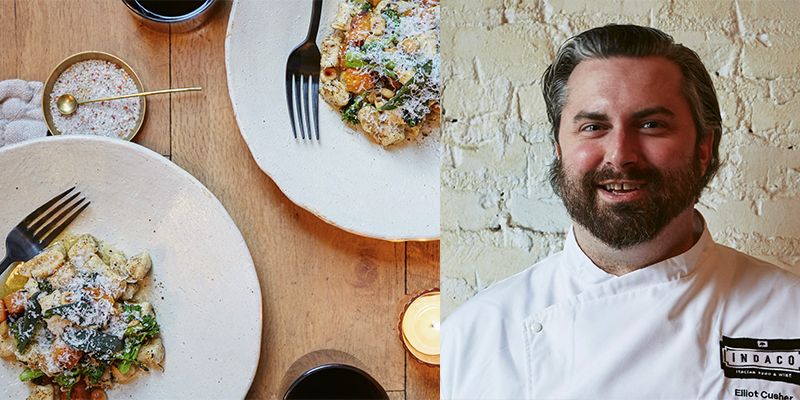 Mix the ricotta, egg, and salt in a bowl. Add in flour and mix by hand for five to seven minutes to incorporate all ingredients. (You can also use a KitchenAid mixer with the dough hook on the low setting for the same amount of time.) Remove dough from the bowl and wrap in plastic wrap. Flatten out and place in the refrigerator for at least two hours.

Lightly roll out the dough on a well-floured surface to 1/2-inch thickness. Using a bench scraper or chef’s knife, cut the dough into long strips, and then cut the strips into 3/4-inch-long rectangles. Dust them with flour, and then place them on a parchment-lined pan to refrigerate until ready to cook.

Preheat the oven to 350°. Slice the squash in half lengthwise and scrape out the seeds. Cut into 1/4-inch slices, and then toss the slices in olive oil and salt. Transfer them to a baking sheet and roast in the oven until tender, about 30 to 35 minutes.

While the squash roasts, cut the thick stems off of the broccoli rabe and discard. Toss the leafy ends in olive oil and salt. Place in the oven when the squash has 12 to 15 minutes left. Let both vegetables cool, then cut them into small pieces.

Bring a pot of very salty water to a gentle boil. In a 12-inch sauté pan, melt the butter over medium heat until it begins to brown. Add the hazelnuts to the pan and cook until you can smell the butter browning. Add the sage, sherry vinegar, and diced broccoli rabe and squash.

Drop the pasta into the gently boiling water. Cook the gnudi for three to four minutes, until they all float to the top.

Add about 1/4-cup of the boiling pasta water into the pan with the hazelnut and vegetable mixture and bring to a medium-low heat. Add in the gnudi and 1/4-cup of cheese. Toss continuously until the gnudi are completely glazed. Divide the pasta mixture between two bowls and top with the remaining cheese.

■ Dough not delay: “Make the dough the day before to give it time to rest in the refrigerator,” Cusher advises. “If you need to make it the day of, let it chill for at least two hours before cutting.”

■ Get nutty: “Hazelnuts are underused in my opinion,” Cusher says. He lauds the nut for its versatility, adding buttery, rich flavor to both sweet and savory dishes.

■ Sticking to it: “When glazing the pasta, add more pasta water if the sauce ‘breaks’ [when the butter or oil separates in the sauce],” Cusher notes. “If the sauce isn’t sticking to the pasta, shake in a few chili flakes—they’ll activate the starch, causing it to better coat the gnudi.”

Though he grew up in Charleston, Elliot Cusher spent many years in kitchens abroad before returning to his hometown. While in his twenties, he supported his backpacking travels through Europe by scoring jobs cooking in Dublin’s esteemed Restaurant Patrick Guilbald, as well as Le Gavroche and Restaurant Gordon Ramsey in London. Cusher later returned to the States, working in Miami and New Orleans before settling back in the Holy City to open Mercantile & Mash in 2015. The following year found him in another Indigo Road restaurant, as Indaco’s chef de cuisine. Italy may be his muse at Indaco, but his plates shine with South Carolina produce, like locally grown butternut squash and broccoli rabe. 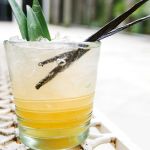 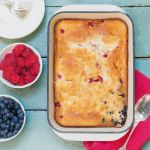 How to Make a Quick Fruit Cobbler

Get the recipe from celebrated Southern chef Nathalie Dupree 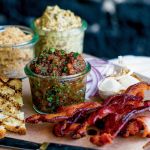 How to Make Bacon Jam