Slice of Advice
June 2011
WRITER:
Anna Evans
The season’s ripe for tomato pie—perfect yours with tips from David Barnett 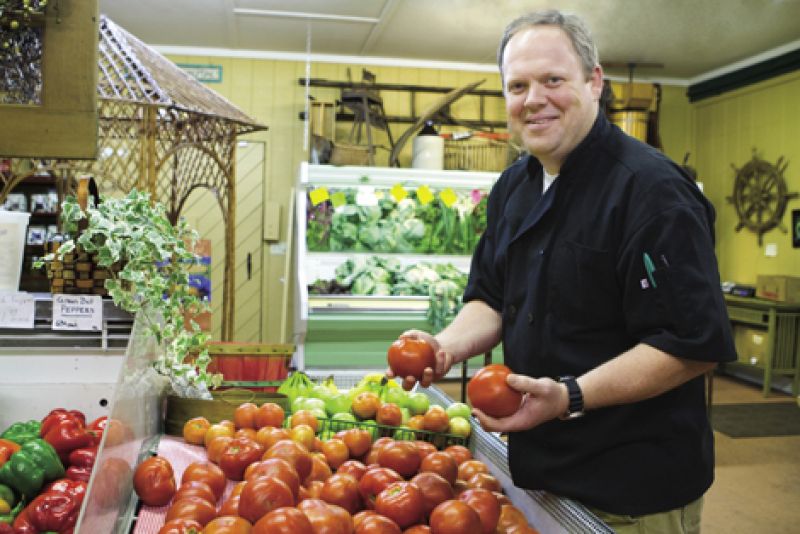 This month, fat red jewels begin ripening on vines across the Lowcountry, marking the beginning of the South’s celebrated tomato season. And for many locals, nowhere is the picking sweeter than on John’s Island. “I wasn’t a big tomato fan until college, when a friend insisted we buy some from Ambrose Farm on the way to his place on Bohicket,” says David Barnett. Today, he’s chef at that very farm’s Tomato Shed Café. “I don’t know what it is about John’s Island tomatoes—the soil they’re grown in, maybe—but they’re the best, hands-down.”


And Barnett knows produce, having grown up on a Hendersonville, North Carolina, farm. Working alongside his parents and grandparents in the kitchen, he developed a passion for food that led him to culinary school at Asheville-Buncombe Technical Community College. After an externship at Peninsula Grill, he helped open Asheville’s Boathouse, then Carolina’s and Seel’s Fish Camp in Charleston. By 2009, he was ready to step into a seasoned kitchen, and the 21-year-old Tomato Shed Café was ideal.


“To have a direct vein to so much fresh produce is a chef’s dream,” says Barnett, who incorporates the seasonal harvest into a daily menu featuring some 25 sides. Topping the best-sellers list? None other than tomato pie. According to Barnett, a stellar rendition of the dish simply requires a little extra prep time.


For starters, leech out some of the fruit’s juice, blasphemous as it may seem. “Put a cooling rack on top of a baking sheet. Salt tomato slices on both sides and place them on the rack for a half hour,” explains the chef. “The salt will pull moisture from the fruit, preventing your pie from being soggy.”


For a bit of crunch, finely chop the bacon before you cook it. “More fat can be rendered out of smaller pieces, so the meat stays crispy,” notes Barnett. Similarly, “it’s important to slice the onions paper-thin so that you can taste their flavor but don’t bite into a big chunk. Try using a mandoline.”


The resulting pie is mild enough to go with most anything, from shrimp and grits to grilled chicken, prime rib, or even a burger. “Although some customers will order the veggie plate and request tomato pie as all four sides,” laughs Barnett. You do what you’ve got to do to take advantage of tomato season.