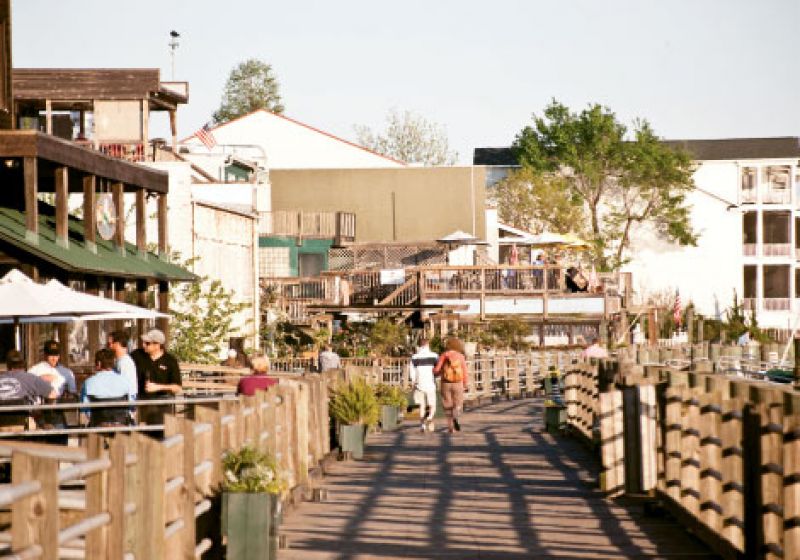 On the backside of Georgetown’s Front Street shops, the Thursday-night crowd was gathered on the deck at Big Tuna Raw Bar for the season’s first soft-shell crabs. The rustic restaurant’s proprietor, Bucky Watkins, was talking about the houseboat he’s been fixing up to use in the summer out on Winyah Bay. And all along the wooden boardwalk, sailboats, dinghies, and pleasure yachts were tied up at docks or moored in the Sampit River.

It’s all about the water in this port town of less than 9,000 residents. The Sampit, Waccamaw, Great Pee Dee, and Black rivers converge here, emptying into Winyah Bay with the Atlantic Ocean just beyond. Everyone seems to have some kind of boat. Over at the circa-1765 Harbor House, a four-bedroom inn with shrimp boats at the dock in front, Meg Tarbox says many of her guests cruise in on the Intracoastal Waterway. “For people from Charleston, this is a quick getaway to a slower pace. We’ve got three marinas downtown, and once you’re here, you can walk everywhere.”

By car, Georgetown is within about an hour’s drive up Highway 17 from the top of Mount Pleasant. As the third oldest city in South Carolina—behind Charleston and Beaufort—it has a history of European settlement dating back to the 1700s. (Some say that date could be even earlier, as there are reports of a short-lived, early-1500s Spanish settlement.) Regardless, it’s an easy place to find history. On streets like Screven, Prince, Cannon, and Queen, more than 60 houses and buildings comprise its shade-tree-lined National Register Historic District. Visitors can take self-guided tours with free maps from the Chamber of Commerce on Front Street or join walking or motorized tours, like Miss Nell’s or the Swamp Fox Tours by Geraldine Jayroe.

On a recent visit, Moonlight and Magnolias was on the marquee at the Strand Theater on Front Street and half-way through a nine-performance run. The 1940s theater is home to the Swamp Fox Players, which puts on its next stage production, Angel Street, in August. I also stopped by Harborwalk Books, a good independent bookstore with titles by local authors, and the Rice Museum’s Prevost Gallery, located below the clock in the 1840s Old Market Building. It’s a great place for gifts, and that day it was well-stocked with local art, 19th-century maps of Georgetown and Charleston, Japanese porcelain, Viennese wine stoppers, and so many other interesting items it would have been difficult to leave except that hunger was calling.

Front Street’s good for that, too. Local standbys the Rice Paddy and the River Room have been serving seafood since the 1980s. (You can go to both and do a crab cake tour, as each serves them as a specialty.) Newer additions include the just-opened Italian restaurant Portofino’s and Aunny’s Country Kitchen, offering soul food like fish and grits for breakfast and fried chicken and butter beans for lunch and supper.

Another favorite stop is the southernmost point of town, near East Bay Park at the very end of Front Street. (Get there by parking at Morgan Park and walking across the marsh boardwalk to high land on the other side.) Often nearly empty on weekdays, it’s one of the prettiest spots in South Carolina—a secluded, curved beach with sun-bleached driftwood that’s edged by picnic tables and tall pine trees. From there, you have a vantage point for a view of the broad Winyah Bay, with protected marshlands and former plantation tracts in the distance. Standing on that sand beach after touring the compact downtown can give you one more lasting view of another centuries-old Lowcountry city worth knowing.

{ The Draw }
Get past the boxy steel and paper mills, and you’ll find beautiful historic neighborhoods, natural scenery, and a spruced-up main drag (Front Street) with restaurants and shops that have rear entrances along a waterfront boardwalk.

{ The Drive }
Follow Hwy. 17 N for 60 miles and take a right onto Georgetown’s Front Street, the main business district on the downtown waterfront. Much of this drive is through the Francis Marion National Forest, so McClellanville is your best bet for a snack or gas along the way.

{ Sights & Stops }
Once in town, there are various guided tours and river cruises. There’s the Kaminski House and Rice museums, both on Front Street, and the Georgetown County Museum on Prince Street. Within a few miles, the protected 17,500-acre Hobcaw Barony has a newly renovated and expanded Discovery Center, and the circa-1740 Hopsewee Plantation now offers a traditional afternoon tea. If you like street parties, Georgetown’s popular Harborwalk Festival is held June 26, and the 21st annual Wooden Boat Show will be on October 16.