Dine Around
December 2009
PHOTOGRAPHER:
Peter Frank Edwards
With Charleston and now Greenville simmering, the eating gets better and better in South Carolina 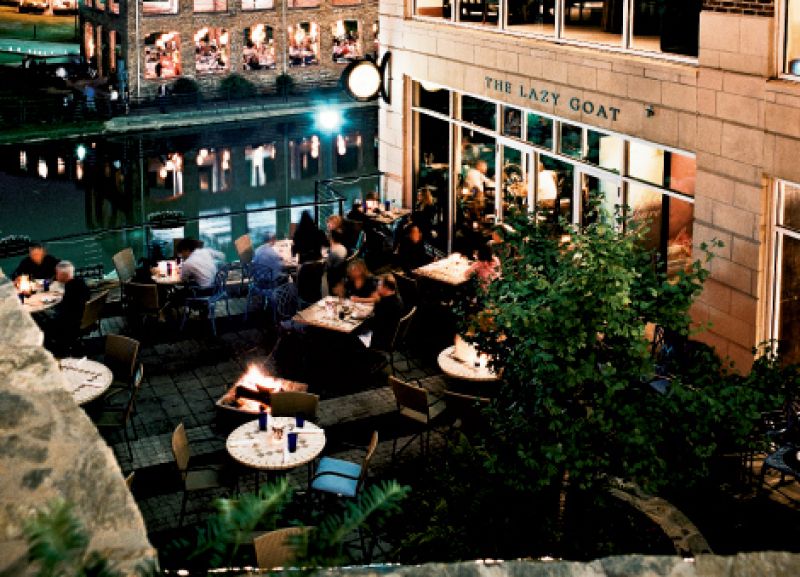 After an almost four-hour drive and a nearly 1,000-foot rise in elevation, I had my nose in a long-stemmed glass of Bordeaux. Actually, I’d get to seven glasses. It was a tasting, so there was an arc of wines around me and the 35 or so other sippers and swirlers, each glass with a small pour of French red. The setting was Greenville’s 118-year-old brick “Trolley Barn,” now home to Northampton Wines with its tasting room, bar, and café. It was a heady start to an informal eat-around weekend in the Upstate city.

You could say the trip was a bit of a drink-around, too. Several hours earlier and about 20 miles south of downtown, we’d stopped at Happy Cow Creamery and tossed back shots of fresh milk in tiny plastic cups. The big excitement at the farm that week was the debut of their strawberry milk, a new addition to their offerings of whole milk, chocolate milk, and buttermilk. A visitor-friendly place, Happy Cow even has a drive-up window. Spotted cows graze in grass pastures, and the staff will remind you that the milk is not homogenized, so the cream rises to the top. After we looked around at the farm store and watched a tractor pull off on a hayride tour for schoolchildren, I bought a bottle for the road. The cashier thanked me, adding, “Don’t forget to shake it before you drink it—get that cream mixed in real good.”

Yes ma’am, I did. That cocoa-flavored milk was gone before we saw downtown Greenville’s mix of modern and historic buildings through the windshield, the Blue Ridge Mountains just beyond. I was ready to get back to this city at the top of our state. There’s been a growing buzz in recent years about the food scene—Atlantans driving the 150 miles for a day trip or dinner and Charlestonians getting to town early to catch a meal before concerts at the Bi-Lo Center or the Peace Center for the Performing Arts. National media have been checking out the Upstate gem, too. (Esquire recently named Victoria Ann Moore, chef at The Lazy Goat, one of its “Four Breakout Chefs to Watch.”) The city’s food and wine festival, now called Euphoria and held in September, draws thousands of food followers and celeb chefs like Tyler Florence and Frank Stitt. Personally, on previous trips I’ve had top-notch sushi at Murasaki on Main Street; tasted the melty, comforting “48-hour Short Ribs” at Devereaux’s; and drunk tall glasses of hard-to-find Dutch beers in the cozy, Euro-feeling Addy’s Dutch Café. And I was ready to taste more.

Our first in-town stop was the West End’s American Grocery, one of the new wave of farm-to-fork restaurants. Through a glass window that gives a long view of the kitchen, we watched chef-owner Joe Clarke sear a beautiful little trout filet to top his smoked paprika gnocchi and sautéed chanterelles. At the bar, the bartender talked with pride and near-surprise about the changes in recent years, how a decade ago he and his friends would have nothing to do on a weekend night but drive up and down a fairly empty Main Street. Now, he spends evenings pouring wines and describing the house-infused liquors—such as aji dulce vodkas and bacon bourbons—to patrons of the busy, 50-seat restaurant.

On Saturday morning, we hit Main Street, where, from May to October, two blocks are closed to cars so people can shop for produce and crafts from booths set up along the shade-covered roadway. It was still muscadine season, so I bought a quart of those, some locally made jam, and a bag of fresh squash and peppers. The vendors are within two blocks of Coffee Underground, the landmark coffee shop that also sells food, including dinner and cocktails at night, and takes up several cozy rooms underneath a long building at the corner of Coffee and Main.

Much of that day we wandered along Main Street. It’s not hard to spend a pretty-weather day in downtown Greenville. Along the way, we stopped in Postcard from Paris, with its rooms of French antiques, and the Mary Praytor Gallery, a bright space that always has great folk and contemporary art. The sidewalks were full with crowds—going to cafés or shopping—some with dogs on leashes, others still wearing a race number from a charitable bicycle ride that had been held around the city that morning. (Greenville is home to Tour de France
veteran cyclist George Hincapie and hosted the 2009 USA Pro Cycling Championships.) And it seemed like everyone spent some time in Falls Park, where the Reedy River flows under Main Street in what’s got to be one of the most beautiful urban parks in the South. Families and couples were everywhere, picnicking, walking, and taking pictures.

All of this gave nice diversions between the weekend’s prime mission—food. For lunch, we stopped into Luna Rosa for a delicious panini, then sampled creamy caramel and vanilla gelatos at their very busy gelateria. For a break in the late afternoon, we sat on the riverfront patio at High Cotton (yes, of Charleston’s Maverick Southern Kitchens) for some people-watching and to share a charcuterie plate with house-made sausages and grainy mustards. Then at dinnertime, we had a fitting close to the day at Ristorante Bergamo, where the Italian-born chef-owner,
Nello Gioia, has been cooking his risottos and scaloppine from a small, shiny kitchen since 1986—long before the dozens of new restaurants joined the downtown scene.

And since this eat-around included a bit of drink as well, it’s worth mentioning that Gioia makes a limoncello that George Clooney is said to have taken a liking to when he was in Greenville in 2007 for the filming of Leatherheads. (This is noted on a small, framed sign on the bar.) I had the chance to meet the chef, and not only did he confirm the story, he recommended a cocktail of Campari and white wine. Cin cin! 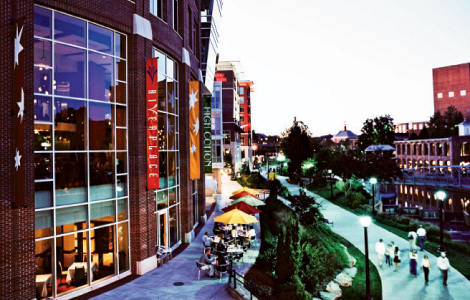 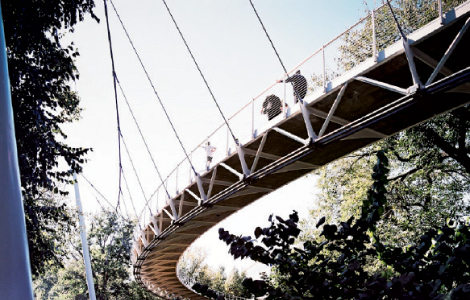 Just off Main Street, the Liberty Bridge across Falls Park draws visitors all day and glows with soft light at night.

Do:
• Walk through Falls Park and across the $4.5-million Liberty Bridge, a 355-foot pedestrian suspension bridge over the Reedy River.
• Taste the Belgian beers at Addy’s Dutch Café, 17 E. Coffee St., or go to a tasting at Northhampton Wines, 211-A E. Broad St., (864) 271-3919, www.northamptonwines.com
• See the cows and sample the buttermilk and ice cream in the farm store at Happy Cow Creamery, www.happycowcreamery.com.