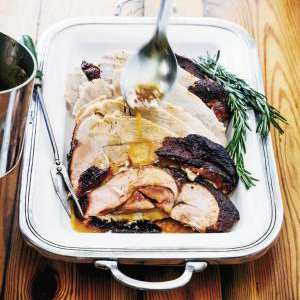 Known For: Slow-roasted & -smoked meats
Hometown: Mantua, New Jersey
In Charleston Since: 1991
First F & B Gig: In the banquet kitchen at Ron Jaworski’s Eagles’ Nest
Favorite Holiday Memory: “One Thanksgiving my oldest sister forgot to put sugar in the pumpkin pie. My brother-in-law and I were the first to try it. He took a bite before I did but didn’t say anything. He left that for me to do….”
Recipe: Bone-in smoked ham (click here)
Provenance: “This is my recipe, but it’s based on family tradition. When I was growing up, my parents would always order a fresh ham for the holidays from a butcher shop in Mickleton, an old Quaker settlement in South Jersey, just outside Philadelphia. Although it’s a simple recipe, it takes a good bit of cook time, which allows you to reflect and think about who you’re cooking it for and why you’re thankful to have them in your life.”
Chef's Note: “There is a difference between smoking a fresh ham, which is going to give you something more like a pork roast, and smoking a cured ham, which is going to give you something more like a traditional store-bought holiday ham.” 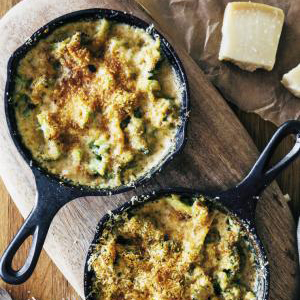 Known For: Innovative sandwiches & veggies
Hometown: Atlanta, Georgia
In Charleston Since: 2002
First F & B Gig: “Outback Steakhouse, washing dishes”
Favorite Holiday Memory: “My aunt’s chocolate chess pie—so damn good!”
Recipe: Broccoli Casserole (click here)
Provenance: “The recipe is mine, but it’s inspired by all the wonderful casseroles I’ve eaten at various holiday gatherings. Lots of times, casseroles use cream of mushroom soup, canned onions, Spam, etc. I dispensed with all that nonsense and stripped the components down to the primary vegetable, sauce, and bread crumbs.” 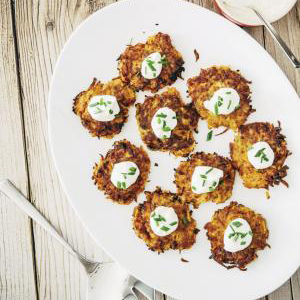 Known For: Kosher & vegan catering
In Charleston Since: Birth
First F & B Gig: Prep cook at the Harbor
Club; “I was 16 and worked after school and on the weekends.”
Favorite Holiday Memory: “Growing up, my aunt always threw a Hanukkah party, and we would eat brisket, kugel, latkes, and doughnuts. Although the food was always good, as a kid all you care about is the presents. Today, the food is more important to me than the gifts.”
Recipe: Root Vegetable Latkes (click here)
Provenance: “It’s my own. Latkes are a must for Hanukkah. Traditionally, they’re made with regular potatoes and served with sour cream or apple sauce. But since there’s no food police, I like to incorporate carrots, parsnips, and sweet potatoes; a date chutney on top finishes it off. This was inspired by my most popular side dish: roasted root veggies.”
Chef's Note: The latkes can be cooked one or two days ahead of time, covered, and refrigerated. Reheat in a 350°F oven as instructed. If freezing the latkes, arrange them in a single layer on a baking sheet. Place a sheet of parchment paper between the layers, wrap well, and freeze. To reheat, defrost the latkes, then transfer them onto baking sheets. Reheat in a 350°F oven as instructed.
Tips: Don’t overcrowd the pan; you need room to flip the latkes. Use an ice-cream scoop or measuring cup to make the latkes more uniform in size. 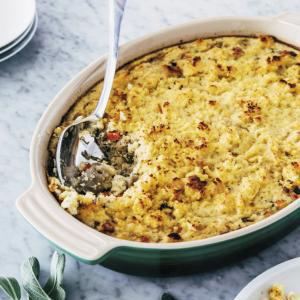 Known For: Seasonal Lowcountry larder
Hometown: Birmingham, Alabama
In Charleston Since: 1999
First F & B Gig: Schlotzsky’s Deli
Favorite Holiday Memory: “Holidays at my grandparents’ house in Savannah were the source of many great memories, from learning to fish to walking in the woods to enjoying my Aunt Cindy’s oyster dressing.”
Recipe: Oyster Dressing (click here)
Provenance: “This is my take on my Aunt Cindy’s recipe. She passed away in 2006. Having never gotten her recipe, I developed my own version. I believe she used brioche or French bread. I use corn bread.”
Chef's Note: The corn bread can be made up to three days in advance. The casserole can be assembled and kept refrigerated a day in advance and baked the day it will be served. 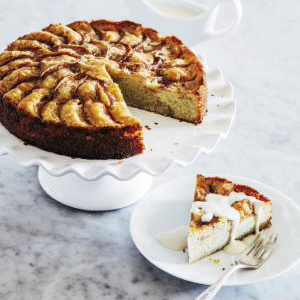 Hometown: Florence, South Carolina
In Charleston Since: 1989
First F & B Gig: Server at Angelfish
Favorite Holiday Memory: “For my nontraditional Jewish family, Christmas Eve was a big event. My mother is Swedish, so we always had a Julbord, which is the Christmas version of the Scandinavian smörgåsbord. This involves hours at the table with lots and lots of food and aquavit—and much laughing and singing!”
Recipe: Swedish Apple Cake with Vaniljsås (Vanilla Sauce). Click here.
Provenance: “It’s based on a traditional Swedish apple cake recipe. I replaced a little of the flour with almond meal, because I like the texture it gives to this cake. I also added cardamom to the batter and to the apples because it conjures up taste memories of my mother and Sweden.”