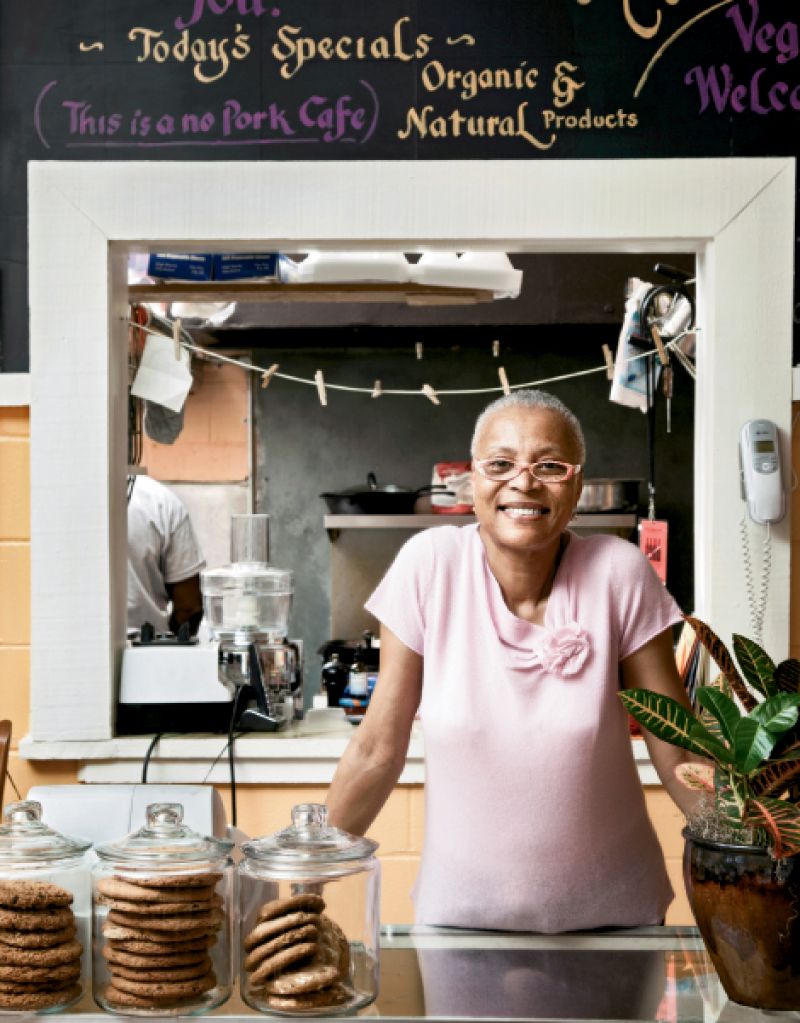 For Alluette Jones-Smalls, who opened her small, eponymous downtown café in 2008, “fresh, local, and simple—yet elegant” is what good Southern food is all about. But instead of the stereotypical steam bar crammed full of empty calories and fat, her made-to-order dishes provide a healthful take on the Lowcountry’s culinary heritage, emphasizing fresh veggies versus rendered lard. She’s dubbed her genre “Holistic Soul,” and its cornucopia of done-over dishes has landed her on the pages of national magazines like O, The Oprah Magazine, as well as on scores of foodie blogs, each mention heaping praise on what the Mount Pleasant native is cooking up.

Organic produce from Joseph Field’s Farm on John’s Island lands center stage at the Reid Street restaurant year-round, and to celebrate spring being in full swing,  Jones-Smalls orchestrated this menu loaded with seasonal vibrancy. Take note of the savvy work-arounds the cancer-survivor utilizes to celebrate good health without sacrificing good taste: Smart Balance stands in for traditional butter; olive oil is metered with a small spray bottle; sautéed Vidalia onions (instead of refined sugar) are slipped into a dish that needs a boost of sweetness. A few bites testify these are tried-and-true ideas that yield plenty of flavor, nourishment, and, of course, soul.

Salad
With the first flush of asparagus from the fields, Jones-Smalls pairs tender spears with farm-fresh eggs. Even when topped with hollandaise, the dish is still light and emphasizes the vegetal qualities of the asparagus. She is careful not to overcook them, aiming for a slight crunch that pairs well with the richness of the eggs and creamy sauce. Chives and dill provide interesting accents but are far from afterthoughts. “You want to taste herbs and spices used in cooking,” Jones-Smalls says.

EntrÉe
When Jones-Smalls lived on St. Helena Island, she created Chicken Helena—breasts stuffed with mushrooms, spinach, caramelized onion, and feta cheese—in the same kitchen where Frogmore Stew was purportedly invented. With her return to the Holy City, she renamed it Chicken Charleston. Seasoned with sea salt and thyme, the chicken rolls are gently baked and topped with the first tomatoes of the year.

Side
“Every black family had a carrot garden,” Jones-Smalls says of her childhood in Mount Pleasant’s Old Village. That recollection inspired this root vegetable sauté that gleans subtle heat from ginger and sweetness from Vidalia onions.

Dessert
“This is the Neiman Marcus of bread pudding!” Jones-Smalls says as her husband slices strawberries into a bowl of organic, whole-grain wheat bread. She says the fresh fruit and the agave nectar drizzled over the mixture have a bit to do with the dessert’s considerable success. The dish is so popular, “I’m passing the torch to Cliff, because it sells so fast. I can’t make it all,” says Jones-Smalls.