Warehouse
November 2013
WRITER:
Jeff Allen
If someone asks you where to get the best pork rinds in town, you can send them to Warehouse with confidence. 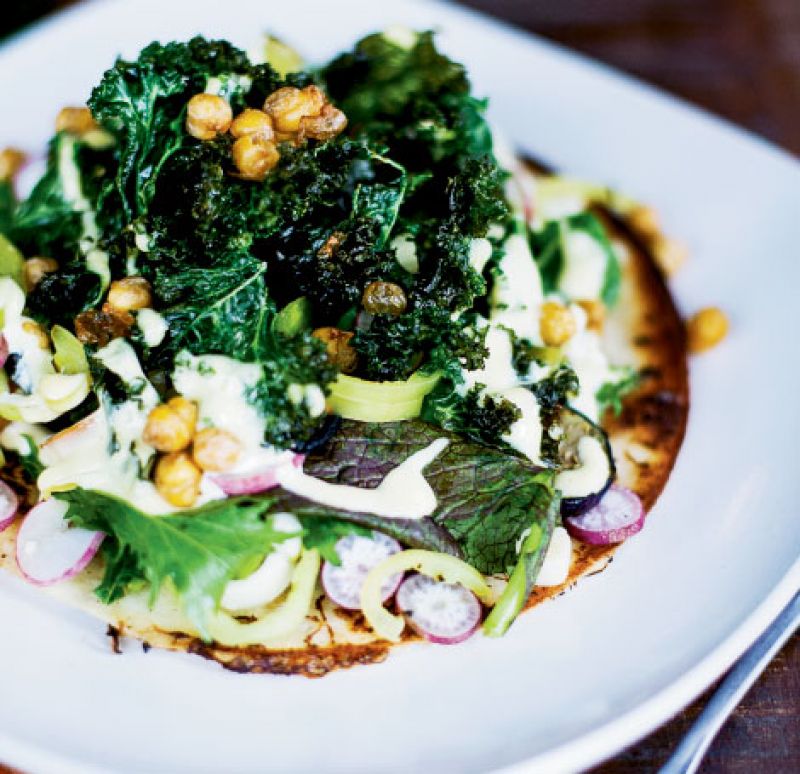 The crackle-pop texture, the way they stickily lodge themselves in the farthest reaches of your molars, the ribbons of pimiento “cheese-wiz” that snake their way through the mighty stack: all of these are reason alone to stop by.

You’d be lucky to spot the place strolling through the gentrified streets of Elliotborough. It brings no particular attention to itself, situated a block off the main King Street drag, devoid of neon, or much of anything in the way of signage for that matter. But what begins as a heavy door guarding a hole in the wall opens to a light-filled cavern of concrete and corrugated steel. A lone utility ladder hangs on the rear wall in a way that suggests it might be used regularly to service the pendulous light fixtures that illuminate wooden shelves heavy with liquors.

Groupings of lounge furniture buttress the entrance, pool and foosball anchor the rear, and an enormous bar stretches between. A few tables are strung along the wall and community high-tops down the middle, but on a packed Saturday night, it’s no place to eat. Warehouse walks like a bar—and that’s a shame, because it talks a game of delicious fine food.

Executive chef Eva Keilty, whose career hopped between Ted’s Butcherblock and various spots in California before settling back in the Holy City, serves a menu warranting serious attention. Certainly her masterful deviled egg topped with curried local shrimp deserves a bit more reverence than the vocals of Pearl Jam’s “Yellow Ledbetter.” The shelves above the bar hold 117 different kinds of liquor but lack grenadine. They can’t make a third grader a Shirley Temple.

You’ll forget those quibbles when the “Farmer’s Plate” arrives. I imagine it changes with the season but retains a sprite lightness that belies the crispy fried kale and crunchy chickpeas atop (also fried). Fennel, palm hearts, and yellow squash float around in there. Chimichurri and saffron-cured egg yolks soak deeply into the West Indian-style roti flatbread you’ll use to clean the plate.

The Merguez meatballs dunked in eggplant dip and field peas are a bit forgettable, but the “Memphis confit wings” walk the line of fine bar food. I’d order them just to get a taste of the charred corn pudding with which they’re plated. Besides, have you ever been served bar wings with a pickled-ramp ranch dressing? Me neither.

Perchance Warehouse is the new Husk Bar? Given some smooth leather booths and servers in long butcher aprons, Eva Keilty could give Sean Brock some competition in the genre of gentrified pub fare.

When the “best of” lists begin jockeying this year, perhaps an entire section of “Grown-up Grilled Cheese” on the menu will encourage a nod for Keilty. It certainly won’t hurt that one is smashed together with beer-braised beef brisket and braised “French” onions. Another features house-made chorizo and Manchego cheese. My favorite slathers up smoked pimiento cheese and candied applewood-smoked bacon.

Real skill shows on the charcuterie board. Keilty’s time at Ted’s Butcherblock surfaces in the form of perfect pâtés and sausages. Homemade pickles and multiple mustards support a rotating staff of excellent forcemeats. The mortadella, so often found as a rubbery afterthought, is a revelation, the texture silk and the seasoning subtle and mysterious. The liver pâté could only be rivaled by Mike Lata’s Meeting Street masterpiece at FIG.

For dessert, the stack of French toast smothered in fresh fruit and agave and rum syrups certainly won’t disappoint, but you’ll look up from such a satisfying culinary adventure and wish you weren’t in a bar—that Keilty had a slightly better stage on which to perform, that the food was slightly more important than the foosball. But Warehouse is large, and a new business with a limited budget must stretch it thin and serve a target audience the fare they demand. If more folks begin showing up to eat than party, a few booths and proper wine service might be in order.

To serve fine food you need serviceable tables and chairs. To be a bar, perhaps it would be wise to keep a single bottle of grenadine in the house. It lasts forever.

THE DRAW: A speakeasy gem in the heart of Elliotborough
THE DRAWBACK: If you’re looking for dinner, the menu may be a little sparse.
DON'T MISS: The Farmer’s Plate
PRICE: $5-$14