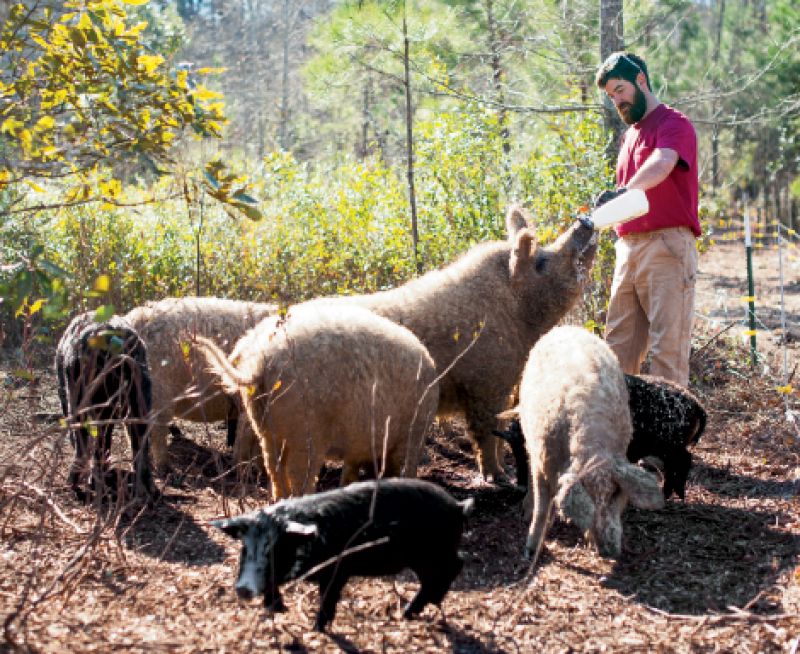 What’s it take to breed the perfect pig? That’s the question on J.L. “Tank” Nicholson’s mind. The heritage hog farmer has a herd of 250 on two farms and is on a mission to blend just the right porcine genes to produce the ultimate charcuterie-, barbecue-, and bacon-making swine.

But crafting such a genetic cocktail (a science that must be carefully approached) calls for exotic ingredients, including pig breeds nearly forgotten. “I got interested in pigs after tasting the best pork chop in L.A.,” remembers Nicholson. Curious to discover the meat’s origin, he did some research and found the delicious chop came from a Mangalitsa, a lard breed native to Hungary that looks more like a fuzzy lamb than a pig and is renowned for producing great charcuterie. “My business partner, Stevan Tuck, and I decided to raise them to sell to friends.”

Today the partners’ Holy City Hogs aren’t just Mangalitsa, but Durocs known for their juiciness, super fatty Berkshires, Tamworths (lovingly called the “bacon pig”), American mulefoots that have an “unctuous greasiness,” guinea hogs with plenty of back fat, and Hampshires—one of the oldest American breeds—loved for their lean meat.

And thanks to chef demand, Nicholson has recently begun cross-breeding. Pitmaster J.B. McCarthy has requested a Berkshire/mulefoot cross to take to the Memphis World Barbecue Cooking Championship in May. “The most important thing in slow smoking a pig is the amount of fat in the muscle,” says McCarthy. And that’s what Nicholson hopes to deliver. “We’ll finish J.B.’s pig on oats, molasses, and peaches, and it will produce a deep red, deliciously marbled meat,” says Nicholson, who’s also got barbecue impresario Rodney Scott interested in his plans—in fact, one of Nicholson’s Yorkshires was cooked at the “Rodney in Exile” finale dinner last month in Charleston.

Chefs such as Fat Hen’s Fred Neuville and Two Boroughs Larder’s Josh Keeler are on board, too. “What appeals to me is Tank is open to raising exactly what I want, modifying the characteristics of these animals to fit my needs,” says Keeler. “Being a smaller restaurant, I prefer smaller hogs. Tank is working on a cross between a guinea and a Duroc that should be the optimum size for us.”

Cured meat guru Craig Deihl is more cautious. “Mangalitsa, because of their high fat, need to be bred with lean varieties to provide flavorful profiles,” he says. “But, if he can make a pig that has no more than one inch back fat and rich red meat, I’m willing to try it.”