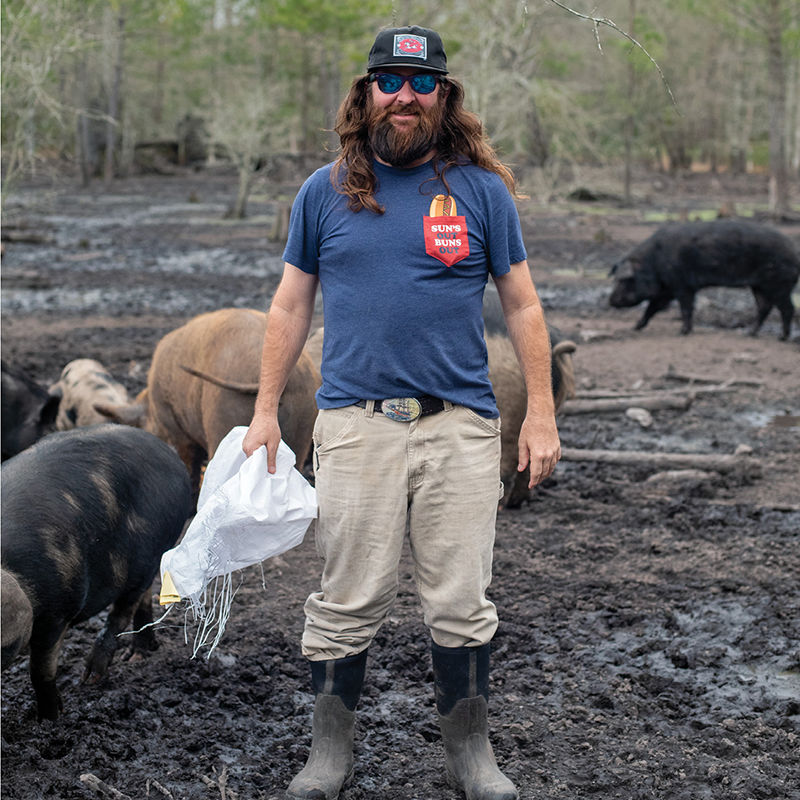 CM: Is farming in your family?
TJ: I grew up in southwest Georgia; we call it “Sowega.” We didn’t have a farm, but we loved cooking out with Dad. He’d pick up all kinds of meat from the butcher, and I’d go around collecting sticks for the fire. I was just a helper until I turned 12 and got to handle the food.

CM: When did you decide to go into the pig-raising business?
TJ: My father-in-law owned a large track of land on John’s Island. In 2011, I rented a bulldozer and backhoe and graded it all out so my wife, Christian, could train her horses. She eventually moved the horses elsewhere, so a friend suggested I raise pastured pork. I really didn’t know anything about pigs, but for two months, I fully immersed myself into researching everything. I eventually came to the conclusion that a lot of people could raise pigs, but only special people could raise rare ones. I figured it would be a niche market, and it would be better to have a few really special pigs than a lot of regular ones. At the very least, I thought I could have some kick-ass barbecues.

CM: What kinds of pigs do you raise?
TJ: We have eight or nine different purebred pigs at a time that we crossbreed. Typically, when you cross two animals, they will be bigger, faster, and stronger than either of the purebreds; we call this “hyper vigor.” It allows us to get desired traits (nice hams, intramuscular fat, and big shoulders), which hopefully will carry on to the next generation. One example is our Sowega King, a hog that utilizes about 10 different breeds. We also maintain a pure line of Ossabaw Island pigs to keep this very special breed around for years to come. It sounds crazy, but you have to eat them to save them. As long as they’re in demand and viable, farmers will raise them.

CM: Do you raise the pigs from birth?
TJ: Yes, we have what’s called a farrow-to-finish farm, meaning we have the mama and daddy pigs (sow and boar), and they breed to make piglets. We can pull those pigs at any point in their lifespan depending on what the customer is after, meaning you can get anything from a 12-pound, three-week-old suckling to a 500-pound, six-year-old fat-back sow.

CM: Do your farming practices change in the winter?
TJ:
Not exactly. It takes 28 days to flavor a pig. We always feed ours milk, oats, corn, plus seasonal produce, so the flavor definitely changes throughout the course of a year.

CM: You don’t have any full-time employees. How does that work?
TJ:
Without my wife, none of this would be possible. She was a large animal vet technician, so she had field experience before we started Holy City Hogs. I go to New Orleans, New York, and Nashville often; she cares for the 75 to 150 pigs we have on the farm when I’m gone.

CM: You’re on a first-name basis with many Charleston chefs. What draws them to you?
TJ: If you look at my clients, I have Italian, new Chinese American, French, and breakfast places buying whole or half animals for different styles of food that all have an element of their menu that’s pork-centric. We pride ourselves on whole-animal usage, and those restaurants are placing orders every week or so. Food brings everyone to the table—but pork especially. 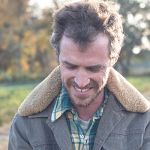 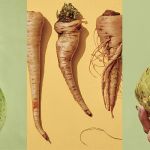 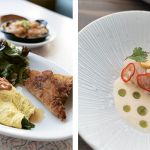