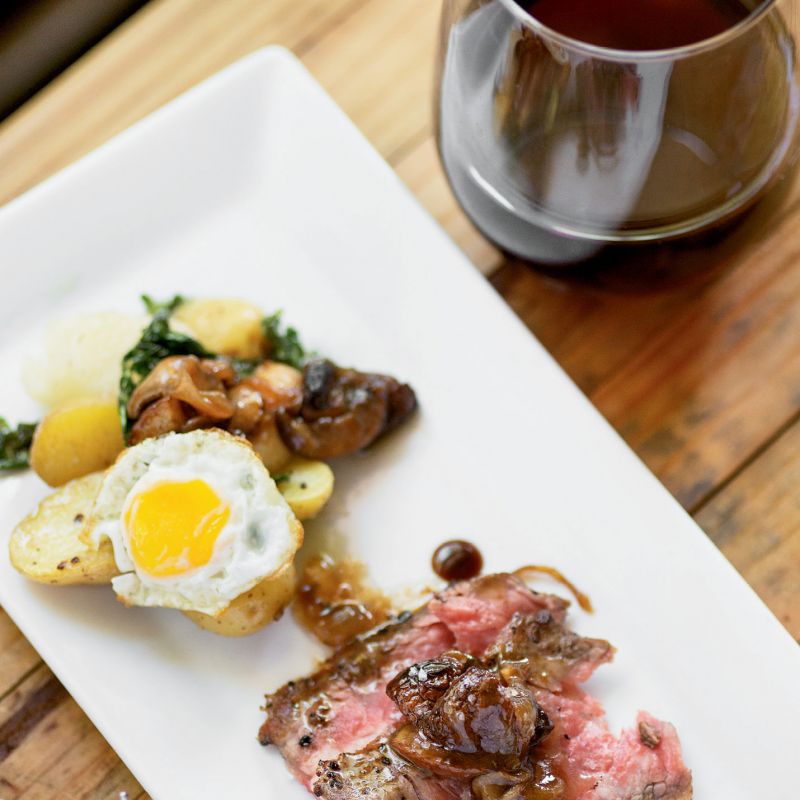 They said it might take two weeks to get a seat at R. Kitchen, but a lonely Tuesday night offers up two on a day’s notice. As on most evenings, a small group gathers in the dusk outside, waiting for the nondescript door to swing open. As we amble up to the bar seats that overlook open stoves and mismatched shelves piled high with sundries, the full R. Kitchen concept comes into focus. The motto states this as “a kitchen, not a restaurant.” And from the opening note to the final pour of wine, this defines a unique dining model, unlike any other in town.

A server attends to the seating, offering a limited selection of approachable wines; the occasional replacement of a fork, knife, or napkin; and of course, the bill. But the real operators here are executive chef Josh Woodruff and sous chef “Cham” William Boyd. (R. Kitchen’s owner, Ross Webb, was the original chef; Woodruff is at the helm now.) They duck and dive amongst a menagerie of pots and provisions as flames leap from pans gurgling on the well-worn stove. An introduction explains the concept and the promise of a custom meal, developed daily. The pair sources locally when feasible, often heading up the street to the Vegetable Bin and down towards the river to Crosby’s Seafood. A chalkboard displays the day’s five courses; when a few of the dozen or so diners with dietary restrictions air them publicly to the chef (the vegan in the corner also claims a gluten intolerance), Woodruff happily obliges with suggested changes on the fly. It’s a marvelous ballet to witness: five courses customized and presented in a two-hour span, set to an unwavering soundtrack of Michael Jackson.

The food, like the banter emanating from the cooks themselves, remains relaxed. Too casual, some may say. But when paying a mere $30 for five courses, perhaps a full measure of fine-dining criticism should remain muted. The menu also hints to a more laid-back Charleston that I often miss these days. On this night, there are “Oohs” and “Ahhs” when a beautifully crusted fish fillet, crackling with a fine dusting of rice flour, buttresses a scoop of creamy grits pooling within a decadent lobster cream sauce. Sautéed shrimp (arriving in sync with the thumping crescendo of Jackson’s “Beat It”) deliver a decidedly Asian theme, nuzzled into a perfectly executed risotto of sorts spiked with ginger and napped with a sweet and piquant sauce ringing with a vibrant shot of saffron and Sriracha.

As the meal progresses, I notice that the chalkboard lists the dishes a bit differently and wonder about the veracity of their “daily menu” claim. The “London broil with whipped mashed potatoes, asparagus, and sauce Bordelaise” seems rather unseasonal, and there isn’t an asparagus spear in sight—local or imported. But I’ve paid over $60 a pop at fancy grill rooms for steaks of decidedly lesser quality, so we can call it a win.

Instead of being disappointed by the simple butternut soup or salad of bagged greens, marinated veggies, and vinaigrette that I could’ve executed in my own kitchen, I’m thankful that Woodruff did the cooking tonight. I leave smiling and satisfied, overjoyed that my wife and I can mosey downtown and get a meal at once delicious and affordable, without having to dissect the provenance of a dozen foraged ingredients and mind-blowing avant-garde culinary techniques. We need more of what R. Kitchen is selling these days: neighborhood places where craft and personable service predominate without requiring a second mortgage. Sixty dollars for two is a date night that can occur outside of anniversaries and Valentine’s Day extravaganzas.

Perhaps we’ll make a regular reservation at R. Kitchen, where the chef knows we’re coming and considers all things requested from the last visit. It’s the kind of spot that thrives on such interaction between chef and diner—and that makes it a place to visit.

The Drawback: Reservations come at a premium, and it’s advisable to book early.