Art of the Chase 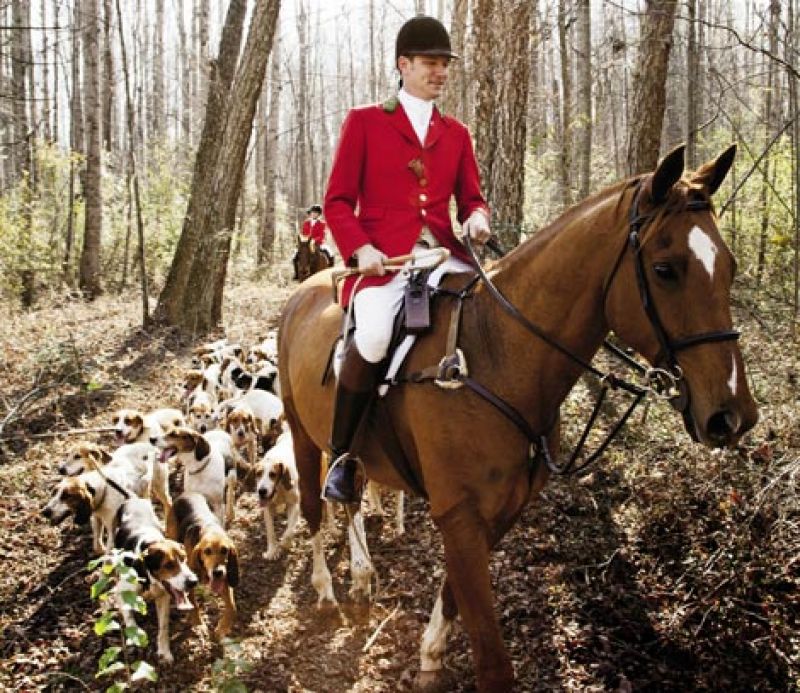 Everything is hovering around 30 on the morning of the fox hunt in a rural corner of Greenville County.

The Upstate air is a frosty 30 degrees, and today the count for the Tryon Hounds’ hunt is a field of about 30 riders on horseback with 30 yelping hounds. Anita Williamson, the “road whip,” has offered to let us ride in her truck to tail the party once the chase begins—throughout the hunt, she’ll follow the riders’ progress, open fence gates, and watch for any stragglers—canine or equine.
This is one impressive and natty hunt club. Attire of the men and women at the meet includes white riding pants, black wool caps, and brass-buttoned blazers that are as red as a holly berry. The well-groomed horses sport trimmed or braided manes. The day’s huntsman, Jordan Hicks of Pickens, is tall and trim in a scarlet coat. He opens the gate of a transport truck and releases the lanky, tricolor hounds. The carefully bred foxhounds bound into a scene of winter-bare trees and country pageantry as one twisting mass of yelps and sniffs. The pack is bursting with energy and confidence. Watching them, I wonder if they know they’re descended from old Virginia bloodlines.

GETTING FOXY
Joining this hunt as a first-time spectator, I do some mingling and chatting with the participants beforehand. Williamson tells me that a gray fox can “climb as well as a cat” and can lead the chase to a tree where it will ascend to high branches or disappear inside a hollowed-out trunk. (She remembers once waiting motionless for an hour after a hunt—after all of the other horses, riders, and hounds had left—to see the fox finally emerge from its hiding place deep inside a tree.) But I quickly learn that a bigger draw than whether or not a red or gray fox gives chase is that the riders get a lively and exclusive jaunt in the forest. By permission of landowners, the club hunts regularly in private stretches of woods, trails, and farm fields near Landrum, Tryon, and elsewhere around these edges of northwest South Carolina and southwest North Carolina.

It’s a striking scene for a bystander. Hicks sounds a horn that’s made of copper and silver, and the line of hooves and paws starts off into the stark winter landscape, looking like something from a century-old British novel. (The sport dates to the 1700s in England, and the Tryon Hounds club traces its beginnings in the Carolinas to the 1920s.) Meanwhile, Williamson takes us to viewing points, following narrow roads and rutted farm lanes. We’re not the only ones there to watch. I see other people with binoculars in a couple of plush sedans along the route. At farmhouses, pajama-and-robe-wearing residents watch from porches and sip from steaming coffee mugs. “The pack has strung out,” Williamson says after we’ve been following the hunt for about an hour. “The scent is not hot today.”

We actually did see a gray fox dart into the woods at dusk the night before, just a few miles away on the nearly 200-acre grounds of The Red Horse Inn, where we’re staying. (The surprise sighting was on our way to a roasted duck dinner at the tavern-cozy Stone Soup, where walls are filled with photos and paintings of horses, jockeys, hunts, and hounds.) But neither that blur of a fox or any other is showing up for this morning’s hunt. In any case, sporting traditions call for a post-meet brunch back at the inn.

POST-HUNT SIPPING
Walking into the handsome main lodge at the Red Horse Inn for the club’s brunch of hot soups, biscuits, and wine, I realize I need more tweed in my life. This après-hunt social draws a couple dozen more people than the hunt itself did—many of the men and women are dressed in a splendor of wool, tweed, and thickly knotted cravats. We walk out on the terrace for views of the hilltop inn’s horse pastures and of the nearby Blue Ridge Mountain peaks, and we go easy on the wine. It’s still early on a gorgeously sunny afternoon, and I want to drive out for some touring of the countryside.

Our first stop is the town of Landrum about 10 miles north, where several street signs note that the parking of horse trailers is welcomed downtown. Antiques shops and boutiques line Trade Avenue and East Rutherford Street. Two of my favorite stops are in the rooms filled with tall dressers and soft vintage couches at Voyageur’s Antiques, and then around the corner at Architectural Warehouse, with its deep stacks of antique doors and stained-glass windows leaning against the walls and all sorts of wood furniture and ironwork in between. After browsing awhile in this equestrian-minded town, we decide to dip into North Carolina to a new winery that’s just 10 miles from Landrum.

A friendly flock of hens wanders up as we step out of the car at the 75-acre Overmountain Vineyards, which bottled its first vintage in March 2011. Before I close the car door, a resident Jack Russell terrier—I later find she’s named Maggie—tries to jump into the floorboard. We walk up to the cabin-like tasting room and soon also meet the winemaker, Frank Lilly, and his Great Dane sidekick, Jackson. With people and animals all peaceably gathered, Lilly leads us through a tasting of the vineyard’s chardonnay (crisp, no oak), Kings Mountain Rosé (coppery in color, dry), Revolutionary Red (light blend of cabernet sauvignon and cabernet franc), and a fig-sweet muscadine. Lilly explains that muscadine is a must at his winery because “Southerners have a primordial connection” to the native grape.

Lilly also pours a taste of what he says will be their signature wine, a petit manseng from a grape that grows in a loose bunch and that he claims does as well in the humid climate of North Carolina as in southern France. The Tarheel State has stepped up its winemaking in recent years, now with more than 100 wineries. From Landrum, you could make a nice little wine tour—to Overmountain and then back into South Carolina to Victoria Valley Vineyards, a family enterprise we’ve visited often that’s just off the Cherokee Foothills Scenic Highway in Cleveland.

After the tasting and a return to the inn for a quick change of clothes, we drive to the small Blue Ridge city of Travelers Rest to meet a friend at the Café at Williams Hardware. Dinner is served only on Friday and Saturday nights here, and the long cinder-block building is packed and buzzing with customers when we walk inside. The sisters who operate the place, Joyce and Nancy McCarrell, are standing together near the front door. “This was supposed to be a gift shop with a snack bar,” Nancy says, as she looks around the room, seeming almost amazed at the success. “A few years ago, all you could get was coffee and a slice of cake.”

On this night, a band is playing blues, the kitchen staff is cooking up “peachy chicken” and shrimp and grits, and people are stopping by the pastry case to choose slices of German chocolate or coconut pie. We slide right into chairs, order, and soon dig into the Southern-steeped entrées, and later, some of that deliciously creamy chocolate pie.

MOONLIGHT & BRIDGES
What do people do after a fox hunt, wine tasting, and hardware-store dinner? Step into an outdoor hot tub under a full moon, that’s what. The tin-roofed cottages at The Red Horse Inn are stocked with candles, fluffy bedding, and robes, and the Grainary Cottage where we’re staying features a private patio with a bubbling hot whirlpool tub. You can’t resist. (Well, I couldn’t.) In the morning, after I sit with my coffee and yogurt by the cottage’s fireplace a while, we decide to go on a hunt of our own—a hunt for bridges. I have a copy of the “Self-Guided Tour,” a printed list created by the inn’s owners, Mary and Roger Wolters—who, by the way, met while in art school in Manhattan in the 1970s and built and decorated the cottages after Mary saw the hilltop property and “thought I’d died and gone to heaven,” she says.

Within a couple of hours, we locate four nearby bridges—the red wooden Campbell’s Covered Bridge (1909) with picnic tables, parking around it, and a creek rushing below; the Klickety-Klack Covered Bridge (2000), named for the noise it makes when you drive across; the Ballenger’s Mill & Covered Bridge with private houses and horse pastures all around and a mill wheel that still turns (1800s mill, 1900s bridge); and finally, the oldest span in South Carolina, the Poinsett Bridge (1820), set deep in the woods and built of stone with a Gothic arch.

Standing there wrapped in sweaters and gazing at the beautiful bridge would have been a great finish to our winter getaway, but this Upstate weekend isn’t over until we circle back to Landrum one more time. At an antiques shop we visited the day before, I spotted (and tried on) something I can’t get off my mind—a vintage fedora that fits perfectly. And it just happens to be made of a handsome, hunt-worthy tweed.