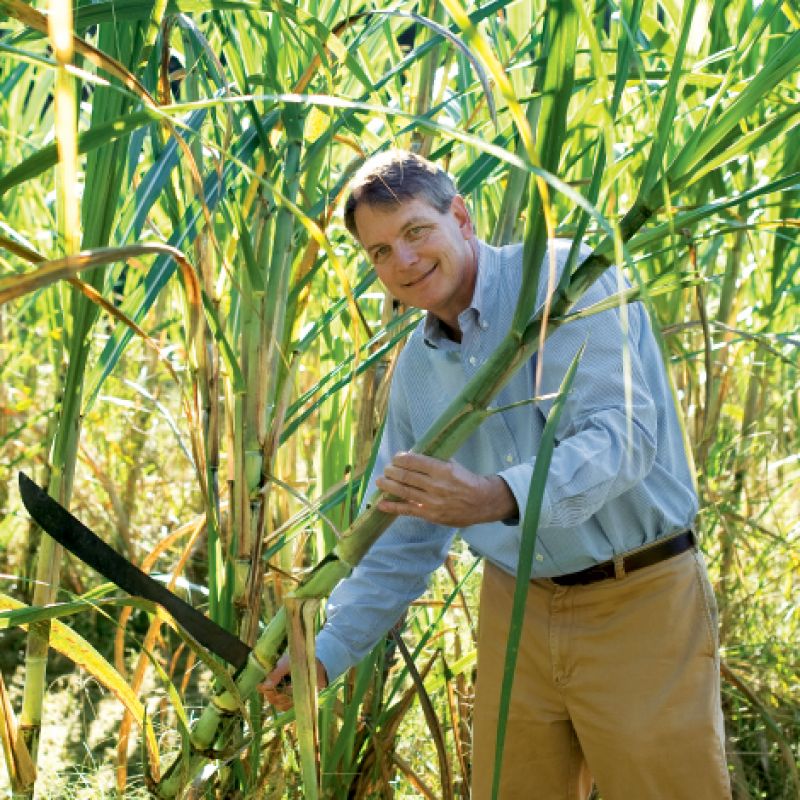 Until the end of World War II, when Southerners brought syrup to the table, cane was king. Cane syrup, with its unique mellow sweetness, was streamed onto short stacks and hoecakes, dribbled over corn bread, and sopped up with countless hot biscuits. Sugarcane-filled fields from Louisiana to Florida provided the region’s sweetener before cheap post-war refined sugar laid claim to its pots and pitchers. Steen’s cane syrup still reigns in the Bayou State, where it’s produced, but otherwise, sources today are limited to small artisan producers and homemade batches.

“Cane syrup imparts an earthy rich sweetness that is unusual to our modern palate,” opines Jimmy Hagood, a blue-ribboned pit master and owner of gourmet food producer and catering business Food for the Southern Soul. “I use it as a substitute for sugar in all foods and drinks. It adds a real depth of flavor.” Hagood should know. His family has been planting sugarcane and cooking cane syrup old-school for over a decade on their ACE Basin retreat, Lavington Plantation. Cane syrup is Hagood’s go-to when cooking wild game. An avid sportsman who first hunted with his dad at the age of eight, he uses it to make a mean wild-game marinade. “It tenderizes,” he explains. “The spices and cane syrup work together to eliminate any ‘gamey’ flavor while coaxing sweetness from ducks, quail, and doves. The marinade provides needed ‘fat’ and flavor to venison roasts, serves as a mopping sauce for game on the grill, and mixes in with ground venison for a tasty burger.”

Hagood also uses cane syrup to give his Old-Fashioneds a Southern twist. And he cooks up a savory cast-iron skillet corn bread sweetened only by a kiss of cane, though he admits to liking an extra drizzle of the syrup once a crisp hot slice hits the plate.

Most conventional pecan pies are made with Karo’s highly refined corn sugar syrup, but Hagood’s preferred cane syrup produces a pie with a rich yet more nuanced sweetness. “The earthiness of the cane really complements the pecans, and the chocolate and cane syrup marry perfectly,” he says. “The result is also a firmer textured pie.” If you’re ready to try cooking with cane, Steen’s syrup is widely available online. While supplies last (80 gallons of cane juice only yields eight gallons of syrup), Hagood’s own Lavington Cane Syrup is sold in eight-ounce jars at his barbecue ’Cue-Osk in the City Market, as well as online at www.foodforthesouthernsoul.com.

Dishing it up with Jimmy Hagood

How you know him: As the owner of Food For the Southern Soul and ’Cue-Osk
First F&B Gig: Delivering pizzas in New Orleans, circa 1975
Education: Bachelor’s degree in forestry from Sewanee, The University of the South
Favorite Local Ingredient: White roe shrimp
Recipe He'll Take to the Grave: “My original tomato-based barbecue sauce”