The antebellum manses that dot the peninsula have long made preservation-minded architecture buffs swoon. But it’s sleek, big-city skylines that make Rich Yessian’s heart go pitter-patter. Since moving to the Holy City in 1998, the design-savvy entrepreneur—he’s co-founder and technology director of digital marketing agency Blue Ion—has savored its small community and slower pace of life. He also holds a deep reverence for Charleston’s fine historic buildings. But when it came time to design his own residence, the D.C. transplant dreamt of an abode that better reflected his contemporary tastes—without sacrificing a downtown address.

The result? A striking angular condo in the sky, built atop a circa-1858 structure at 301 King Street that houses an Apple Store on the ground floor and Blue Ion’s offices on the second level.

Yessian worked closely with architect Kevan Hoertdoerfer, who also oversaw the renovation of Blue Ion’s office space, and general contracting firm Renew Urban to conjure the glass, steel, and fiberglass structure smack dab in the middle of historic downtown. The groundbreaking design makes for a rare contemporary addition to Charleston’s skyline—no small feat given the city’s preservation groups and stringent architectural review board. But to hear Yessian tell it, the plans for his trailblazing residence evolved naturally, with relatively few hiccups.

Rewind about a decade, before the peninsula’s big development boom. With Blue Ion growing quickly, Yessian and his partners—creative director David Wood and strategy director Robert Prioleau—decided to move the biz into new digs. They took over two floors of a building at King and Wentworth, a space that’s now home to boutique hotel The Restoration. The change in environment led to something of a design epiphany for Yessian. “The building was downtown and historic, but it was also a loft space with a wide-open layout and rustic details, and that all felt modern,” he says. “I’ve always been interested in city life and more modern architecture; I began to see potential for that to exist here.”

The web developer was so inspired by the space that he carved out an apartment for himself within it. He found it freeing to live and work in such close quarters: “I tend to work a lot, so the more convenient it is to do so, the better,” he says. The arrangement lent itself to his formerly fluid schedule of business and play. “I’d wake up and make a pot of coffee, then work a bit; go out for exercise or go to the beach, then come back and work; take a break for dinner, then maybe work until one in the morning.”

The then-bachelor had found a lifestyle that suited him. But in 2007, when the lease ran out, the firm purchased what Yessian and his partners hope will be its permanent home: a section of the second floor at 301 King, another loft-like space. The one bummer? There was no obvious nook within the layout where Yessian could make his home, and he’d grown accustomed to the luxury of a 30-second commute.

He began thinking outside the box, musing on small, cloud-kissing condo modules he’d seen perched atop older buildings in cities such as Boston and New York. “I thought: what could be better?” he says. “So the air rights, or the ability to build up, were part of the negotiation when we bought the second-floor property.”

With those rights secured, Yessian started riffing on design ideas with old friend and architect Kevan Hoertdoerfer (the two met as teammates on a rec soccer team), and the pre-fab module concept began to blossom into something bigger. From the get-go, they looped in folks from the City of Charleston as well as Historic Charleston Foundation and the Preservation Society. “We weren’t trying to jump too far ahead and shock people with some big reveal,” Yessian notes. “It was a step-by-step process and collaboration, rather than an ‘us versus them’ mentality.”

With input from these groups in mind, Hoertdoerfer, whose commercial portfolio includes renovation projects for food-and-bev fixtures such as Taco Boy and Leon’s, sketched out a 2,300-square-foot home in the sky with an additional 1,700 square feet of outdoor space, including a green roof, open-air shower, hot tub, indoor-outdoor bar, and plein-air living room. Incorporating large expanses of glass, his design ensures the site’s breathtaking views—which stretch as far as the Arthur Ravenel Jr. Bridge, Patriots Point, and beyond—permeate the interiors, too.

The abode features two distinct wings: one devoted to sleeping and bathing, the other to more public living and cooking spaces. In the living room, reclaimed barn doors open to an intimate center courtyard that in turn gives way to a wide-open green roof, equipped by local firm Green Roof Outfitters with solar panels and heat-resistant succulents. “The exposure slowly increases until you’re on the roof with 360-degree views,” Hoertdoerfer says.

The abode maximizes the allowable area for building, which happens to be set back, invisible from King Street. But it’s not completely secluded: a College of Charleston parking garage and dormitory overlook the site. With all that floor-to-ceiling glass, Yessian didn’t want to have to constantly adjust window treatments. So he dug up a photo he’d snapped of a building that caught his eye on a trip to Innsbruck, Austria; the structure was accented with wooden louvres arranged in a graphic pattern. Hoertdoerfer reimagined the wood beams as fiberglass panels that can be adjusted to control privacy. The undulating panels serve a stylistic purpose too, upping the design ante and making a bold, modern statement.

Because the condo’s sleek silhouette can be glimpsed from Liberty Street and parts of the CofC campus, the contemporary structure instantly became part of downtown’s storied landscape. And Yessian and Hoertdoerfer are proud of their contribution. “Cities need to evolve; I don’t think any vibrant city should be completely stuck in a certain time period,” Hoertdoerfer says. “Every generation needs to add a layer. As long as it’s well done, it adds to the context of the city.”

The abode itself makes such a strong statement that Yessian—who tackled the interior design himself—kept the furnishings minimal and modern. Bold details, such as cobalt-blue cabinetry and a wall painted with Sherman Williams’s “Outrageous Green,” make a big graphic impact. Wood, reclaimed from a barn in Kentucky, covers the ceiling and one wall in the living area, keeping the aesthetic grounded and earthy.

Since construction wrapped in 2015, the abode has welcomed a few new residents: Yessian’s girlfriend, Arielle Stratton, and cats Jean George and Jean Michelle. (Yessian’s rescue feline, Clyde, passed away not long ago.) The enterprising duo—Stratton owns wedding-planning firm Party.Love.Birds and cotton-candy biz Pure Fluff Co.—host regular fêtes from their perch in the clouds. And when they’re not cooking out some 40 feet above King Street, they’re likely jet-setting. Yessian recently got his pilot’s license. Many weekends, he and Stratton cruise above the city in his Cessna 182—and the hobby’s given him an even deeper appreciation of his apartment’s spectacular vistas. “I love the view of the peninsula from a plane,” he says. “And the fact that I get to see some of the same things from my condo—like the sky over the bridge, the sunrise, and all the city lights at night—is pretty exciting.” 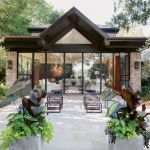 A decade after its first overhaul, a contemporary residence overlooking the Wappoo River gets an indoor-outdoor makeover 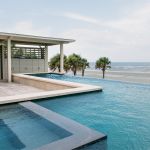 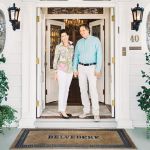