Urban Outfitters
November 2010
WRITER:
Melissa Bigner
PHOTOGRAPHER:
Peter Frank Edwards
Downtown: She’s a textile maven, and he might be the city’s best barista. Us? We’re invited to dig their digs 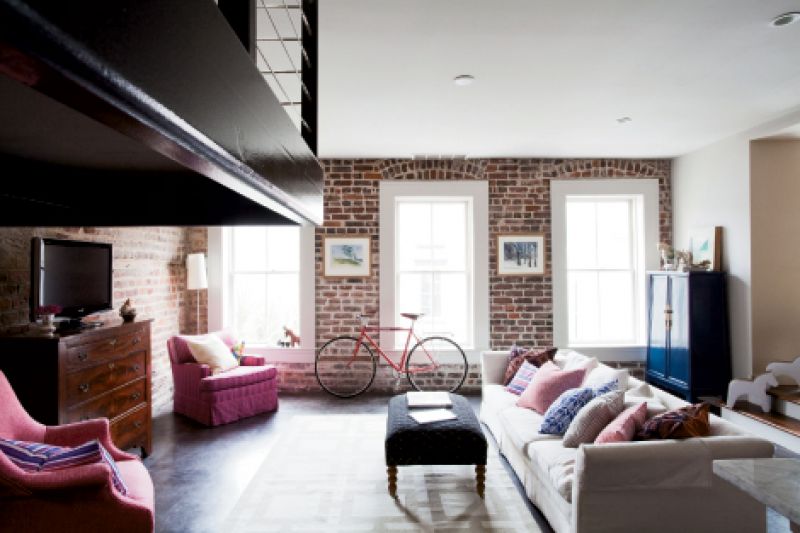 The best adventurers are those who know when to change course. So has it been for the adventuresome husband and wife team Harper Poe and John Vergel de Dios, she the designer-owner of Proud Mary, a collection of fair-trade textile goods made by women in developing countries, and he of the intentionally under-the-radar but oh-so-buzzed-about Hope and Union Coffee Company on St. Philip.

Back to what they do in a moment, but as to how they came to do it here? Turns out the pair—who, between the two of them, have lived in So Cal (his home turf’s the OC), North Carolina (she’s a Charlotte-born gal), Los Angeles, Vail, Brooklyn, and Costa Rica and had stints in Chile, France, and Spain—came to Charleston because it stirred their imaginations and tickled John’s surfing bug.

Here’s how it went down: The couple met in Colorado and married in 2008 at DeBordieu (south of Pawley’s Island), where her parents retired. After their “I dos,” they tripped down to the Holy City, and John surprised Harper by saying he could live here. “He likes being near the water,” says Harper, sitting in their King Street loft while their cat, Squeak, angles for lap time. “And Charleston’s a charming place, especially when you see it for the first time,” she adds.

So after four years spent in Williamsburg, Brooklyn—the longest they’d ever stayed in one spot—John quit his post as creative director for an ad firm, Harper packed up her Proud Mary office, and the two moved just over a year ago to…Wagener Terrace?

Harper laughs and shrugs at the leap, explaining that they figured renting a cottage with a picket fence and backyard studio for John’s office seemed like the “Charleston” thing to do. “I don’t know...we wanted a little house,” she laughs, adding that they’d lived in a 650-square-foot loft in New York, then a two-story home. But three months after moving to Darlington Street, the rains came, the studio flooded, and the palmetto bugs showed up. Like any good adventurers with a thing for design and domestic tranquility, the pair hopped on Craig’s List for salvation.

“This,” she says, “is the perfect transition for us from New York, because living here feels more like we’re in a city. We can walk and ride our bikes everywhere.”
But they did change things up a little on the décor front. “Before, we were living in small spaces—very Japanese, very minimalist,” explains John. That meant that Brooklyn streetside finds paired with Ikea bookshelves that doubled as partition walls in studio-like space. But in the condo?

“We had more space than we had furniture,” says Harper. So like many young couples, they turned homeward, and more or less “raided” the Poe family storage units, she says, grinning. That netted them a host of upholstered chairs, which she plans to cover in Proud Mary fabrics. Then they added choice elements, like the Ikea dining table, which John says they felt a little obligated to buy considering they now have a dining room.

In the end, it’s a real blend: clean lines with perfectly worn hand-me-downs; sleek finishes with artisan woven patterns; pop-flavored Eames and Bertoia chairs with sweetly rustic Lowcountry drawings; an abstract by Helen Rice with sentimental figurines from family; and on. It works because the backdrop is utterly neutral, and too, because, as Harper says, if she likes something enough to buy it, she knows it’ll work. Ah, “knowing”—the gift of having an innate flair for design.

Harper has used her design prowess well. After her company’s 2008 online debut, it appeared on iconic sites like Design*Sponge.com and marthastewart.com. Today, Harper still works with weavers in Guatemala but has added lines from South Africa and even teamed with a tailor on John’s Island. “Cross my fingers, I’ll be showing at the next gift show in New York,” she says.

And John? Though he still tackles some freelance graphic design gigs, he switched gears to open Hope and Union, named for a beguiling intersection in Brooklyn. His goal? Make an oasis for thinkers akin to the first coffee shops of the 1800s. With silent disco parties (headphones required) and a steady stream of laptop-bearing customers, so far so good.

But who knows how long the Holy City will hold their attention? “Opening a coffee shop is a commitment,” says Harper. “But it would be nice to live in California, where John’s family is,” she muses. “Six months here and six there? I guess it’s not impossible.…” And so the adventuring continues.

Get Their Laid-Back Look
Harper’s past lives include working with L.A. interior designer Ruthie Sommers; freelancing in décor for Banana Republic’s New York home office; and tackling celeb houses in the Big Apple—Gerard Butler, anyone? Between her flair and John’s former role as a skate- and surfboard graphic designer, the two have interesting ideas about dressing up a dwelling.

• Mix it up: “I don’t splurge on lots of things, but I know what I like and if I buy it, I know it’ll probably work,” says Harper. A traditional chest next to an Eames rocker and an ethnic fabric donkey? Sounds good to them.
• Embrace the hand-me-down: The pair inherited some furnishings from Harper’s parents and aims to recover the upholstered pieces in Proud Mary fabrics.
• Shop the street: “Much of what we have is from the side of the road in Brooklyn,” says Harper. Here? Scout the streets Sunday night before Monday morning’s trash pickup.
• Don’t be an Ikea snob: Items from GDC (a rug) and Eames elements (a wall rack, pictured at top, and a rocker) mingle well with the Swedish company’s clean-lined, reasonably priced pieces.
• Surf for inspiration: Harper’s blog, lloso.blogspot.com, features design-themed photos and goods she loves from around the world. Check it out along with proudmary.org, and visit John’s airy coffee shop (199 St. Philip St.) for a shot of great interior ideas.