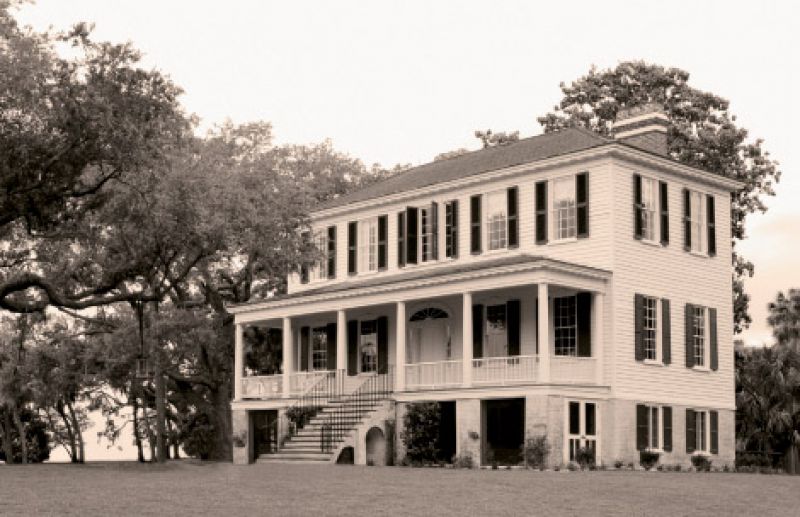 There’s something about Edisto Island’s Prospect Hill Plantation that seems to haunt folks. And it’s not just its ghosts—those few benevolent spirits that reportedly dwell alongside its corporeal residents. No, the haunting is more that way that some places grab hold of one’s imagination and linger in the soul. It’s the kind of thing that makes an island resident (like Phyllis Phillips) self-publish a first novel on its founders and leave the tome on the manor’s doorstep; the kind of thing that makes the property’s caretaker, James Smythe, show off his case of archeological finds from the grounds with no prompting; the kind of thing that makes its current residents amass accordion folders stuffed full of history reports, old records, and grainy photos that document the property. It’s the type of haunting that makes an Old Village couple—Susan Ford and Hank Hofford—leave the ease of urbane living for country life, and sink years into getting the plantation on its feet again. “It’s not about the school district,” says owner Susan Ford as she explains the home’s mystic.

“It’s not about conveniences. It’s not about style. Prospect Hill is really about the land. This house was only here because of the land around it, and as a Sea Island cotton plantation, it’s seen rich times and poor times, it’s had workers on the land, and it’s been through a war. The land, its history, that’s what captures you.”

( above: Previous owners of Prospect Hill, the Whaleys, gave Susan a collection of photos of the home, including this one of happily imbibing residents from the Edwardian era. Note the family parrot in the foreground.)

A tour of its 409 acres proves what she says and shows why the well-heeled Baynard family established a cotton plantation here along the South Edisto in 1792. Today, pass through the property’s gates and you meander by fields, dikes, and tupelo bogs on the mile-long dirt drive that ends atop a waterfront knoll. At Prospect Hill’s inception, the river below served as the equivalent of an aquatic autobahn for its owners, who sold copious amounts of long staple cotton to exporters in big port cities like Charleston. (Caretaker James has found rare lead tags from the old cotton bales on the property, each used to mark and track harvested batches.) In its most productive era, there were some 220 slaves working the plantation, which then totaled upward of 520 acres.

A three-story circa-1800 Federal home—reportedly designed by White House architect James Hoban, though not documented as such—crowns the bluff. When the home passed out of Baynard family hands not long after the Civil War, it went nearly unmodernized (though inhabited) for the next 100-plus years, until it caught the eye of out-of-state developers looking to create a luxury golf getaway on Prospect Hill’s grounds, and throughout the adjoining Riverside Plantation.

That was in the early 1990s, around the same time that Hank and his business partner, Mike Bennett, caught wind of the place and its potential fate. For the next near-decade, the old plantation and surrounding plats underwent legal wrangling between foreign developers, governmental agencies, and the Nature Conservancy, which eventually led to Susan and Hank securing an option to buy it in 1999 from the latter. The only stipulation? The couple—he a builder, she a veteran of several old-home restorations—were bound by law to develop it gingerly and in limited fashion, with the property placed under a perpetual easement. Though the two approached Prospect Hill as a business investment and preservation project, the home—overgrown as it was with brambles, void as it was of central air, electricity, and plumbing, and bedraggled as it was overall—so captured their imagination (Susan’s especially) that she and Hank ditched their initial plans and moved in permanently as its sole private residents in 2009.

To get the house ready for full-time habitation, they enlisted a Palmetto State dream team of sorts: Glenn Keyes, an architectural icon who modernizes historic homes while preserving their integrity and identity; Reggie Gibson, who adds contemporary, yet organic, whimsy to utilitarian structures (think Fleet Landing restaurant and the Ashley River Bridge clock tower); Sheila Wertimer, whose landscape work is putting her on par with the famed Loutrel Briggs; and P.O. Mead IV, who is widely assumed to be the state’s best arborist. Glenn assessed the building’s structural needs and outlined a step-by-step prescription for good house health, longevity, and livability. Reggie drew up plans for outlying buildings and designed copper structures for wells that call to mind I.M. Pei’s Louvre glass pyramids for their juxtaposition with the manor’s classical architecture. Sheila surmised the location of the original drive, plotted its offspring along with other walkways, new groves, a garden, an orangery, water elements, and more. And P.O., he went tree by tree, doctoring each back to vibrancy once more.

“We really had less crews and more craftsmen out here working on the place,” admits Susan, who easily lists those who pitched in, name by name. There was Max Tarpley, who helped her replace and mend doors, jambs, and sills, then strip away old paint bit by bit. There was muralist and painter Stephanie Poe who did the faux bois doors and marbleizing on the mantel. And there was pal Kathryn McGowan, an interior designer who helped Susan dress the place in antiques that suited a light-flooded manse graced with 11-foot-ceilings, a regal parlor and dining room, and an expansive master bedroom and guest room, not to mention the modern quarters Glenn created on the ground floor.

But before Susan’s artisans could pitch in, she and Hank’s extended family did. One Easter found sisters and brothers and young nieces and nephews camping on the plantation grounds while Susan and Hank slept on mattresses on the floor inside. (That was in part because the house was such a work in progress, and in part because relatives caught wind of ghost rumors.) All ages got to work tearing up overgrown brush about the house, removing wasps nests inside, and the like. When they wrapped for the day, Susan put on an egg hunt that featured plastic eggs filled with coins—plus one or two stuffed with $50—to reward the kids.

Today, following what Hank calls the completion of their “toothpick renovation” (dubbed so because every millimeter was hand-coaxed back to life), Prospect Hill has become a home again, one that, once more, nobly adorns the land upon which it sits. His and Susan’s younger daughter married under the old oak by the river last summer and their eldest daughter is set to follow suit this year. The house is regularly opened for Edisto Island Historic Preservation Society’s tour of homes, and the couple is known to welcome the occasional benefit there as well. For the past decade, Thanksgiving meant oyster roasts for scores on the grounds. These days, guests can actually come inside in between shucking.

On regular days though, it’s much quieter. Caretaker James (a scant 26 years old) breezes in with his hunting dog, ready to talk about his latest unearthed find. In the den, Susan’s Boykin, appropriately named Baynard, stands by his mistress, who is studying a handful of wild mushrooms she’s found nearby over the past few days.

“Living here,” she says, “is about all of this. It’s about what’s been here, what’s here now. It’s about the eagle that passes by outside, it’s about this house and its light, and even these mushrooms here.” Haunting, apparently, the lot of it.