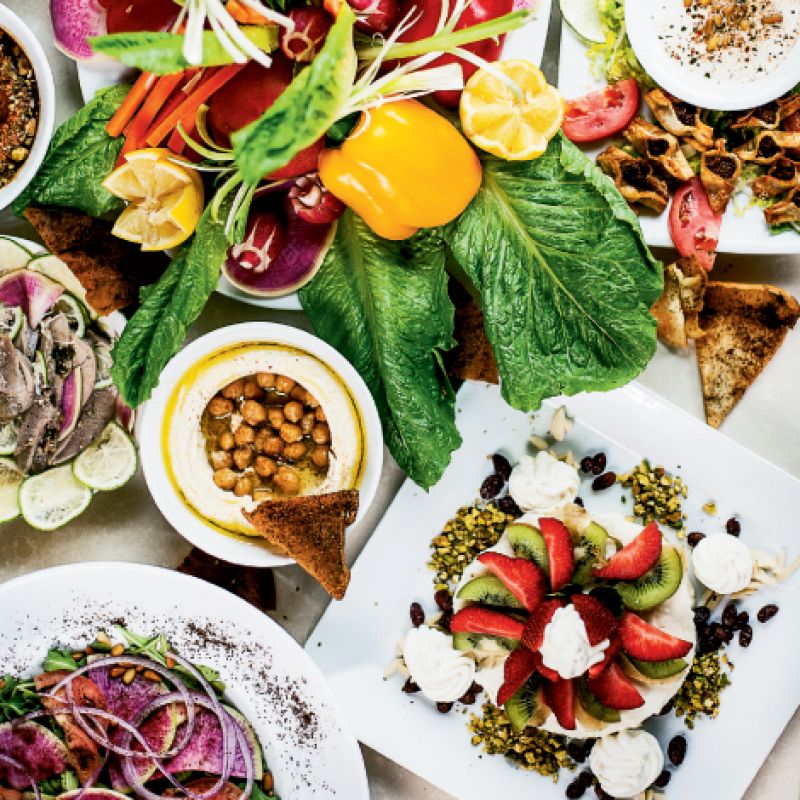 It’s hard not to fall for Leyla, such an intriguing place—exotic, flavorful, and warm. Her spangled appearance from the front door belies a naïve simplicity. She’s seductive, but out of place. She’s charming, but unadorned.  She might turn heads amongst ethnic eateries along Dorchester Road, but in the swank midsection of downtown King Street, she’s a schizophrenic date, too expensive to be called casual yet awkward and often bumbling. Still, you want her to win your heart.

Leyla plies it with yogurt, which she calls “labneh” because she’s Lebanese. I like the version topped with sujuk, a spicy Armenian sausage, but if you take a look at the menu before you go—almost a hundred different listed preparations make it worth your while—you find the labneh overflowing, made fresh. Co-owner Dolly Awkar insists she’s working towards a local source of goat milk. Wouldn’t that be divine?

What once housed the beloved Sushi Hiro is mostly gutted, transformed, but refitted with the necessary details to be called a functional restaurant. You can sit at the well-appointed bar and watch the city walk by through the plate glass, but it’s tight quarters; a dozen mezza (small plates) amongst three or four requires quite a bit of room. Awkar, who runs the place and keeps a hawk’s eye on the door, usually ambles over for a greeting regardless of your seat. She’s attentive and caring in a way that the college-aged waitresses are not; sometimes they make you wait.

Two months ago, chef Vatche Meguerditchian left in a tizzy. He took off back to Los Angeles to nurture a singing career. Or perhaps he will rejoin Alcazar, where he once got a mention from the Pulitzer Prize-winning Jonathan Gold. Alcazar is now a catering company serving the greater L.A. metro with an expansive Lebanese menu, and Leyla’s slate looks strikingly similar.

Perhaps Awkar got the better end of that deal. Food from the remaining chef, Bachir Matar, shows little decline in quality or execution. The hummus comes as smooth as ever, warm and slathered in a spry bit of olive oil. The muhammara, a rough paste of walnuts and red peppers dressed in pomegranate molasses, still makes a lovely addition to spoonfuls of garlicky labneh spooned onto warm bites of pita. The manteh—warm, crunchy, handmade dumplings filled with a spiced beef paste—make for a perfect afternoon plate alongside the black licorice wafting from a small tumbler of arak, a Levantine spirit made from anis, clouded with cold.

Leyla’s most interesting foods tend to surround the unfamiliar. You might not be a turnip fan or routinely pine for them pink and pickled and served with bitter brined green olives. Frog legs swimming in an acidic bath of lemon juice may leave you squeamish. But embracing the unusual pays dividends. The most delicious bites here are the ones you’ve never really heard of. Ask for the lamb tongues served cold and swathed in lemon.

If you’re ravenous, Leyla will seduce you with shawarma, a feature on numerous plates.  Thin shavings of spiced beef from a vertical roasting spit (think Greek gyro) are piled high upon the plate and spirited warm and steamy to the table, assuming your waitress doesn’t dawdle. One weaves one’s way through nibbles of the beef, maybe wrapped up in a wedge of pita, napped with accompanying tahini sauce, perhaps paired with one of the complimentary turnip pickles or a bit of muhammara spooned over.  Leyla’s mezza are mostly interchangeable, and with a modest selection and a couple of friends, the permutations mix and match.

It’s hard to know how Leyla will fare. She’s an intriguing soul, full of spice and with enough grit to qualify as real. Perhaps she needs to dress it up a bit, adorn her walls with artistry befitting the food or partition her space with flowers and secluded booths for romance. Maybe the lights should dim, and she can invite us with the feel of new white linens rather than hard deli granite. The servers may learn to pace the meal and to attend the customer. No matter, I’ll still steal away to see her, furtively, after dinner for a bitter Lebanese coffee and rich, creamy ashta b asal—fresh cream topped with pistachio, honey, and almond. Or to take in the beautiful meghli—warm rice pudding spiked with cinnamon, cloves, caraway, coconut, walnuts, and pistachios. With sweets like that, even if she’s sometimes a beautiful mess, Leyla commands my attention.

The Draw: The best (and only) authentic Lebanese downtown
The Drawback:The high price doesn’t always match the level of service.
Don’t Miss: The handmade manteh
Price: $6-$39