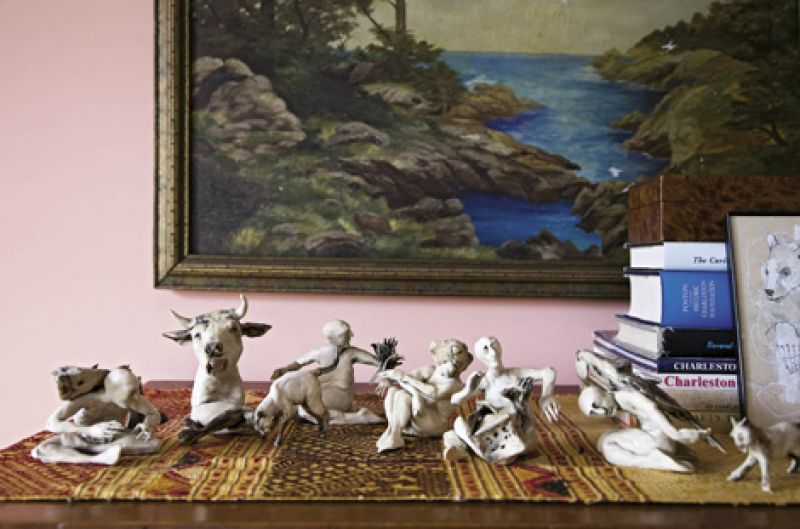 Life imitates art, as the saying goes. But what of the reverse, where art—or the collection of it—chronicles a life, like a well-preserved journal with plum pieces serving as abstract entries? Take the varied collection of Terry Fox, an affable player among the city’s highly visible arts scene: his Headquarters
Island condo is filled with works culled from here and there (Charleston to Machu Picchu, Paris to Cairo) and from local artist friends old and new. And each comes complete with spirited narratives that speak volumes of the collector’s own sensibilities—not to mention his wit.

“That’s a chicken’s leg and foot,” Fox explains simply, beer in one hand and the other pointing to an Aggie Zed painting hanging above the mantel. The phrase, “Novoodoo just upide,” runs below the image. “I love that play on the good old Southern word uppity,” he adds with a brand of enthusiasm that tells you he really does get a kick out of it. As for the interjection of the word voodoo and its close association with the chicken leg? “Who knows what that’s about,” Fox laughs.

Indeed, the Hudson, North Carolina, native has never claimed to be an authority on art (“though I am a connoisseur,” he says, bringing in his familiar tongue-in-cheek commentary). “There wasn’t a lot of artistic stimulation in Hudson, but growing up, I can’t recall a time when I wasn’t drawing or painting,” he says, noting that his parents fostered his interest over the years with lessons in various mediums. Then came art history classes at UNC Chapel Hill, where he attended college. “I had enough credits for a minor in art history, but for whatever reason, I never declared it,” he explains.

Judging from his current post as director of Career and Student Services at The Art Institute of Charleston and his spot on the advisory board for the Halsey Institute of Contemporary Art, it seems he’s intent on cultivating those same interests in the younger set. Fox was also involved in establishing Pecha Kucha Charleston (translated “the sound of conversation”), a local forum that is part open-mic night, part show-and-tell, and part happy hour. “This is a volunteer effort by various organizations, businesses, and academic institutions to engender dialogue and demonstrate the economic value of arts in the community,” explains Fox.

At home, though, it’s back to an art collection that is, by his admission, quite dark. “There’s nothing light or pretty about it,” he admits, noting that the pieces he collects tend to mirror the deep, almost Gothic writings of Southern author Flannery O’Connor. “I feel they closely relate to her view of the world. There’s a depth and mystery involved with this art—you have to spend time with a piece to understand what’s really going on.” As if occurring to him for the first time, he adds, “Skulls seem to make frequent appearances in my collection—I swear that wasn’t intentional, and it’s not a morbid thing. They just seem to work with the dark edge of everything else.”

Relationships among images or forms are of no small significance, particularly in a modern condo that’s roughly 2,000 square feet—quite a contrast to his former residence in Harleston Village, an 1854 Italianate duplex complete with 12-foot ceilings and ornate plaster ornamentation.“When it came to making it all work as well here, I really let the pieces find their own way. I relied heavily on color and texture, and of course, scale.”

Starting with a large triptych by Atlanta artist and friend Elyse Defoor that would only fit along the top of the stairwell, Fox built his gallery from there, placing more than a half-dozen works by Charleston native Kevin Taylor (a favorite for his macabre figures and unconventional canvases, like a metal folding chair and a whiskey flask), local ceramicist Nina Liu, and Zed, another Charleston native who lives and works in Gordonsville, Virginia. “I have developed close personal relationships with many of these artists—nearly everything has a story,” he explains.

Case in point: Defoor’s series of abstract renderings of garter belts. “Elyse is a dear friend of mine, and she painted these pieces during a very difficult time in her life,” says Fox.“They hung in her house in Atlanta for some time, but I always told her, ‘If there’s ever a time you’re ready to part with them, let me know.’ Eventually she was, and I bought them from her.” Pointing out a canvas on the far wall of the dining room, he adds, “That piece is by John Jacobsmeyer. He lived here for a time as an associate art professor at the College of Charleston and sold me that painting shortly before moving away.” Ominously titled Death of Reginald, the work depicts an apparently mourning, and rather androgynous, human figure. Hidden in the foliage just behind the figure’s right side is a freshly speared bull. Fox explains simply: “John grew up on a cattle farm, so cows in various configurations were, for a time, a recurring theme in his artwork.”

Lacking the dark overtures Fox often seeks is a walnut console by pal and local furniture maker Michael James Moran.“Mike and I got together and concluded this was the only place a piece of his would fit, so he and I collaborated on the design,” Fox explains.

And then there’s the realist landscape of a presumably Northeastern bay painted by his schoolteacher aunt years ago. “This was likely done from a postcard, as I can’t imagine that she traveled that far afield. That’s probably how she taught herself to paint.” Tucked into the upstairs study is a Nathan Durfee oil painting hanging below a weathered metal sign. Rusted from years of service outside Fox’s father’s business, the sign reads “City Barber Shop.”

“It’s old and worn but, like the other pieces, it represents an era in my life,” Fox says. “There’s a deeply personal meaning to everything here—each a reminder of a relationship, an artist, a conversation I had when I found it. My history with each of these pieces is what links them all together.”

Like Terry’s style?
Here’s a who’s who directory of his featured artists