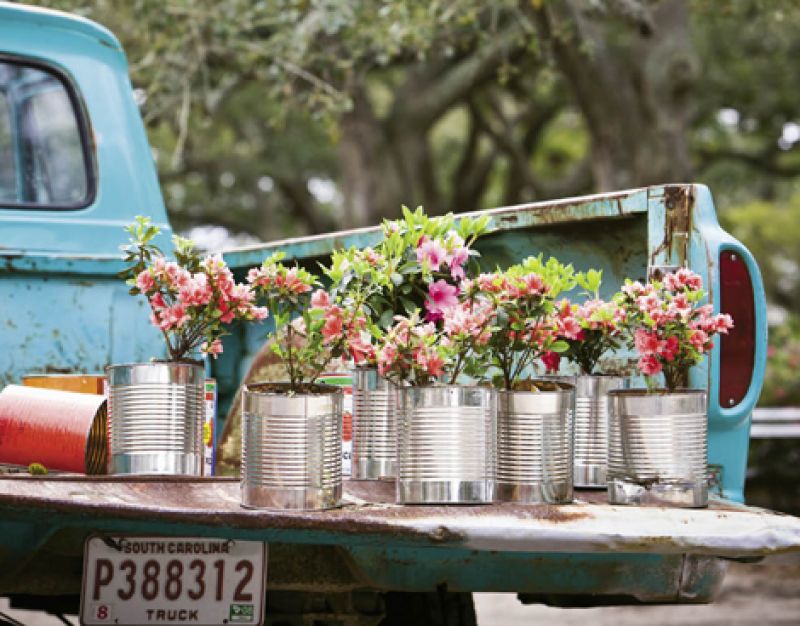 Just over a year ago, I got one of those calls from a book publisher that writer-stylists like me dream of: What sort of book did I want to do? I went jogging through my neighborhood to rattle creativity into clear thinking and headed over to Hampton Park. Along the way, I passed myriad derelict homes, divine old dames falling in on themselves no matter the garden party that continued at their crumbling feet. There, naked ladies danced, wisteria sighed, snowflakes ducked their heads demurely, and the flower power parade marched on.

At the park proper, camellias wept a little at having to make way for the oncoming profusion of azaleas. Cherry blossoms grinned, forsythia bobbed in flashes of egg-yolk yellow, and loropetalum tassles shivered in the cool breeze. Wandering our urban Eden, I got to thinking how I’ve never been to my mom’s Chalmers Street house without some bloom, leaf, branch, or frond spilling out of a vessel. How today our windowsills, piazzas, courtyards, and even right-of-ways become gardens.

Thus Southern Bouquets came to be. Its premise: simple, homegrown bouquets fashioned solely from the bounty of Lowcountry backyards. Because we skipped florist coolers altogether, we made fast friends with the folks who nurture flowers in local landscapes—from plantations to parks to farms to private gardens—and collected their “babies,” with permission, of course. The end result was a lucky year spent basking in Charleston’s earthborn masterpieces. Here are some of the images and stories from our adventure. We hope they inspire your own backyard gathering and bouquet making. 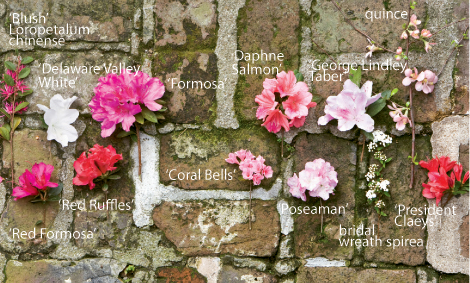 At first signal of spring’s trumpet-shaped flowers, the Lowcountry rejoices a new season

When warm weather makes its annual reappearance in the Lowcountry, azalea blooms blanket Magnolia Plantation and Gardens like a layer of colorful confetti tossed every which way by spring breezes. It’s been like that since the mid-1800s, when owner John Grimké Drayton inherited the enormous spread of rice fields and formal gardens and, sick with tuberculosis, turned to tending the earth for therapy. Today, Drayton’s credited with introducing a variety of Southern stalwarts to the region’s—and country’s—landscapes, among them the first ‘Southern Indica’ hybrid azaleas.

One April day, Tom Johnson, director of the gardens, gave me the green light to wander, clippers in hand, through the colorful scene. As I poked about the shrubs, I kept telling tourists I had permission, because so many of them looked ready to tackle me for disturbing the historic floral shrine. Examining the blooms closely, I’d never seen such variety: doubles, frilly edges, tiny cups, and on, in colors from blush pink to a rich salmon that I’d never witnessed before or since.

Due to a surprisingly hot afternoon, I nearly lost my harvest, as azalea petals are more delicate than tissue paper and my buckets were low on water. Thanks to a cool, dark room and fresh, cold water, Heather, the floral stylist, salvaged them. I promised her the next time I gather the short-lived blooms, I’d cut them the day of their decorating debut and pamper them properly on the way to their vases. 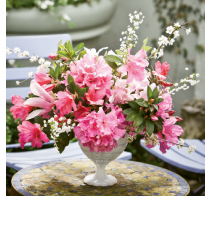 A milk-glass vessel spilling over with ‘Formosa’ azaleas dresses up a courtyard table. Simply fill a vase with damp floral foam and form a domed silhouette with azalea blooms and greens. Then insert tulip tree magnolia blooms and bridal wreath spirea. Their cooler colors and calming greens break up the hot-toned bouquet.

TIP: Morning is the perfect time for gathering any flowers, especially the typically short-lived cut azalea. (Expect azalea blooms to remain fresh only up to a half-day after cutting.) 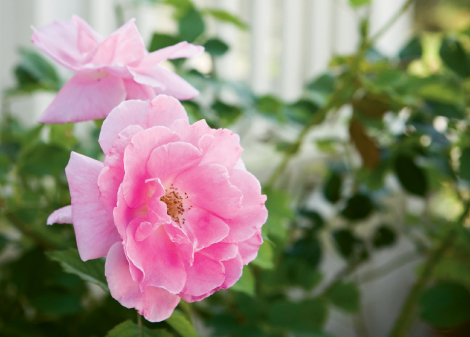 From the 19th-century Noisette rose to the modern Heritage Rose Trail, these blooms are scented with local history

Local rose enthusiasts can trace the bloom’s Lowcountry history back to the 1800s, when Ashley River planter John Champneys and his neighbor, botanist Philippe Noisette, cultivated what became known as the Noisette rose. A sensation when shipped abroad, its scent, frilly look, and hardy nature won over gardeners worldwide.

Today, Charleston claims one of the most renowned Noisette experts, Ruth Knopf—a self-taught rosarian who helped reintroduce old roses back to the area, as many had faded out of existence back in the 1930s. Spurred by the International Heritage Rose Conference being scheduled here in 2001, she and others began planting Noisette, tea, and China roses in the 1980s and ’90s in area parks, churchyards, and historic home gardens (like those at the Nathaniel Russell House and Boone Hall Plantation) with clippings donated from gardeners nationwide. By the time the conference opened, the Heritage Rose Trail—a loose compilation of old-rose garden sites—had been established throughout the peninsula and beyond. These days, a sizeable collection of Noisettes still thrives at Hampton Park, and the old-rose garden Ruth plotted for Boone Hall Plantation remains a glory.

Kathy Woolsey is another area gem involved with the Heritage Rose Trail. You’ll find her leading classes in rose care and propagation at Cypress Gardens, where she’s a horticulturist. We met up with her at The Charleston Lowcountry Rose Society’s annual show at Northwoods Mall in North Charleston, where she gave us buckets of privately grown hybrids that never made it to the judging floor. The show’s modern castoffs and the scores of tenderly cut heirloom roses donated by Ruth, her pal Jane Waring, and city horticulturist JoAnn Breland let the past and present mingle in a magical way. 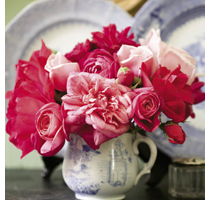 Buds and blossoms mix it up

A blend of hybrid tea roses and old-fashioned sweet pea offer a summery burst of color. A tiny creamer plays host to a single, apricot-colored 1904 ‘Crepescule.' 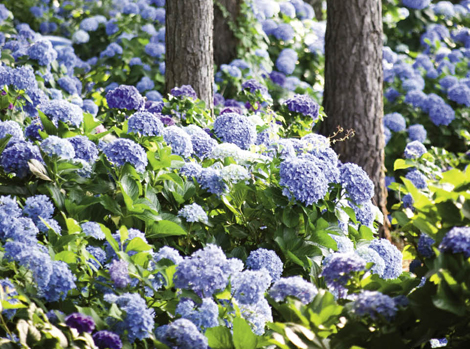 Summer sings into fall when these abundant blossoms appear in cool, shady spots

Two summers ago, I slipped into the auditorium at The Charleston Museum where the Charleston Horticultural Society was hosting one of the country’s top hydrangea experts—Judith King. The place was packed to the rafters, and I just so happened to sit by a charmer who, it later came to light, is a well-respected, genial gardener known for her little Eden in Ansonborough.

I learned that hydrangeas have been in the area since the 1800s, from some locals who note that the moisture and shade from shoulder-to-shoulder houses help the plants thrive. As Judith explained the different classifications to the group—‘Annabelle,’ lacecap, mophead, oakleaf, and peegee—my neighbor, like everyone around her, whispered when “her” hydrangeas popped up on the screen.

Afterward, I made my way up to the stage to get some help identifying the blooms we had gathered from abandoned lots, and there were Louise Bennett and Sidi Limehouse, owners of John’s Island’s Rosebank Farms. The part petting zoo, part cut-flower farm, part produce stand just before Kiawah is one of the best places to see mounds and mounds of hydrangea bushes.

They have some 3,000 plants—the earliest one rooted from Sidi’s grandmother’s place on the island—spread over several acres. As Louise and Sidi discussed their “babies” with Judith, I realized that a garden club really is a fan club and that Sidi, who’s grown the blooms since childhood, is something of a rock star, being one of the most green-thumbed growers in the Southeast. I’ll admit it’s a little groupie-like, but there’s no way I am missing Rosebank’s June Hydrangea Festival now. 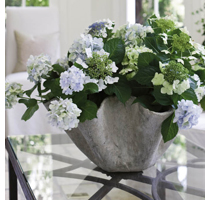 TIP: A watertight plastic grocery or zip-top freezer bag can convert nearly anything—like this metal container (above)—into a “vase.” Line the container with the bag, add water, then flowers, and conceal the bag with blooms.
TIP: Make dark flowers, like ‘Ayesha,’ with its tiny cupped petals, pop in brightly colored containers (top).
TIP: Weight diminutive vessels like a bud vase with a few clean pebbles before adding water or top-heavy blooms. 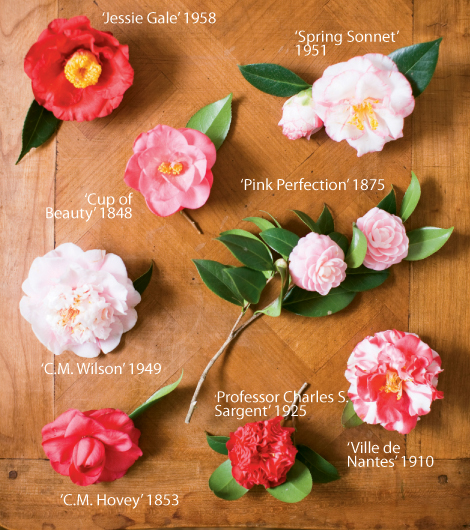 Charleston claims an abundant floral history, especially regarding camellias. It’s widely believed the flowering shrubs first thrived outdoors here in colonial America. That’s when, in 1786, famed botanist André Michaux gifted a camellia grown in his Goose Creek garden to friends at Middleton Place Plantation. To this day, the same variety—‘Reine des Fleurs’—grows there amid some 2,000 camellia bushes. And there’s still a little bit of an old-school rivalry with nearby Magnolia Plantation concerning who’s king of the camellia hill. In the mid-1800s, John Grimké Drayton didn’t just plant azaleas; he went camellia crazy, and today there are reportedly more than 6,000 specimens on the grounds.

Outside my friend Caroline Ilderton’s office near the Mount Pleasant Farmers Market, a single lush japonica bush fills her southerly window with glorious blooms and glossy leaves. As we admired it one day, she shared the story about when her mother, Eleanor, left Charleston for North Carolina in the 1940s, she was the first of her family—the Condons—to do so in several generations. Eleanor had grown up visiting her aunt at John’s Island’s Fenwick Hall, back then a rural plantation famed for its near-forest of camellias. When Aunt Nellie learned the young newlywed was hosting a garden party in a Tarheel yard nearly void of flowers, she got busy.

Caroline explained that her great aunt and grandmother gathered the best of Fenwick’s camellia heads and buds, filled a Condon’s dress box with dampened Spanish moss, cut potatoes in half, rooted the flower stems in them, and literally sewed the potatoes to the interior box base. They covered the mass of camellias with wax paper, then bought the box a bus ticket to Greensboro, where Eleanor waited, knowing only that a surprise was on the way.

The blooms, Caroline said, arrived safe and sound. Apparently they were the hit of the Garden Makers party, as only a housewarming gift from a Charleston garden can be. 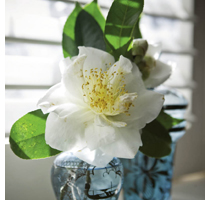 Bring your blooms indoors for a pop of enlivening color

TIP: Place flowers in sunlight to coax open buds or in shade to preserve petals. Float short-stemmed (or fading) blooms to extend their lives. Add a few drops of bleach or commercial floral preservative to water.