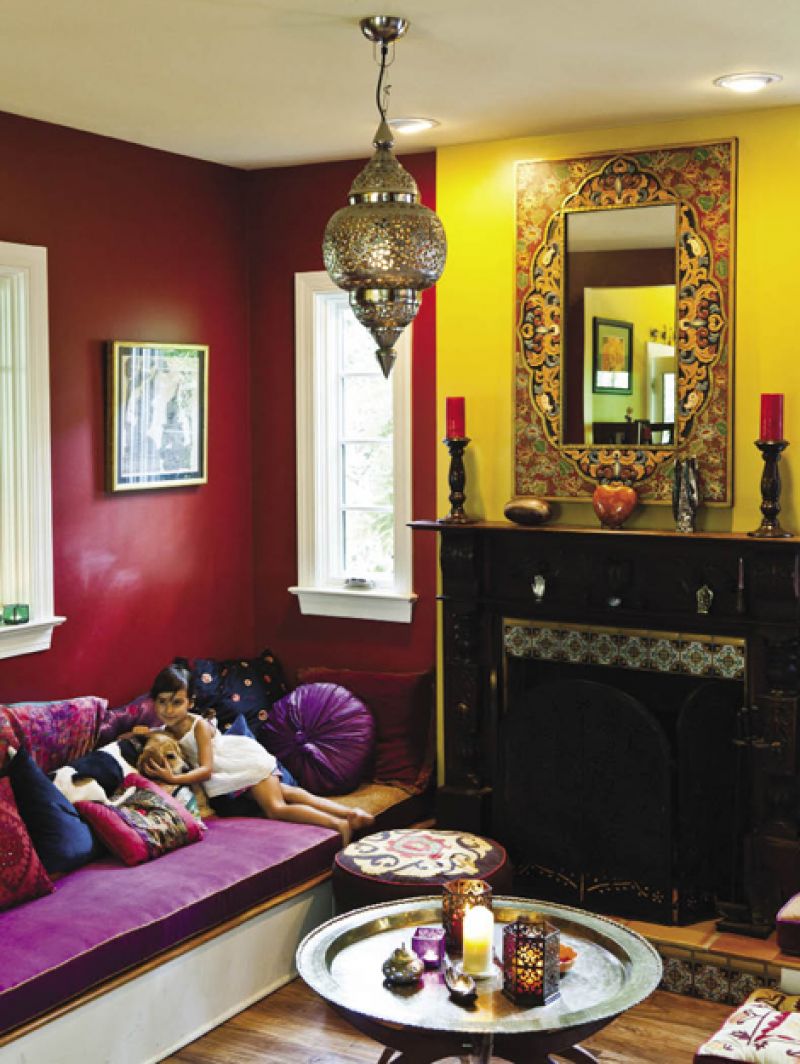 On a corner lot in Riverland Terrace on James Island, there's a colorful revolution taking place. In this demure neighborhood where cottages in quaint, neutral palettes tend to quietly fan themselves under the area's fabled canopy of oaks, the King family residence is a standout.

From the street, the two-story brick and shingled home merely hints at the action within; red-trimmed windows wink at passersby, a bit of red tin roof catches your eye, and an Arts and Crafts-style front door charms. But score an easy invite in with the affable owners, or sneak a peek around back, and things turn righteously mod fast. First, there's the addition that cantilevers out and sports a collage of corrugated metal, wood, HardiePlank, and stucco. Then there's the purple fence on that side, too, that follows a winding bit of earth where folk art and fountains sprout about the feet of an enormous oak. Husband and wife Brian and Liz laugh when the house is compared to a mullet--business in the front, party in the back. "It's exactly like that!" Liz exclaims.

And that combo fits the pair, she from Los Angeles and he from Memphis, Tennessee. Brian runs The Pet Vet on Shem Creek while Liz raises their daughters Bella, nine, and Francesca Rose (Frankie), five, though they're more widely known as "massive entertainers," Liz laughs, most notably throwing an annual Halloween bash open to one and all.

As they relay the story of the house, Ruby the beagle jumps up on the kitchen's banquet nook that’s part of the addition; Flora the kitty (aka, Swiffer) inadvertently dusts the floor thanks to her bandaged, lame leg; and daughters Bella and Frankie rush in to ask for chocolate and impart newly made beaded necklaces. Even without a slew of guests, the home is hopping and as social as it gets.

"Our first house was in Mount Pleasant and smaller, says Brian. "We started looking for a neighborhood with a good mix of people, and friends told us to look over here. But they also warned that we'd have to be lucky, because it's the kind of place where hardly anyone ever moves out."

The draw? The 1940s neighborhood, one of the oldest on James Island, consists of some 800 homes, sits on the riverfront grounds of the old Wappoo Hall Plantation, and boasts an avenue of oaks--73 total--that are 100-plus years old. Since Riverland Terrace is less than 10 minutes from downtown and has that mix of ages and backgrounds that the Kings craved, it was primo real estate.

So when a house--which Brian says was a one-time school that had been made over several times by a handful of families over the past century--came on the market, they snatched it up, imperfections and all.

"There were so many entrances, if you had to deliver a pizza, you wouldn't know where to knock," says Brian. Plus, engineers cautioned that oddball pre-existing add-ons and shore-ups--none of which made mathematical sense--needed to be undone, and there were too-narrow doorways and upstairs AC problems to add to the mix. "Once I drove under the avenue of oaks though, that was it," explains Brian. "Nothing else mattered."

They bought the place in December 1999 and moved in. By 2002, they'd had their first daughter, Bella, and Liz's mother had an interesting proposition. She wanted to see her new granddaughter more, but also wanted better sleeping quarters and to cook in a less cramped kitchen. She asked her daughter if she'd be interested in getting some inheritance early so she could put it toward a renovation. The answer was, "Heck yes!" and what started as a small remodel ended up a major overhaul.

Working with architect Kevan Hoertdoerfer, they opened the kitchen and stretched it out into the back garden to allow for a spacious breakfast nook that can seat up to 10; created a flow pattern with solitary front and back doors, a living room and sunken "Moroccan" room for sprawling on pillows around a fireplace; moved the stairwell to the kitchen side of the house and the master bedroom down the hall from the two kids' rooms; and swanked out the mother-in-law suite complete with AC and a sweet bathroom.

And then there was a little help from their friends: Funda Clark helped choose the fabric and upholstered the banquet seats; Shannon Horning designed and built the cabinets; Jamie Beck did the wrought-iron stairs and elaborate garage doors; Liz's Monday night girls' group came over to sew the Moroccan room's pillows; her stepfather crafted the glass bath tiles in the guest suite; Bobby Sargent laid out the landscape plan; and Jeff Tant with Full Circle Garden & Landscapes helps Liz maintain it, in true green fashion, with all-organic, nontoxic, no-pesticides, and solar-generated equipment. Oh, and in the master bedroom upstairs? Brian contributed his rock collection to their bathroom counter, which is basically a glass topper that sits on a bed of stones.

"We wanted a house with energy," Liz continues, "and we got one. If I were to say what the genre is, it's modern bohemian with a serious dose of folk. We love folk art."

A simple walkabout proves the point: a Walter Anderson watercolor, a canvas by a local graffiti artist, and a wall of funkily framed mirrors populate the first floor alone. The girls get in on the touring and with grand sweeping gestures, show how a basin downstairs lights up, how their own bathroom is covered in round scaly tiles that shimmer like a mermaid, and how Frankie’s bunk beds are like a clubhouse. "And look at the view," says Bella, looking to the street and its oaks.

To the left, there's a neighboring house that seems to have caught the colorful King bug. Apparently the artist there was inspired to enliven her exterior in bold playroom colors, too. "In this neighborhood, there's usually beige, light pink, white, and that's it," says Liz. "But now, every neighbor who comes by says they love it and want to try it." And so a revolution begins.