Coda del Pesce
December 2013
WRITER:
Jeff Allen
PHOTOGRAPHER:
Christopher Shane
You could spend a week out on the open ocean, braving the tempest with Mark Marhefka on his local fishing boat, Amy Marie, and your calloused hands wouldn’t reveal the secrets of Coda del Pesce. 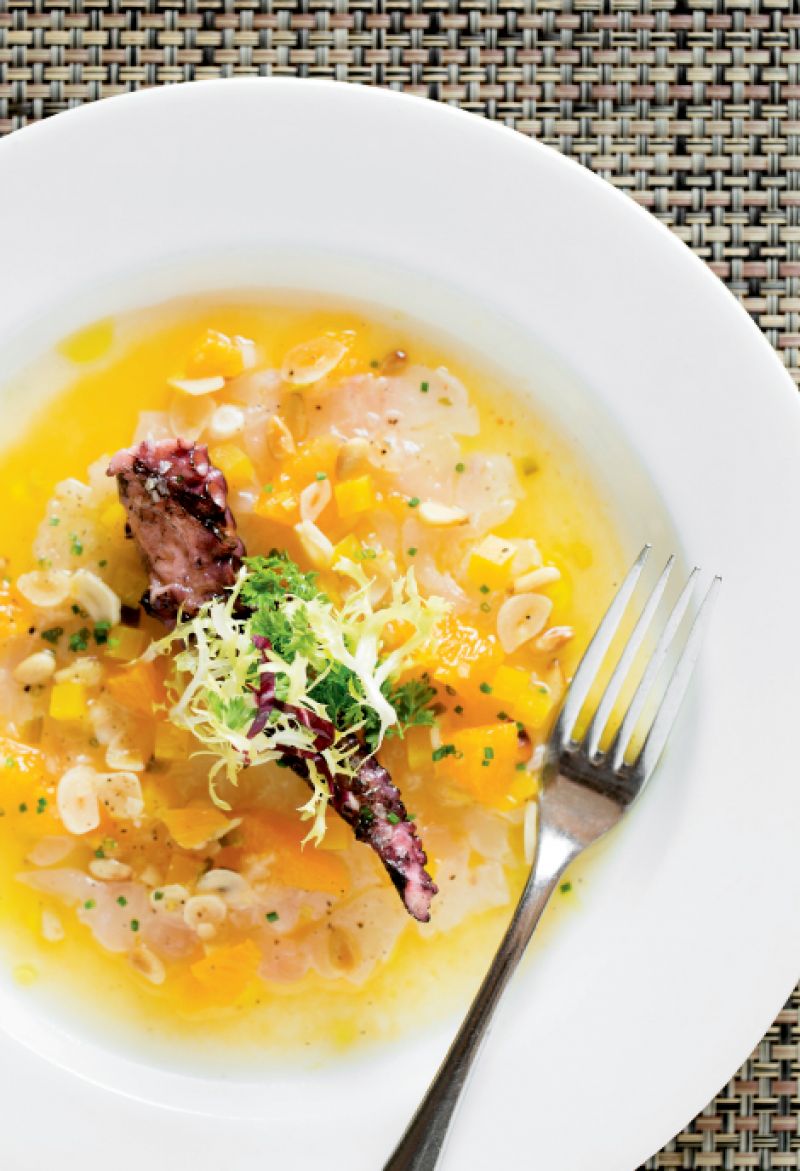 You could travel to the shores of the Adriatic, lying for days in the salty sun sipping sprite wines and searching for the essence of Italian cuisine, sauntering through villages to sample curls of gramigna, angles of maltagliati, twisted strozzapreti or trofiette, and a hundred more indigenous pastas. You still wouldn’t know Coda del Pesce. That story belongs to Ken Vedrinksi.

His is a fish tale. After conquering the inland trattoria at Lucca, he set his course for the open ocean. And like he does as at Lucca, he often stands at the kitchen pass that demarks the entrance to the reclusive upstairs nook, which showcases a beautiful beach view beyond. The entire rear wall of Coda del Pesce consists of little more than plate glass, and if the weather permits, the outdoor patio, perched high above the guitar player stationed at Snapper Jack’s, provides a welcome ambience and an ideal spot for digging into a selection of fried octopus tentacles, squid, and other creatures of the deep. Inside there are tables with the same gorgeous view and an ample bar usually decked with a smattering of locals.

It may be a simple seaside restaurant, an inviting cave of roughhewn brick and bright wood, an alluring outdoor deck framed in contemporary architectural detail, but it’s also an epiphany of pasta, an absolute testament to a man’s search for his family’s homeland, and an expression of that culture through the lens of what comes fresh from local boats. By the time you crunch into a yellowfin tuna arancini, spiked with local radishes, chilies, and fennel, the talent of Vedrinski—and his singular ability to deliver great Italian seafood—will scorch your tongue. And you will be glad.

“We haven’t gotten many crabs all season,” Vedrinski explained sheepishly one night. I assume, when we’d called him over, he was expecting to haggle over a vintage wine; the reserve list is negotiable, and Vedrinski bargains with you personally. But the concern was crab, or the scarcity of it, which was assuaged by “I have a wonderful flounder I want you to try.” To be fair, Vedrinski’s been an acquaintance for years. My presence is never a secret, but I observe the same demeanor towards all of his guests, as I’ve observed in all of his previous establishments.

It’s no surprise that the calamari Bolognese has half the table grinning in delight if for no reason other than the marvel of genius that makes spaghetti sauce out of ground squid. That it’s utterly delicious seems an expectation in a Vedrinski establishment. That it’s surprisingly creative is the trick that delights the crowd.

So it goes with the tagliolini, a bright nest of skinny noodles that gently warms a trefoil of raw tuna, cubed crudo that would be rather bland without the seasoned pungency of salted anchovies, garlic, and lemon nestled below. It comes together as one twirls the fork, a dish of moments and good fortune. And there are pappardelle, broad and fat as a grandma’s thumb, slathered in brown butter and a warm egg yolk that someone just pierced with the tines of a fork. It runs amongst the oyster mushrooms and cured speck weaving their way beneath the salty tang of pecorino. We devour the plates greedily.

The secondi meet the same fate. They are no less substantial than the large bowls of handmade pasta. Swordfish picatta, “Torcino style,” graced with a spritz of herbs and lightly seared, come casually with a late summer tomato concasse that barely needs the heat of the pan. A wahoo loin appears clothed in pancetta, tightly wrapped and browned in oil, plated atop melting cannellini beans spiked with a chicken jus and shellfish stufato. There are other dishes not on the menu, secrets that you must ask the chef to reveal. All can barely survive the initial clash of forks. We become a mad table of pescavores, with sharp blades and ravenous intent.

Vedrinski spends several nights a week perched at the kitchen helm working with chef de cuisine Rhett Elliot, smiling, and surveying the dozen tables that dance among these dishes of the sea. If there is a falter, he attends.  A dropped fork reaches his hands before the waiter’s. A patron’s request for wine receives his suggestion from across the room.The kitchen calls through the window, and he gives instruction and advice. He is not a chef with his name upon a restaurant; he is a cook who runs a restaurant, and he does so to the satisfaction of his diners.

If that requires an extra spoon of gelato for a young girl’s dessert, then it’s done. If it means an impromptu conversation outside over a glass of grappa, he obliges with tall tales and bravado. His story may be a tale of fish, but it’s not the end of Ken Vedrinski’s classic epic. He’s a chef with much more ahead than behind, if only because he understands what it means to serve great food.

THE DRAW: An experience as close to the Italian seashore as you’ll discover this side of the Atlantic
THE DRAWBACK: Those with seafood or shellfish allergies may find options limited.
DON'T MISS: The finest house made pastas outside of New York City
PRICE: $9-$28