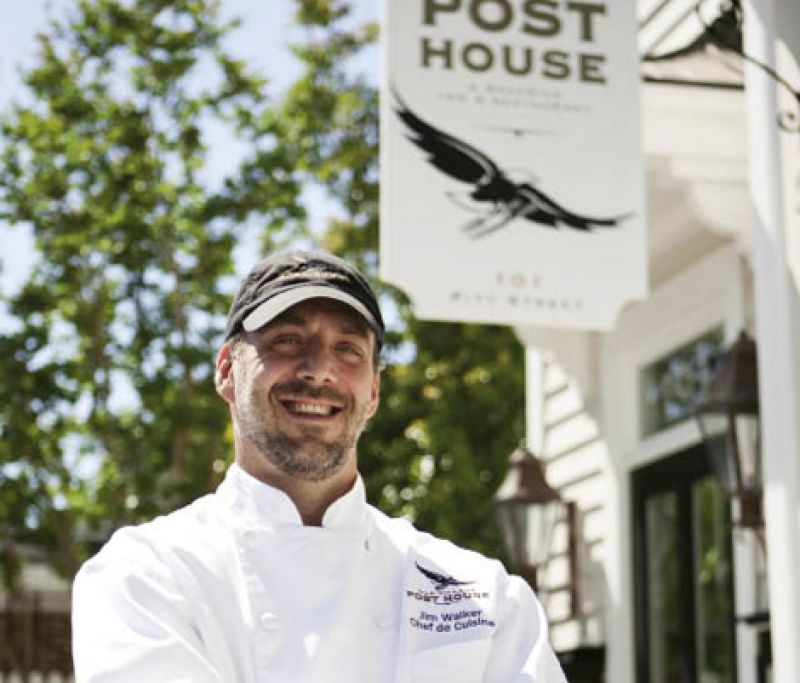 "You never thought someone from New York would be telling you how to cook shrimp, did you?” laughs Jim Walker, chef de cuisine at Old Village Post House. This Air Force veteran may not have grown up on the water, but his time spent in restaurant kitchens in Charlotte as well as Charleston—where he started as a line cook at SNOB in 2006—has helped him catch up quickly.

“It was an exciting experience to come down here and find out what seafood could taste like when it was fresh off a Shem Creek boat,” says Walker. “I really had to learn more proficient ways to peel, devein, and cook shrimp.”

For those looking to add a new seafood recipe to their repertoire, he points to the Post House’s Carolina Shrimp as one that’s easy and versatile. “We butterfly the shrimp so that when they cook, their tails curl up, allowing them to stand up in a sauce for a nice presentation,” he says. “But you can also skip the butterflying step and instead serve the shrimp and sauce over steak or grits.”

Preparing
While you do not have to remove the shrimp’s vein—the thin black line that runs along its back—most people like to. “The vein is actually the shrimp’s intestinal tract. Shrimp are bottom feeders, so there’s mostly just sand in there, but this can lead to a gritty taste if the vein isn’t removed,” explains Walker.

While peeling and/or deveining shrimp, keep the shrimp that you aren’t working with on ice so that it stays fresh.

If you plan to peel and devein the shrimp before cooking, a deveining tool—available at grocery and kitchen supply stores—will make the process quicker, accomplishing both tasks at the same time. “Look at the meatier section of the shrimp, where the head used to be. Near the top (close to the shrimp’s back), you’ll see a small hole. Insert the deveiner into the hole and push it through the shrimp all the way back to the tail. This needs to be one fluid motion, or things will get messy. The deveiner tears off the shell and opens up the shrimp’s back, removing the vein. If the vein isn’t completely removed, use the tip of the tool to scrape it away, or hold the shrimp under running water to rinse it off.”

Don’t have a deveiner? Loosen the shrimp’s shell by pinching its feet with your thumb and forefinger and pulling them to the side. Then, unwrap the shell from the shrimp. To devein, use a small paring knife to cut along the shrimp’s back, revealing the vein, which can be scraped or rinsed away.

Cooking
“A lot of people overcook shrimp, leaving it rubbery instead of moist and flakey. When cooking, you’re looking for the shrimp to turn from opaque to white, and that doesn’t take too long,” says Walker.

To boil shrimp, bring the water to a boil, then put the shrimp in and stir. It should only take u-21/25 shrimp (the size Walker uses for Old Village Post House’s Carolina Shrimp) a couple minutes to cook. “After two minutes, pull one of the bigger ones out and break it open to see if the color inside looks consistent all the way through,” instructs Walker. “If it’s almost done, then you know the smaller ones are as well. Go ahead and take them all off the heat, because they’re going to keep cooking until they cool completely.” If you’re grilling or sautéing the shrimp, check them after three or four minutes.

“If you think you’ve overcooked shrimp, take them off of the hot surface (if boiling them, use a strainer to remove them from the water) and transfer them to a clean, cool pan. Put this in the fridge, cooler, or freezer to stop the cooking.

Worried about overcooking? Look for bigger shrimp sizes. “Little ones will cook faster, so there’s a greater tendency to overcook them. Bigger ones are a little sweeter, but tend to be tougher,” says Walker.

For a simple, tasty way to make shrimp, boil them in lemon and/or lime juice. “I usually squeeze the fruit juice into the water, and then throw the fruit in too. And I always add bay leaves,” says Walker. “But you can really season them any way you want—try adding orange juice, Old Bay seasoning, Florida Bay seasoning, or blackening seasoning to the water.”