15 min with John Schumacher
December 2015
WRITER:
Lauren Brooks Johnson
Cheering for the RiverDogs isn’t the same without a bacon-wrapped corn dog—just one of the wild stadium offerings from F & B director John Schumacher. We spoke with him about his latest endeavor with co-owners Mike Veeck and Bill Murray: the new (old) Harold’s Cabin 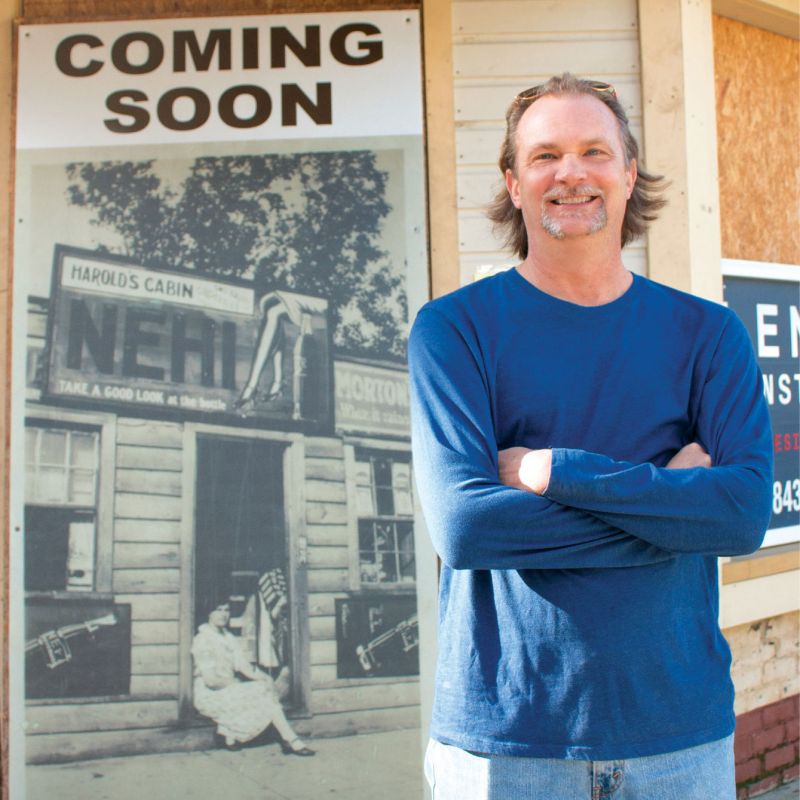 CM: How’d you get interested in reviving Harold’s Cabin?
JS: When I left the restaurant business 15 years ago to work baseball stadiums, I knew I’d return one day—but it just had to be the right place. A couple of years ago, a friend took me by the site and said, “The building’s a rundown piece of crap, but I think there’s a story behind it.” So I started checking it out, and, after some research, I knew it had soul.

CM: So what’s the story?
JS: Back in the ’20s, teenager Harold Jacobs started selling snowballs on the corner of President and Congress. (They’re like snow cones, but fluffier.) Then in the mid-’30s, his parents leased this building behind the original stand and opened up a mercantile with canned goods, produce, and weird knickknacks. Harold took over in the ’40s, and he was ahead of his time: He sold so many specialty gourmet items that Harold’s was almost like a precursor to Dean & Deluca. He was also one of the first in Charleston to carry frozen food. The store relocated to Wentworth Street in the mid-’50s, and by the mid-’70s, he decided to retire and travel with his wife, Lillian.

CM: Did you find any great relics during your research?
JS: There are so many gems. Harold left all of his papers to the Special Collections Department of the College of Charleston, including black-and-white photos. We found one of his mom under a huge Nehi soda sign in front of the store in the mid-’30s. We had it blown up and, while it’s our “Coming Soon” sign now, we plan to hang it inside.

CM:  Are there any other ways that your Harold’s Cabin nods to the original?
JS: There’s a small commercial area that’ll sell a hodgepodge of fun and funky stuff (don’t be surprised to see a can of Dapper Dan), a counter for coffee, and grab-and-go meals. People remember getting pickles out of a barrel in the store, so we may bring that back. Harold’s was also known for Savoure cheese, which has poppy seeds and a cream-cheese base, so we may recreate something similar.

Our space will have 30 seats in an elevated area on the first level and another 30 upstairs. It’s a neighborhood business. We want people to ride their bikes, walk, stop in for coffee, read the paper, and be part of this gathering place.


CM: Are we going to see the same type of gluttonous mash-ups you’re known for at The Joe?
JS:
If I’m doing what I’m supposed to, yes. But the food will still be approachable. The menu is rustic and produce-centric, but certainly not vegetarian. You might see bison on the menu, and maybe quail. We’ve constructed a rooftop garden for growing herbs, lettuce, roots, and seasonal veggies, with Leslie Wade as our resident gardener. Eventually, we’d like to get some bees up there, too.

CM: Did snowballs make the cut?
JS: They’re the first things we started on. We’ve been working to create natural syrups so they won’t stain tongues or fingers, using real-fruit flavors mixed with herbs from the garden. We’ll serve them to kids, but we’ll have some for adults, too.

CM: How’d you get started in F&B?
JS: I have a pretty eclectic background. At 13, I worked in a peach shed separating the fruit. Then I moved to a dishwasher job, and I’ve held positions in mom-and-pop restaurants, wing joints, the Marriott, and on a traveling team opening Joe’s Crab Shacks. The corporate world wasn’t my scene, but that’s where I learned the nuts and bolts.

CM: Where did you get your love of food?
JS: I grew up in a family with five kids, so my mom cooked for seven people every day. On Sundays, we’d sit down in the formal dining room and try a new recipe that she clipped from The New York Times—some good, some not so good. I think I took on her passion for food adventure.

With his Jack Rudy Cocktail Co. mixers now internationally distributed and two hit restaurants under his belt, Brooks Reitz fills us in on what fuels his creativity (hint: it’s not buying toilet paper!)

This summer, after seven years of studying at distilleries all over the globe, the former attorney opened Charleston Distilling Co. on Upper King. Here, get to know the man behind the spirits

When you show up at a party to find a Coastal Crust truck on site—wood oven blazing and wine flowing—you know it’s going to be a blast. We caught up with owner Brian Piesner to learn more about his kitchens on wheels and to get the scoop on his brand-new restaurant, Vintage Coffee & Café
Resources:
Harold’s Cabin / College of Charleston / charleston / Street / The New York Times / Garden / building / restaurants / White / Family / Restaurant / Fruit / recipe / Cheese / coffee / kids / Business / Soda / Crab / Eclectic / Produce / Fun / Mom / Travel / ONE / Original / Peach / Quail