15 Min with Brooks Reitz
May 2015
WRITER:
Allston McCrady
With his Jack Rudy Cocktail Co. mixers now internationally distributed and two hit restaurants under his belt, Brooks Reitz fills us in on what fuels his creativity (hint: it’s not buying toilet paper!) 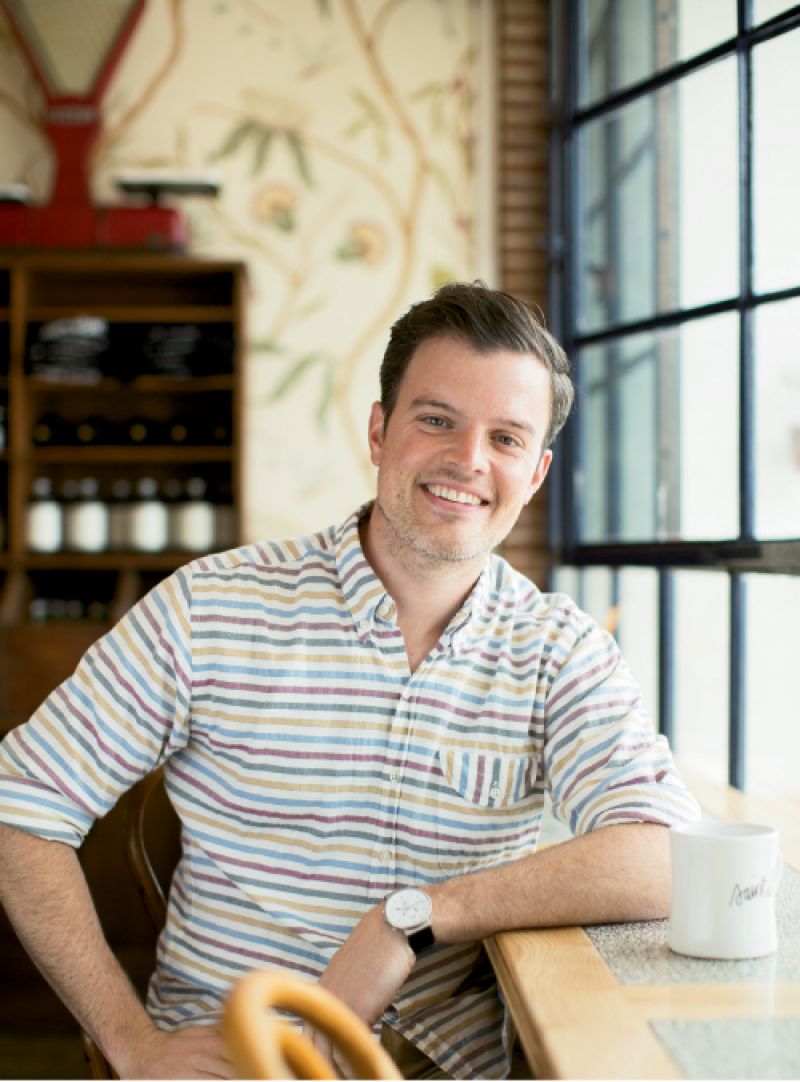 CM: You opened Saint Alban on Upper King earlier this year, yet it feels like a European bistro that’s been around forever. How did you cultivate that atmosphere?
BR: Before we took over the space, it was really ugly. It had been a rental company for stereo equipment, and for security purposes, there were no visible doors or windows. The floors were thin linoleum tile, so we sourced thick wooden flooring from an old train car and installed that instead. Now you walk in, and it feels like you’re in a café that’s 120 years old.

CM: The place is furnished with some pretty cool antiques, like those swivel tables bolted into the façade. Where on earth did you find those?
BR: I’m reticent about sharing the business name because it’s such a great source, but it’s this sort of weird, back-alley, indoor junkyard kind of place in Chicago where we find a dizzying amount of stuff. I will say that eBay and Etsy are also huge resources.

CM:  Is there anything you want people to know about Saint Alban?
BR: That it’s less of a coffee shop and more of a café. People aren’t aware of the breadth of food we serve. We just installed a walk-in cooler in the back, so we’ve reopened in the evenings, which is great now that the days are longer and the weather’s nicer.

CM: Both Saint Alban and Leon’s Oyster Shop, which you also co-own, are feasts for the senses—from the food to the décor. Do you have a design degree?
BR: No, but I travel often and stay abreast of trends and design ideas. I could probably walk through both restaurants and tell you where most of the ideas came from, such as a space I saw in London six years ago or a wall texture I noticed in New Orleans. I have a filing system in my head. I can basically remember every single thing that I see or read or do.

CM: What’s your next travel destination?
BR: I’m heading to London, because we’ve started distributing our Jack Rudy products in England. I’m also going to Cuba. I’m excited to see it in its current state—before the inevitable injection of capital from wealthy American tourists—for visual inspiration.

CM: You’re quite fit for someone with two restaurants and a beverage mixer company. How do you do it?
BR: I am guilty of eating and drinking a lot on occasion, but I’ve realized that if I’m going to be in this business, I need self-control. You go on research trips, hit all these restaurants, and just shovel food in your face. When I’m at home, I don’t drink much and try to eat healthy. I make a lot of salads and roasted vegetable dishes, avocados for days, pea purée, that sort of thing. I tried to work that into the menus at Leon’s and Saint Alban. It’s not all fried chicken and hush puppies.

CM: How do you unwind?
BR: My girlfriend [Erin Connelly, owner of Broad Street shop The Commons] and I take Sundays off, and we have a fairly set regimen. The New York Times gets delivered, so we wake up, eat breakfast, make coffee, then sit and read the paper for several hours. I try not to pop into either restaurant on Sundays because it kind of shakes me into work mode.

CM: How do you take your coffee?
BR: I’m a big fan of La Colombe, the same brand we serve at Saint Alban. We make a pour-over at home in a Chemex pot.

CM: Any new venues in the works?
BR: I don’t know how many more restaurants Charleston can handle, but creatively I would like to do more. My partner, Tim Mink, and I hope to break into consulting, to help design other people’s restaurants, particularly outside of Charleston. For me, designing and concepting is the most rewarding part of the job, versus the nuts-and-bolts business stuff, like worrying about your cost of goods or which toilet paper is cheaper.