You Say Tomato
September 2008
WRITER:
Elle McGee
PHOTOGRAPHER:
Peter Frank Edwards
We say, you’re in the right place! A look at the much-loved summer crop peeking out of Lowcountry gardens large and small. Plus: tasty new spins on tomato-inspired dishes 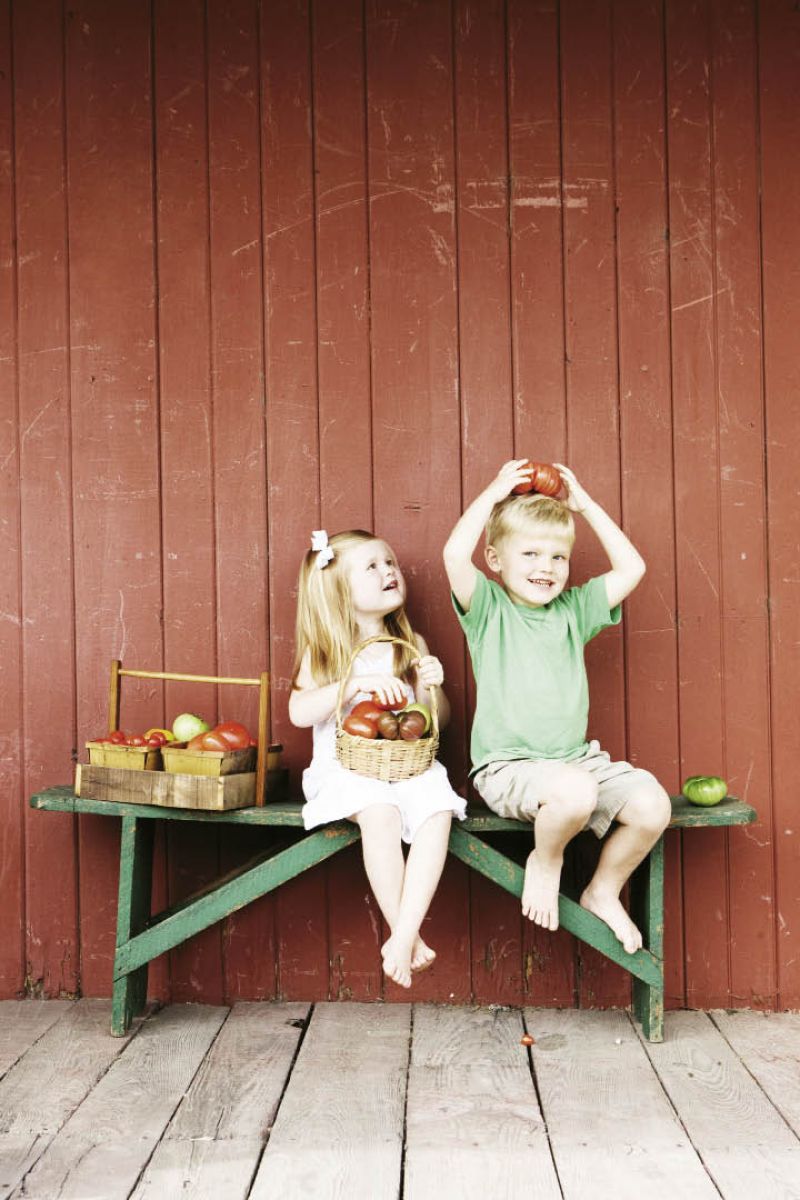 Is there anything more evocative of the Southern summer than the esteemed local tomato? Few can deny the pleasure of the succulent fruit plucked from the vine, still warm from the sun and eaten right there in the garden. Whether you envision rosy slices tucked under rounds of mozzarella; jewel-toned red, yellow, purple, and orange tomatoes chopped in a spicy salsa; or thick rounds piled on grilled burgers, these treasures are the keystone of Lowcountry supper tables. Perhaps because tomatoes are one of the most stubborn agricultural products, they are also one of the most prized—the tomato refuses to bend to our will, and thus a well-grown tomato rich with flavor remains emblematic of its season like few other fruits or vegetables. “Tomatoes are eaten all over the world, but they’re such a phenomenon in our culture; they’ve somehow become iconic to Southerners,” says Babs Ambrose of Stono Farm Market, one of the last strongholds of vine-ripe Wadmalaw tomatoes.

Wadmalaw Island, along with Johns Island, makes up some of the Lowcountry’s most fertile stretches of farmland. All manner of produce is grown there, from squash to collards to herbs, but when the weather starts to warm and summer approaches, it’s the tomato that has locals fired up. Amanda Dew Manning, proprietor of Carolina Food Pros—an organization whose focus is preserving the culinary traditions of the region—joins in the tribute to tomatoes and other local crops by leading culinary tours to farmers markets (she sings the praises of the tomato preserves from Gracie’s Kitchen, available at the Saturday markets at Marion Square) and showcasing chefs who use local products. “When it comes to tomatoes, my favorites are the heirloom varieties like Cherokee and chocolate,” she says.

The rich soils of these two barrier islands collectively produce more tomatoes than anywhere else in the country and yield a number of different varieties. Everything from tried-and-true slicers and heirlooms to the newer kinds favor the Lowcountry land and our accommodating climate. “It’s the combination of our warm temperatures; the salt and humidity in the air; and the sandy, porous soil that saturates but doesn’t hold water too close to the roots,” Ambrose affirms. And she should know, as she and husband Pete plant 10 acres of their land at Selkirk Plantation on Wadmalaw Island with tomatoes. “We plant in March—no later than mid-month—through April, and we usually harvest in June, though sometimes a bit earlier. We generally finish around mid-July,” she says. Her picks for the flavorful fruit are the Mountain Pride, Mountain Spring, and Sommerset tomatoes. As for eating them, “Warm with salt—straight from the bush and wiped off on your pants.”

So, what constitutes a good tomato? It’s heavy in the hand, has a pungent aroma, yields willingly beneath a sharp blade, boasts shiny skin, and has flesh that’s both sweet and acidic. As for finding them, these tomatoes are grown in local soil, ripened on the vine, eaten soon after picking, and never refrigerated.

Indeed, there’s no small number of Southerners who celebrate the tomato’s flavor and its intense pleasures, and who refuse to accept the mealy, anemic, commercial counterfeits. So it’s safe to say that this fruit’s future here is certainly sealed, and our tables will long be laden with local tomatoes.

Mid-March to early April is the best time to plant seeds for summer harvest in coastal South Carolina; plant again in late July for fall harvest.

The Clemson Extension website is an excellent source for how and what types to plant locally:
http://hgic.clemson.edu/factsheets/HGIC1323.htm

A small tomato variety, these fruits are known to grown wild. Good on salads or skewered
for kebabs.

These tomatoes have a fine, thick flesh, making them ideal for canning if not eaten straight from the vine.

These varieties are grown from seeds passed down through generations—often from one family
member to another.

Green
Green tomatoes are simply those that have reached their full size but are not yet ripe. They have a distinct tartness that works well whether grilled, fried, or used in soups, sauces, and
desserts.

Varieties bearing this moniker have been left on the vine to fully ripen rather than harvested prematurely and aged in the shipping and
distribution process.

More elongated than their cherry counterparts, grape
tomatoes’ 1/2- to 3/4-inch length and exceptionally sweet flavor make them a good snack for kids.

The largest variety of tomato, these are often referred to simply as “slicers” for their tendency to hold together well when sliced. They also cook down well for sauces, making them one of the most versatile tomatoes.