What’s All the ‘Brew’haha?
November 2013
WRITER:
Kinsey Gidick
PHOTOGRAPHER:
Christopher Shane
We’ll tell you. Suds are flowing all over town and it’s not just the breweries. From Egan & Sons opening in the old downtown Moe’s to Bohemian Bull Tavern & Beer Garden on James Island, Charleston’s seeing a beer-focused restaurant boom, but no two brewskie venues are alike 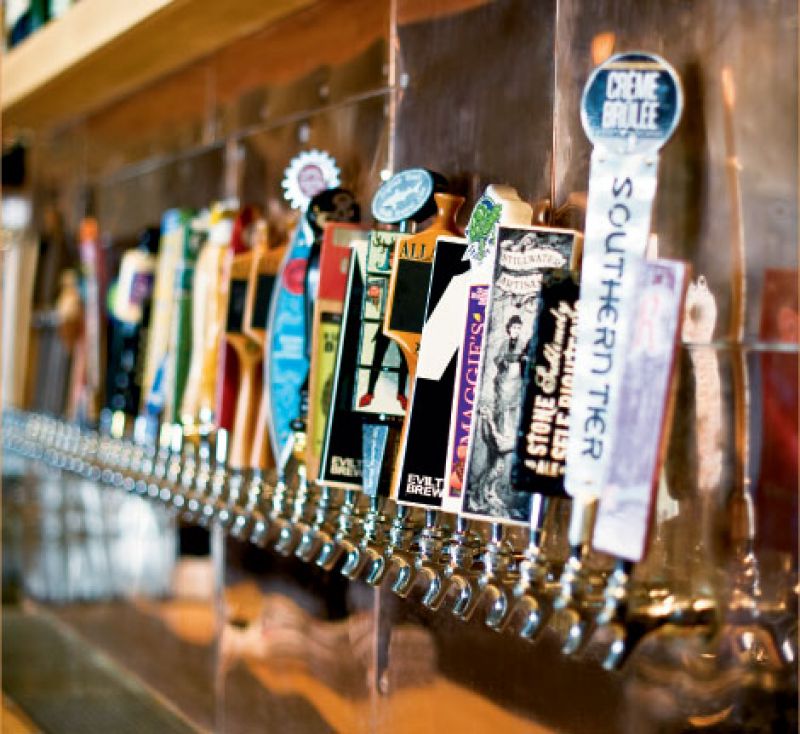 The Originator
Craftsmen Kitchen & Tap House
The leader of the suds surge, Craftsmen has been called a “craft beer Mecca.” Forty-eight beers on tap accompany chef Todd Garrigan’s evolving menu of unique twists such as Scotch eggs, a killer burger, and daily specials often cooked using their variety of beers. While they don’t have a beer garden, they do have an outdoor patio, and it’s one of the only restaurants on the Upper Peninsula where you can toast a glass of Evil Twin Brewing’s Justin Blåbær under the stars. 12 Cumberland St., (843) 577-9699, www.craftsmentaphouse.com

The Outlier
Bohemian Bull Tavern & Beer Garden
Sure it’s an outlier, but Bohemian Bull Tavern & Beer Garden is happy to be the only beer-focused restaurant opening on James Island. To that end, owner Chad Biel says the name itself is a nod to the area’s freethinking population. “James Island is full of artists, so ‘Bohemian’ is in honor of them.” But don’t arrive expecting a hippie atmosphere—instead you’ll find 32 taps, 12 TVs, and 3,000 square feet of space including a large outdoor beer garden, making it a family-friendly spot to spend the afternoon watching sports. Burgers, fried chicken, and Rueben sandwiches will comprise the menu, and the draft list will lean heavily on South Carolina brews. 1531 Folly Rd.,  (843) 225-1817, www.bohemianbull.com

Techie Taps
Bay Street  Biergarten
Yes, biergarten is German for, well, “beer garden” and the name says it all. This East Bay Street spot has been remodeled to beer haus glory with a menu full of brats, soft pretzels, and sausage spaetzel to reflect the Deutsch influence. But while the architecture and food is old timey, the technology is new wave and includes table taps with iPads for customers to explore info on breweries, ingredients, taste profiles, and pairing suggestions. “I’ve always been a tech geek,” says owner Laura Patrick. “And we thought, ‘Why not combine old and new?’” That means you can make your own flight, or try one-ounce samples from the Craft Beer Wall. Outside, the garden features bocce ball, communal seating, and plenty of TVs. 549 East Bay St., (843) 266-2437, www.baystreetbiergarten.com

Brew-to-table
Edmund’s Oast
Only the second of its kind on the peninsula, Edmund’s Oast is a brewpub. That means in addition to selling all varieties of beers, both local and regional, they brew on site. Scott Shor and Rich Carley, the brains behind The Charleston Beer Exchange, are brewing fruit- and food- influenced beers, and customers can pick up a growler of their brewskies to go. Expect a small, boutique cocktail list along with a menu from chef Andy Henderson featuring local produce. Best part? There’s enough outdoor seating to host a heck of a crowd, a huge parking lot, and bike racks to encourage pedaling to your pint. 1081 Morrison Dr., (843) 727-1145, www.edmundsoast.com

The Old Country
Egan & Sons
If you’re looking for an Irish pub experience, Egan & Sons has you covered. But don’t expect shamrock tchotchkes. Owner Chris Egan—who owns four pubs in Dublin, Ireland, and three in upstate New Jersey—has become known for his authentic Emerald Isle venues where the food is as good as what’s on tap. “We’re not a franchise. We take old properties with charm and develop them into traditional pubs,” he says. Chef Kyle Yarborough (formerly of La Fourchette) leads the kitchen and offers an eclectic menu of snout-to-tail dishes, Irish pies, and pickled veggies. 5 Cumberland St., (843) 641-0131, www.egannsons.com