Use Your Noodle
May 2011
PHOTOGRAPHER:
Jonathan Balliet
Learn to make pasta like an Italian with tips from Wild Olive’s Jacques Larson 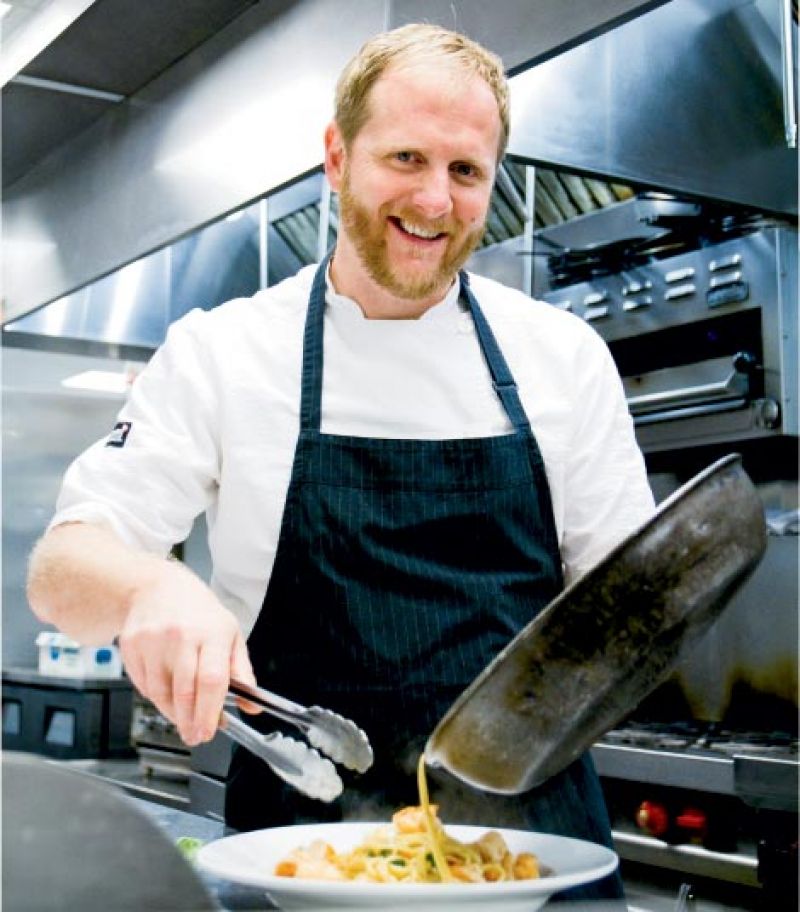 Tagliatelle with Bolognese, rigatoni with marinara, gnocchi with ragu: pasta’s undoubtedly an art form in Italy—one that can intimidate an American home cook who wants to attempt more than basic spaghetti. “Italians have strict rules when it comes to pasta,” confirms Jacques Larson, Wild Olive’s executive chef since 2009.  “And many people aren’t aware of these cultural nuances.”

The French-trained chef admits he was a little dubious about accepting a head chef position at Basil’s Trattoria & Wine Bar in North Carolina after leaving a five-year stint as sous chef at Peninsula Grill in 2002. “Early in my career, I loved the elaborate presentations that are as much the focal point of French cuisine as the food itself,” says Larson, “but the longer I spent learning about Italian cooking, the more excited I became about the beauty in its straightforward presentation.” To develop his knowledge, he went on to spend four months working in two of Mario Batali’s New York City restaurants (Lupa and OTTO) as well as in eateries in Northern Italy before returning to Charleston and opening Mercato as executive chef. “I realized that no matter how much I studied Italian cuisine, I needed to experience it first hand,” he says.

No time for a jaunt to Italy? Take your pasta up a notch with a few of Larson’s simple guidelines. For starters, “It’s very important to create the right combination of noodle and sauce,” he says. Thin noodles go with light, thin sauces while thicker pastas pair with heavy, chunky sauces. “As an example, linguine is small and delicate—perfect for a light, seafood sauce,” Larson explains. “Rigatoni, gnocchi, and tagliatelle are more suited for heavy ragus because their shapes allow chunks of sauce to get caught in nooks and crannies.”

Higher quality noodles, such as De Cecco, are worth shelling out the money for, advises the chef. “They have a better consistency and always cook in the same amount of time so that you aren’t guessing when they will be ready,” he explains. When it comes to boiling, be sure to use enough water. “For one pound of pasta, use a minimum of six quarts,” notes Larson. “Any less and you can end up with unevenly cooked noodles.”

Take advantage of an Italian trick by removing the pasta from the heat a minute before the recommended boiling time. Strain it, return it to the pot along with the sauce, and cook for the remaining minute. “This allows the noodles to absorb flavor,” Larson explains. Just be sure not to go overboard on the sauce: “You should only use enough to cover the noodles—none should be pooled in the bottom of the pot. You want the focus on the noodles as much as the sauce.”

Test your new knowledge with Larson’s recipe for linguine with Carolina shrimp, peppers, yellow tomato, lemon, and basil. For a truly authentic Italian take on this dish—and any seafood pasta—the chef shares one last guideline: “For goodness sake, don’t finish it with cheese!”