I.
Charleston,
where the sidewalks scream on Saturday nights
and the corners rotate budding musicians
with skin-tight dreams.
where strings of pearls search for salvation
then sweat out their frustrations
on the backs of rooftops.
where the homeless sprout
like weeds through concrete
seeking two dollars, a handshake,
and a little bit of sunshine.
where the humidity chokes you out of breath
but you manage to speak to the
spit-shine waiters who serve 95 dollar
bottles of wine.
where two blocks away,
a five-dollar pitcher of liquid gold
spills on the canvas of sticky floors.

Charleston,
where love lingers on cobblestone streets
in narrow alleyways, and the smell of sex
is the foundation for first and last impressions.
where shadows are surrounded by the ocean
and sea-seeing people gasp for air
from knee-deep bills and dirt-cheap thrills.
where those with
no sense of history’s melody
will sync with the songs of the city’s slaves.
where the poets scrape stanzas
off of streetlights
and if they scream loud enough, maybe someone will hear,

because we are all the same.

II.
I see poems everywhere
in my neighborhood.
they write themselves—
stumbling through winter’s relentless stare
and blinded by the bluntness of spring.
they surround you
before you slip
into the sweet darkness
of a sour night,
sorting through a history
of scrambled words.
I am the tongue-tied baby of the family.
the wide-eyed wanderer
who finally found a home.
walking past the broken down buildings
that hold the streets together
and having real conversations with America—
admiring her ball gowns
down one-way streets

while washing off the doom
of her repugnant perfume.

I see poems everywhere in my neighborhood.
they are the graffiti artists of the sky,
the glowing conversations
written in the stars,
the phone numbers
typed into cell phones,
the endless puddles of alcohol
that linger like rain in an unholy city,
looking for God amongst the ghosts within. 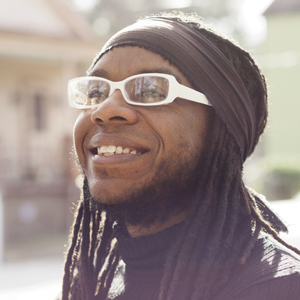