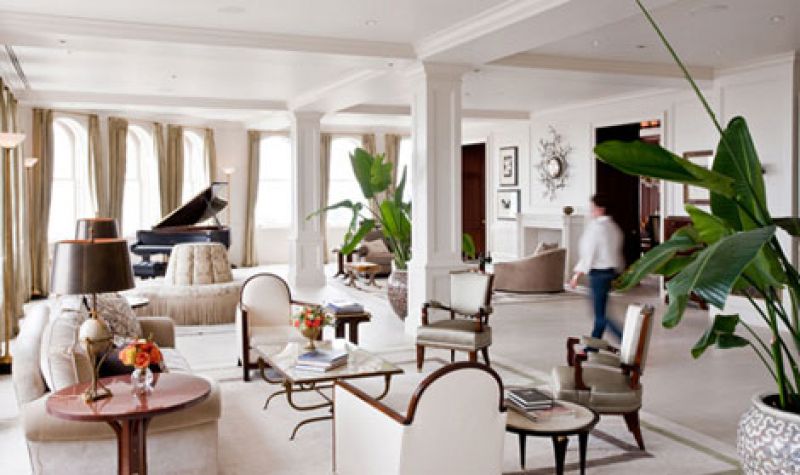 In her stylish skybox near the foot of Broad Street, Terri Henning catches a panoramic play-by-play as a typical Charleston day unfolds. From her bed, she bids the sun welcome as it yawns over Sullivan’s Island, dappling the harbor with silver and yellow. Coffee brews as she looks down at traffic beginning to trickle up East Bay. Trucks unload over near the Custom House. Eight floors below, a woman waters flower boxes on Chalmers Street as a car crawls along the cobblestones. In this penthouse perch at the historic People’s Building, each of the 70-plus immaculately restored arched windows offers a constant game of peek-a-boo on pedestrian life. As the sun climbs higher around noon, red tin roofs ripen in color, like tomatoes on a vine, and lunch-goers take to the streets—a small line outside Fast & French, a few takers for the hot dog vendor up on Meeting. As evening encroaches, the light shifts yet again, spilling pink and orange across West Ashley, and Terri settles in her “keeping room” off the kitchen and raises a glass, offering her daily benediction. “Good day, sunshine,” she toasts. “Sunset might be my favorite view. The colors are amazing. And I love watching the city light up at night.” Actually, just about everything is amazing, both inside and out, in this expansive home-on-high, including the tale of its transformation from gutted offices to tranquil residence. When Terri and her late husband, Ed, a passionate vintage car collector, took an option to buy the eighth floor of what was once Charleston’s tallest building, their intention was purely investment. Build out two condos then sell. After all, the newlyweds were comfortable in Ed’s lovely home on King Street, “and I was afraid he wouldn’t be happy living up here,” says Terri. “It was too removed from his cars.” That was 1999, the year they were married. In 2001, Ed Henning was killed in a motorcycle accident. A year later, emerging from a tunnel of grief, Terri awoke one morning at dawn and took her dogs for a walk, ending up at the People’s Building. “We came up and watched the sunrise, an incredible sunrise, and that’s when I decided to move forward with the project,” she says. Terri finalized the deal and began dreaming of how to breathe new life into this grand and vast space. The landmark building served as People’s National Bank from 1911 to 1936, then housed various offices, and when Terri took ownership, the space was a blank slate without plumbing, electrical, or HVAC, only roof leaks and umpteen glorious windows, all of which needed rebuilding. The four-year undertaking was more than just a construction and design project—Terri was simultaneously redesigning her life following a heartbreaking loss. “This was an emotional journey for Terri,” says designer Monique Gibson, whom Terri hired, along with local contractor James Meadors, to shepherd her through the process. “She had envisioned her life another way. This project was not just about a place to put pretty things. It wasn’t about ‘a sofa goes here, a table there.’” Even if it was, Terri was clueless, at first, about what kind of sofa or table she’d even want. She’d lived previously in Ed’s home, already furnished and heavy on Italian Renaissance. “When Monique asked me what kind of style I wanted, I said, ‘Huh?’ I didn’t know Biedermeier from a bathroom,” she laughs. But Terri knew and appreciated beauty, her aesthetic refined through her love of fine cars, and had an eagerness and excitement to learn. “Her adventuresome spirit was incredible to work with,” affirms the New York-based Gibson, whose client roster includes other spirited, creative types such as Elton John and John Mellencamp. After months of perusing antiques stores and auction houses in New York and abroad, Terri honed her tastes, ultimately resonating with the sleek elegance of French designers from the 1930s and ’40s. The apartment’s nimbus, light-filled feel is accented by the gentle Deco curves and glossy wood of furniture by Jules Leleu, Emile-Jacques Ruhlmann, and Jacques Adnet, which Gibson dressed with soothing creams and wispy blues. Numerous seating areas help cozy up the sprawling living room that Terri wanted large enough for big parties, yet intimate enough for relaxed comfort. Indeed, “calm, quiet, comfortable” were the words she kept repeating when describing the effect she sought. Gibson obliged with a clean, natural palette in harmony with surrounding hues of sky and water. “I wanted simple, elegant. I’m not a frou-frou kind of girl,” says Terri. When the top ninth floor became available midway through the renovation, she snatched it, adjusting the floor plans to add a staircase leading to guest quarters, complete with pool table, small kitchen, and the pièce de résistance—an unsurpassed 360-degree view from the terrace. Despite the lush serenity that the apartment décor conveys, a warm vitality abides here. Terri’s gregarious and generous spirit ensures that this pied-à-air remains the “people’s” building. She regularly welcomes friends for spunky spur-of-the-moment get-togethers. Sunset happy hours in her Sheila Wertimer-designed terrace garden redefine “girls’ night out,” and swanky Henning-hosted chef dinners for large groups are hot items at numerous charity auctions. “Opening up my home is a joy for me. I’ve always believed that if you don’t share, you shouldn’t have,” Terri says. And she knows, too, that what she has here, with the steeples of St. Philip’s and St. Michael’s as her faithful neighbors, is truly special. “I look out these windows and get a whole different perspective,” she says, “how European Charleston feels when you see only the rooftops. I may have limited wall space for art, but I have beauty all around me. This view is art that’s moving all the time.”