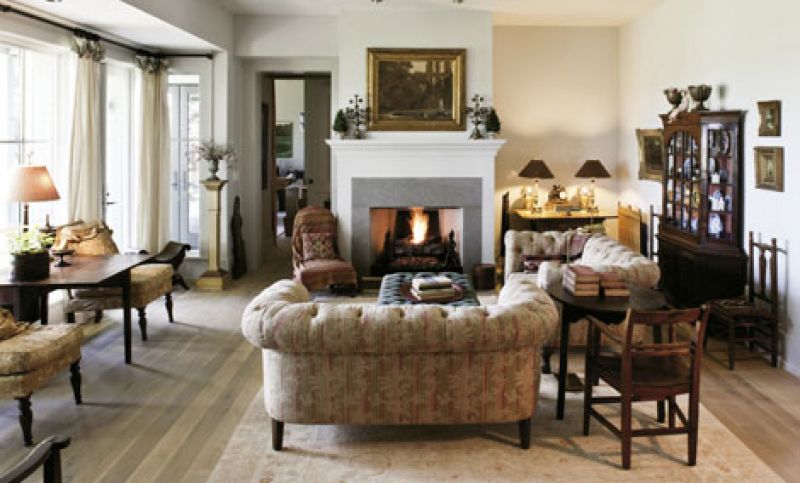 Wind your way through the newish Rushland Landing neighborhood off John’s Island’s River Road, and you cross a slip of a bridge, pass a copse of towering pastille-colored houses, and then find yourself within sight of the Stono River. There, skimming the place where marsh meets land, is an anomaly in this subdivision and the others like it that have cropped up on the island: a subtle, lanky home that blends into the scene, tucked away under towering oaks and masked by palms and foliage to look like a luxe camp on the fringe of some African savannah.

“Every time we look out over the marsh,” says owner Geertruida “Gee” van Vliet, “we feel like we’re on safari. And it resembles the lowlands in which we grew up—the salty smells, the sounds of the birds, the sailboats that roam up and down the waterway. This is our outpost, our rambling ranch.”

Some outpost. Gee and her husband, Nico, conceived the place about four years ago, when they were looking for the dream zip code in which to settle after sending the last of their three kids off to college. Given that the Dutch-born couple has lived, worked, and raised their family across Europe and America, it’s no small thing that Charleston won out.

Over coffee, the pair slip between Dutch and English as Gee fiddles with an invitation to their just-celebrated 40th wedding anniversary; the card’s vintage image is that of a globe-trotting 1960s couple—the van Vliets themselves.

Before they became that glamorous duo, Nico was a family friend via Gee’s cousin. Sixteen years her senior, he tagged along for ski trips and other family outings. By the time Gee had earned a law degree, she had grown out of the kid cousin role. And Nico—a television host, documentary producer, and well-known broadcast persona who would earn his communications master’s in the States; cover Washington, D.C., and the United Nations; and eventually head one of Holland’s TV networks—noticed.

The day sparks first flew, the two were touring his then-new house, an old cottage in an artists’ community with an inventive paint job: Player’s cigarette blue on the ceiling and cabinets. The home’s smart modern-meets-antique décor landed it in a Dutch magazine and became the domestic repertoire the couple shares today. (The Biedermeier table in the van Vliets’ foyer once paired with six horsehair-covered chairs to serve as Nico’s bachelor-era dining set.)

While the two courted, Gee took a post as a lawyer at Brussels’ European Common Market, one of the precursors to today’s European Union. When Nico was called to D.C. as a correspondent, he asked for her hand. They married stateside and began the first step of a decade-by-decade dance, with one whirl spent in America, one overseas, and back in the U.S. again.

The stories are fantastic: taking their infant and toddler daughters to Holland on the QE2; moving to Connecticut and fixing up a 1910 carriage house; hearing of “exotic-sounding” Kiawah and coming to South Carolina for a vacation; buying a Charleston single on Meeting Street because the warmth and romance of the South called them back—their teen son had been accepted into Porter-Gaud, and why not live in the most walkable, European-flavored city in the United States?

By 2005, with son Nicolaas and the girls out of the nest, Gee and Nico began hunting for a slice of rural property. “Prior to Charleston, we always lived in the country,” she says, “and we wanted to be there again, but still connected to society. When we found this lot 20 minutes from the city, it was perfect.”

Designer Beau Clowney and his assistant, Kate Campbell, came on board to realize the van Vliets’ dream retreat. The end result is that “rambling ranch” they adore. “I’ve traveled the world with this furniture,” says Gee of the case goods and keepsakes that surround them. “Everything’s recycled from our other homes—things that came from family or that we’ve had forever. Even the curtains were altered to fit.”

As for their style? Nico, with his blue eyes and silver hair, looks at his wife with her steel-colored curls and green gaze. Their combined colorations are the exact palette of their home. “Mish-mash,” he grins, “that’s our style. Comfortable. Aesthetically beautiful.”

“Nay,” interrupts Gee. “Aesthetically beautiful? I just like to collect things and put them together in a way that’s peaceful and restful.”

“I don’t know about that,” dismisses Gee. “But it feels right.”