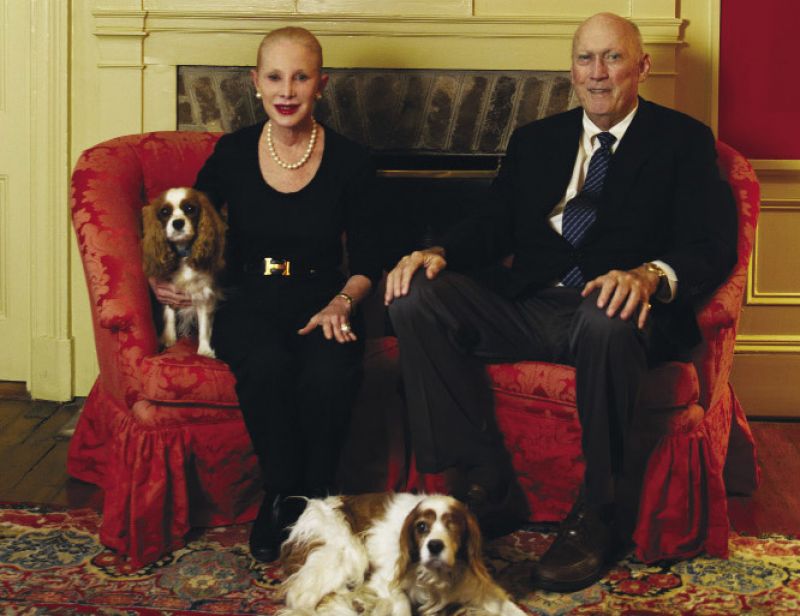 It would be easy to get overwhelmed sitting in the front parlor of Secessionville Manor alongside owners Esther and Jim Ferguson. First, there’s the house and its place in history. Built in 1837 at the southeastern tip of James Island, the Greek Revival home once anchored a small collection of summer cottages that island plantation owners built as waterfront warm-weather getaways. When Southern states began pulling away from the United States, area residents dubbed their little enclave on the Ashley “Secessionville.” By 1862, the lobster-claw-shaped peninsula housed Fort Lamar, and on June 16 of that year, it became the site of the first true battle of the Civil War, a landmark clash that wrested the life from 107 Union and 52 Confederate soldiers and awarded the South a victory that was both strategic and rousing.

Secessionville Manor itself became a hospital whose doctors treated soldiers on both sides, and once the dust settled on the war and the Emancipation Proclamation came into full effect, the house and its outlying buildings became a tiny freedmen’s community. In time, though, those families relocated to the equivalent of their 40 acres, and a succession of old-time plantation-owning families reclaimed the property, passing and selling it from generation to generation until 1987, when the Fergusons bought it.

So the manor is filled with nearly two centuries of stories, but its history isn’t its only impressive aspect. There’s also the artwork, a museum-worthy collection that the couple has amassed since 1984. Behind the parlor’s Queen Anne settee sits a Jacqueline portrait by Picasso. Over the Federal-style mantel hangs a de Kooning. A few feet away, that’s a Rauschenberg. And, in the foyer, that is indeed a Rodin bust of his pal Victor Hugo.

Then there are the owners, who themselves are noteworthy. Esther—a Hartsville, South Carolina, native who moved to New York for work and the cosmopolitan life—was involved with the National Drop-Out Prevention Network and scores of nonprofit boards, graced the pages of Town & Country, and later became a longtime board member for Spoleto Festival USA here in the Lowcountry, as well as sponsor of the International Piano Series at the College of Charleston. For his part, Jim, an Evanston, Illinois-born Midwesterner, is the former CEO of General Foods who shepherded iconic brands like Stove Top Stuffing, Cool Whip, and more into the American lexicon and got his buddy Bill Cosby to sing the praises of Jell-O. Glance around, and you’ll catch family photos mingling with meet-and-greet shots with presidents Reagan and Bush (George H. W. and George W.), Queen Elizabeth, and on.

In spite of this trifecta of notables—house, art, rubbing elbows with world leaders—Secessionville Manor is a home, of which its owners are engaging, ebullient hosts. Ring the bell, and just like most any other suburban house here on James Island, a pair of dogs answers the door. In the Fergusons’ case, it’s their Cavalier King Charles spaniels wriggling with delight to greet visitors. So rather than be overwhelmed by all that surrounds, guests are able to experience the place for what it is, the art at face value, and the Fergusons as amiable new acquaintances. It’s thus, stripped of pretense, that the couple, who met and wed in New York, explained how their path led to Charleston and this little oasis back in the late ’80s.

“I had visited Charleston on a couple of occasions with Esther for Spoleto functions,” explains Jim. “Then in 1987, a friend through the festival told us to come because she’d ‘found our house,’ so we flew down. When we walked out on the piazza, there were dolphins going by, and that did it for me. It was not only picturesque, but there was a sense of nature, something we didn’t get very often where we had been living.”

At that time, Jim was in the prologue of his retirement, and the couple first began using the place as a weekend retreat, then eventually gravitated to it over residences in New York, Aspen, and Spain, because it “felt good,” says Jim, and “was very romantic,” adds Esther. By the time Jim retired officially in 1989, they had sold their Manhattan duplex and “put our stakes down here,” he says.

Fortunately, previous owners had maintained the house so well that the couple’s only changes amounted to upgrades. Esther had plastic vanities and combo shower stall-tubs replaced with porcelain and the like, the garage converted into a guest cottage, the landscape revitalized, and the parlor freshened up with layers of rich red paint to showcase the artwork. “The color here came about because for so long art museums had white walls, then dark gray or blue,” says Esther. “I went with red—red walls, red furniture—so that when you come in, the art jumps off the walls. It’s so much more fun when it leaps.”

That sense of fun dominates a tour of the rest of the home as well, thanks to the Fergusons’ genuine enthusiasm for its art and historical aspects and their show-and-tell, touch-and-feel approach. In the main hall, for instance, Esther hung glass frames over graffiti that Civil War soldiers had drawn on the walls; passing by, she pulls out a magnifying glass to examine a nearby photo from the National Archives, a black-and-white image of the house and its supporting structures after the war, complete with freedmen standing about. In honor of them, she began collecting painter William Aiken Walker’s portraits (he specialized in freedmen and Reconstruction imagery) and hung them throughout the hallway.

Move into the entrance hall, and Esther shows how to put your thumbs in bronzed Victor Hugo’s ears, as though you were Rodin himself, shaping the clay. “You know,” she points out, “Hugo wouldn’t sit for him, though they were friends, and Rodin had to do this from memory.” Head out onto the waterside piazza, and she shows the porch spindles where soldiers chipped away notches with their bayonets, she postulates. “So many of them were just boys after all.”

Upstairs in the master suite, Esther points out some more Civil War-era graffiti, a train going this way and a soldier marching that way with a pipe in his mouth and a bugle on his back. “You can see how short the person who drew this must have been,” she points out, referring to its chest height, “and since the train is going that way, he was likely left-handed.”

Downstairs in the den, Jim laughs about how the overhead timbers make it a treacherous spot for his six-foot-three frame. And here Esther gives as much tour time to the grandkids’ guest quarters and specially embroidered towels as she does to the original Chippendale settee near the fireplace. It all boils down to something Jim explains while walking and talking.

“When we first had the house, we were highly conscious of it as something for which we were stewards more than anything else,” he says. “We still feel that we are its stewards, but we don’t ruminate over it as much. There’s a trust there, that its entrusted to our care, but it is very much home.”

Want to see the Fergusons’ amazing artwork in person? You’re in luck, as the collection goes on display at the Gibbes Museum of Art this spring

Like any other home, Secessionville Manor requires occasional upkeep. As it’s been many years since the home’s interiors were painted, the Fergusons are lending their art to the Gibbes Museum for a special exhibit, “Modern Masters from the Ferguson Collection,” that will run April 30 through August 22 as the residence undergoes its freshening. “We’ve had the house open to hundreds of people in the past,” says Esther. “But this is different. It will expose so many more to the artwork. We are thrilled to be able to do it.” As a special precursor to the exhibit, the Fergusons have asked their friend and world-renowned artist Christo to come to Charleston and discuss his numerous large-scale temporary installations, such as The Gates in Central Park (Memminger Auditorium. April 13, Tuesday, 5:30 p.m. $35; $25 member; $15 student).