Easy as Shrimp Pie
July 2009
For Charlestonians of centuries past, Sunday supper often consisted of a casserole highlighting the fruits of the season’s harvest 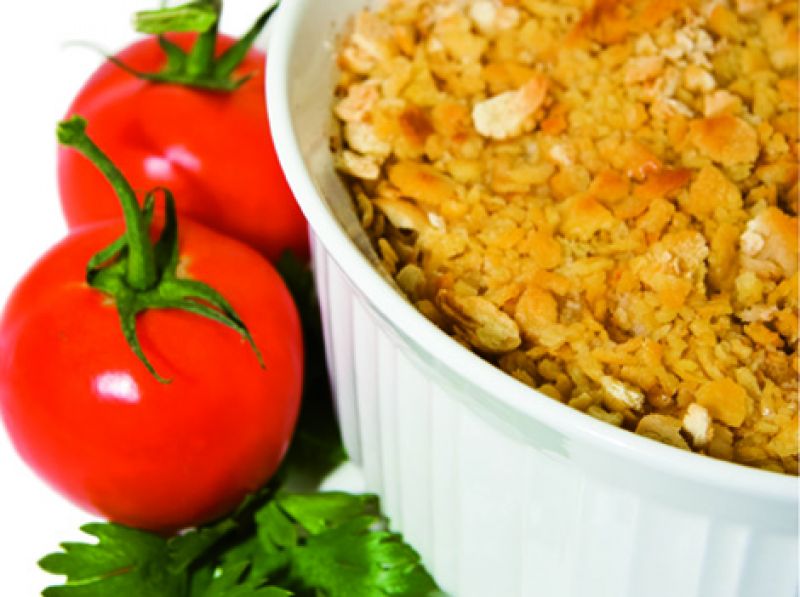 We think of casseroles as modern, but they became common on local tables in the late 19th century, when most downtown households employed a cook. Traditionally given Sunday afternoons off, the cook put together a savory main dish, then called a “pie,” that the mistress could simply slide into the oven before supper. These pies were often composed of leftovers from the midday meal—meat, poultry, fish, shellfish, and vegetables mixed with leftover rice, stale bread, or cracker crumbs.

Of all these variations, Miss Rutledge’s “Baked Shrimps and Tomatoes” was the loveliest. A composition of shrimp, stewed tomatoes, and crumbs, enriched with butter and seasoned with the restraint that sweet shrimp and tomatoes demand, it was already a standard on Lowcountry tables when she set it down and would remain so well into the 20th century.

For today’s cooks, a few notes on Miss Rutledge’s ingredients: When she calls for “pounded biscuit,” she isn’t referring to the breakfast bread common today; she’s using the word’s older form, meaning crackers. Dried biscuit crumbs can be used, but oyster crackers are closer to her intent.

Most modern cooks will reach for a can of stewed tomatoes, and this will work, but Miss Rutledge meant for her readers to use fresh fruit. Taking the extra step of stewing your own will make all the difference in the world to the flavor.

Butter well a deep dish, upon which place a thick layer of pounded biscuit. Having picked and boiled your shrimps, put them upon the biscuit; a layer of shrimps, with small pieces of butter, a little pepper, mace, or nutmeg. On the top of the shrimps a layer of stewed tomatoes, with a little butter, pepper, and salt. Then add a thin layer of beat biscuit, and another of shrimps, and so on, till three or four layers of both are put in the dish. The last layer must be of biscuit. Bake, and brown the whole.