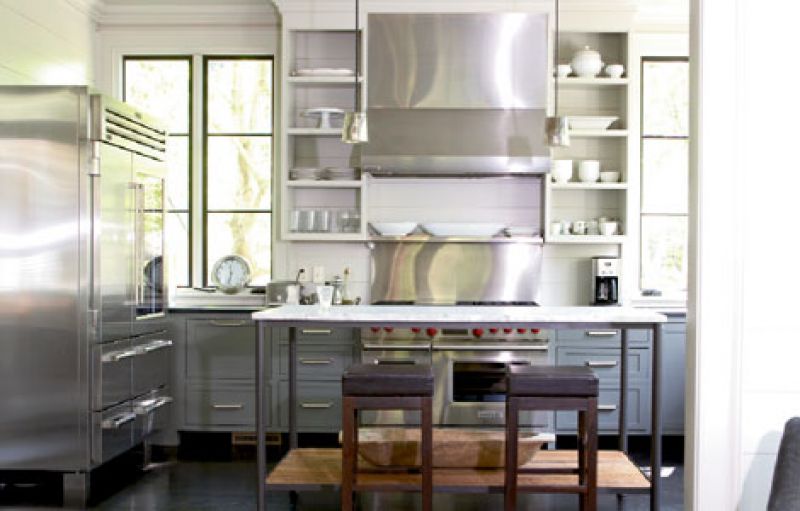 When Alison and Michael Brewer first met as rising College of Charleston juniors, they found an unlikely common ground—real estate. Turns out both had an interest in developing and a love of design, no matter that they were pretty young for such endeavors. Less than a year after they began dating, the Holy City natives knew they were going to get married. But before anything was close to being official, they had already bought their first piece of property together—a small lot in the Old Windermere area in West Ashley. “Our parents were surprised,” says Michael, “to say the least.”

That was 12 years ago. Since then, the couple has made a life building, rehabbing, and decorating homes. He runs M Designs and Development with a partner, and the boutique firm is now known for its new homes in particular. This past spring, their traditional-chic creations, which blend effortlessly into Charleston’s existing neighborhoods and streetscapes, earned the group a “Three Sisters Award” from the Committee to Save the City. (Given to those who preserve and sustain the fabric of the region, the award has also been bestowed on the likes of Croghan’s as a King Street institution; Alphonso Brown for his Gullah Tours; and a handful of developers, authors, tradesfolk, and more.) For her part, Alison is the fixtures, color, and interiors consultant for M Design projects, and, along with an associate, has recently started an interiors business, Nest Design and Antiques, that keeps a booth at Terrace Oaks Antiques on James Island.

On the personal front, the Brewer family expanded with the addition of two young daughters, and with each child, they moved to accommodate their growing brood. As a result, Michael and Alison got to try out the many new ideas they came across in their line of work, thanks to being in the business. And these “ideas” are solid—so much so that one of their former residences even landed on the cover of the national magazine, Home. So how does the husband and wife duo sink their teeth into a new collaboration and fashion yet another dream space? Take a look at their latest abode, a 1926 Craftsman house South of Broad.

Back in 2005, the two had recently sold their third downtown house and set out in search of new digs. Early one Friday morning, Michael spotted a primo FSBO (For Sale by Owner) in the real estate section, so he and Alison bundled up their then-two-year-old daughter, Grayson, and hustled over to check the place out from the sidewalk.

“We loved it,” Michael says of the two-story brick home with its shaded porch and deep lot. “So I waited until a respectable hour—nine—and then called.” The owner hadn’t planned to show it until the following Monday, but somehow
Michael and Alison lucked out and got a walk-through. “When we stepped inside, we were smitten. The house’s bones were there, the yard was there, the parking was there—it was great.”

Turns out the Brewers had stumbled upon a rarity in the downtown market: a home that had been custom-built expressly for one family and had stayed in that same family ever since. The owner—a woman whose aunt had lived there since she was two years old—had the original blueprints and building orders, and both the footprint and the interiors (the latter a pristine white) had stayed virtually the same since its inception. That meant that any changes the Brewers foresaw wouldn’t entail correcting past rehabs. “We put in a contract immediately,” recalls Alison.

Over the next year, Michael and Alison slipped into rehab mode and moved into temporary digs in the meantime. With the help of local firm Dufford Young Architects, who collaborated on the project, they got BAR approval to make an addition to the house to change it from a three-bedroom, one-bath into a 3,100-square-foot, four-bedroom, three-and-a-half-bath home.

That took six months, and when they got the green light, they opened up the interior staircase by taking out part of the entry hall ceiling, then had Southern Lumber add additional posts to mimic the originals. To make uniform the mismatched floors (upstairs pine, downstairs oak), they stained the floors dark ebony. Much of the interior went back to the studs so the pair could add air conditioning to the house, which had been chiefly used as a winter home for the original owners. Because the window headers were set at eight feet, but the door frames were much lower, they increased the height of all the doorways and had new millwork made identical to the old.

Toward the back of the house, the Brewers converted what had been a porch into a bridge space between the old structure and the new addition. On the first floor, the “hyphen” leads to a small breakfast nook, which then opens onto the place where they spend most of their time: a window-wrapped kitchen and family room space.

On the second floor, the addition meant new square footage that allowed a nursery for now-toddler Mary Wade, and a sleeping-porch-like suite for Grayson. On the front of the house, Michael and Alison opted to keep the master bedroom, with its fireplace and second-story porch access, for themselves and added a swank limestone and tile bath that looks straight out of a spa.

“This house,” says Michael, “represents a lot of what we’ve learned along the way. It’s very comfortable and big on functionality.” And it’s loaded with the couple’s signature look: neutral palettes, custom lighting, high-grade materials (marble, limestone, tile, stainless steel, paneling), premium fixtures, terrific trim, top-of-the-line appliances, and a mix of heirloom antiques, clean-lined contemporary pieces upholstered in velvets and linens, and sublime original artwork. When they invited one of the home’s previous inhabitants to visit after the rehab dust had long settled, she marveled at the new, “modern” life they’d given her childhood home.

Today, Michael and Alison relax in the front living room and say that in all honesty, they could easily be happy here another couple of years.

Alison smiles. “We see eye to eye,” she says. “We both just love the creative process.”