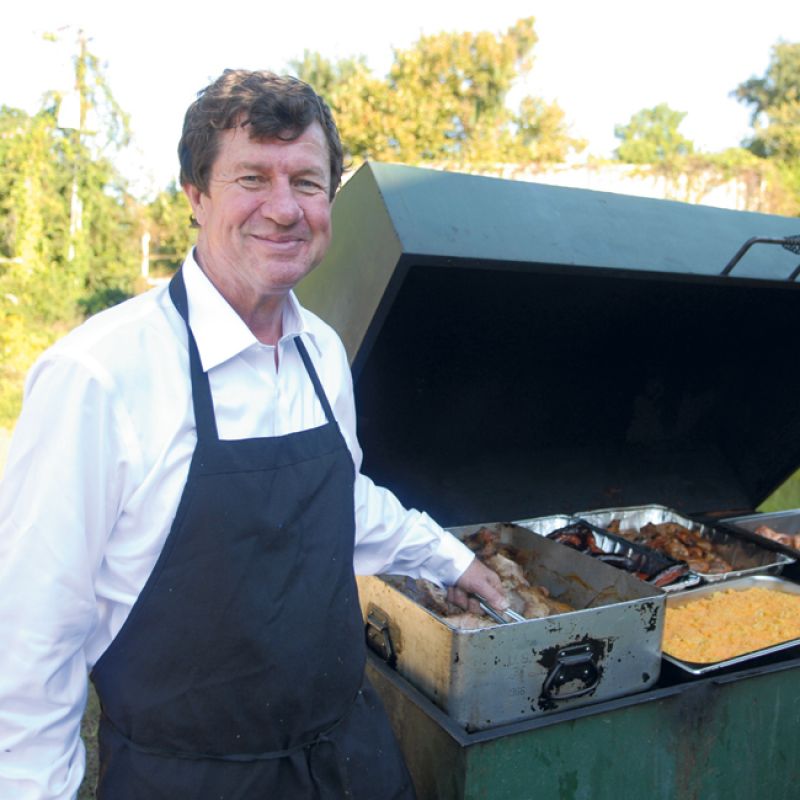 Chances are, if you’ve ever been to a Lowcountry benefit where there’s outdoor grilling involved, Jamie Westendorff has had a hand in the fare you’ve piled upon your plate. Westendorff, who operates Charleston Outdoor Catering (COC) from a small warehouse-styled kitchen on St. Andrews Boulevard, got into cooking by happenstance. While earning a masters degree in history at The Citadel, he paid for tuition with fix-it jobs and after graduation, those gigs often took him into restaurant kitchens. When he started tackling fryer repair, too, chefs asked him to help set up the contraptions when they catered. “When they’d need a break, they’d ask me to watch the grills,” says Westendorff, “and after a little while, I thought I could do it myself.”

That was in the late 1970s, and today, Westendorff commands an army of cookers and a staff who serve up barbecued pork, Frogmore Stew, steamed oysters, fried fish, mac and cheese, “killer green beans,” and the like. As for how he fell into charity, that was more a birthright, he says, as his father, who ran a downtown hardware store, and grandfather, who grew up in the Lowcountry Orphan House on Calhoun, were both “always giving, giving, giving,” says Westendorff. For his part, the list of just whom COC serves is a head-spinner: American Lung Association, American Red Cross, Boy Scouts Troop 79, Charleston Community Sailing, MUSC Children’s Hospital, Muscular Dystrophy Association, Sertoma Charities, Special Olympics, The Ronald McDonald House, Windwood Farm Home for Children, various schools, and local churches are just a few. Throughout Westendorff’s 35-year career, he “has donated hundreds of thousands of dollars worth of food, catering services, and auction items to support individuals in need and nonprofit organizations,” says Eleanor Smythe, director of Camp Happy Days, another beneficiary of his generosity.

In fact, of all the good works Westendorff has been involved with, the one that most quickly shakes him up and energizes him both is Camp Happy Days’ camp on Lake Marion where kids with cancer (and their families) spend the week of Fourth of July together doing decidedly normal camp activities, all for free. When you’re talking about an often-terminal illness, the value of “normal” can’t be understated, says “Rooster,” as the kids call him, who has headed the camp mess hall for some 20 years. “You’d think that after a week doing lunches and dinners in that heat you would be absolutely fatigued, that you’d go home and crash,” Westendorff says, “but instead, you’re so much stronger and so much bigger for what you did, and if anything, you are afraid to leave because some of the kids you met this year might not come back next year.”

Blue Plate Special: In one week at Camp Happy Days, Westendorff and his crew of 10 volunteer cooks serve 7,200 plates of food to 400-plus campers and their families. He offers their services for free and gets the food donated or at cost, and one night that week treats the entire camp to steak, shrimp, and crab dinners on his own dime.
Hurricane Relief: When Hurricane Hugo devastated Charleston, Westendorff set up his grills in Marion Square to feed an estimated 25,000 people. He also helped feed storm victims after Hurricane Ivan tore through Florida and when Katrina demolished New Orleans.