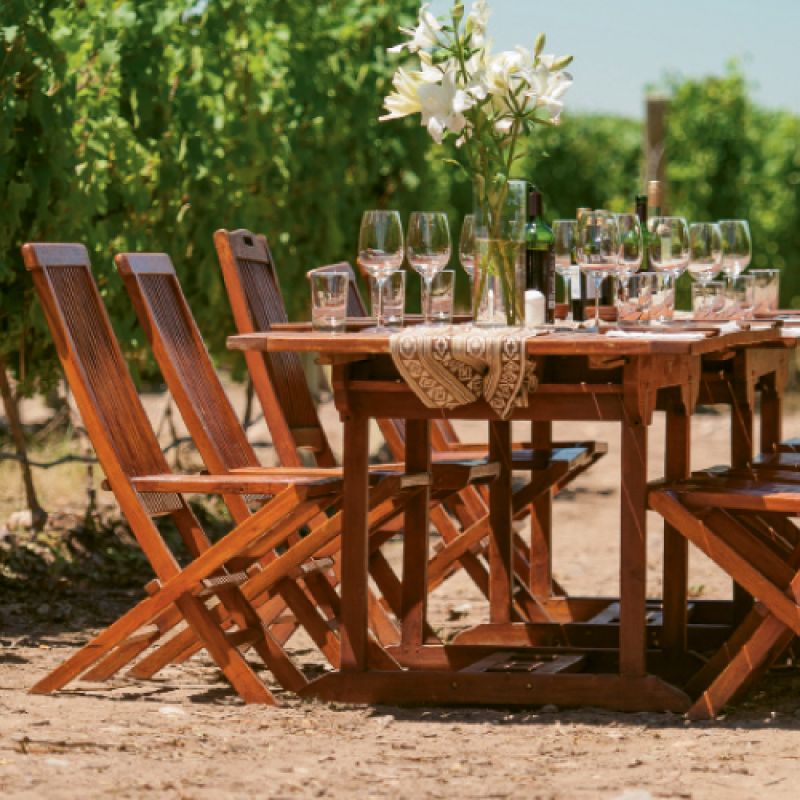 Mira Winery
Mira’s vineyard may be located in Napa, but its president is Charleston resident Jim “Bear” Dyke Jr., who founded the company with acclaimed winemaker Gustavo Gonzalez in 2009. Since then, the pair has maintained a strong local presence, from experimenting with aging their wines underwater in Charleston Harbor to commissioning David Boatwright’s buzzed-about Renoir Redux: Exceptional Pairings mural, which graces the exterior of Mira’s new Queen Street tasting room. www.miranapa.com

Perception Wines
After years of working as the sommelier at Charleston Grill, Mark Ray moved to California to pursue his passion for winemaking. He teamed up with two longtime Lowcountry pals, Shane MacNicholas and Dean Felber, to launch this small-lot Russian River Valley winery. (Fun fact: Dean is also the bassist for Hootie and the Blowfish.) The trio aims to make the finest possible pinot noirs, chardonnays, and zinfandels by focusing on extremely limited but high-quality releases. New bottles are released only twice a year, and the vast majority are sold to mailing-list members (there’s no fee to join the list). www.perceptionwines.com

Cultivate Wines
This L.A.-based company is a négociant, meaning staffers don’t grow grapes themselves. Instead, they find, blend, and bottle wine sourced from producers in Italy, Argentina, Chile, and California. As Cultivate’s winemaker, Charleston resident Nat Gunter travels the globe to source the best picks—at the best prices—in pursuit of the company’s egalitarian mission. “We feel an urge and a responsibility to craft wines that are affordable, accessible, and shareable,” Gunter says. With those words in mind, the company gives 10 percent of revenue to community-based nonprofits; since 2011, it’s invested more than $430,000 in 46 different organizations such as Habitat for Humanity and Autism Speaks. www.cultivatewines.com

The Angel Oak
Locals will recognize the grand old tree stamped on the bottle, but these wines are produced in the Valle de Uco, a wine-growing region on the slopes of Argentina’s Andes Mountains. So where does the Angel Oak come in? The wines are produced in SignoSeis Vineyards, run by six locals including managing partner (and restaurateur) Nigel Cooper, who started the biz to create custom wines for Husk and McCrady’s; The Angel Oak name aims to give the bottles a local identity. The business now supplies other area restaurants and wine stores, too. Their hand-harvested, premium wines include a fruity torrontés and a delicate rosé. www.angeloakwine.com

Luna de Esperanza
It’s no coincidence that this line of boutique wines is also produced in the Valle de Uco; like Angel Oak, the grapes are grown within the Vines of Mendoza, a 1,500-acre vineyard that sells individual plots to winemakers. Named for South Carolina’s crescent moon, Luna de Esperanza is co-owned by vino-lovers Andy Berly and David Lyle. While on a trip to Argentina, the two realized they could create their own vineyard, and they jumped at the chance. They made their debut last fall with two limited-production malbecs—one barrel-fermented, and the other blended with petite sirah and merlot. Look for the company to add more red wines to its portfolio in the coming months. www.lunadeesperanza.com

Wonderment Wines
Inspired by memories of her father making muscadine wine in the laundry room, South Carolina native Stephanie Cook Sedmak founded Wonderment Wines in 2013. With a background in the culinary arts and event planning, the Charleston resident has spent the last few years working under acclaimed winemakers from Sonoma to New Zealand, creating connections with a variety of growers to source grapes for her wines, which are produced in Napa but carried throughout the Lowcountry at places such as Crushed Fine Wine and Kiawah Wines. Wonderment currently makes zinfandel, pinot noir, and petite sirah. www.wondermentwines.com