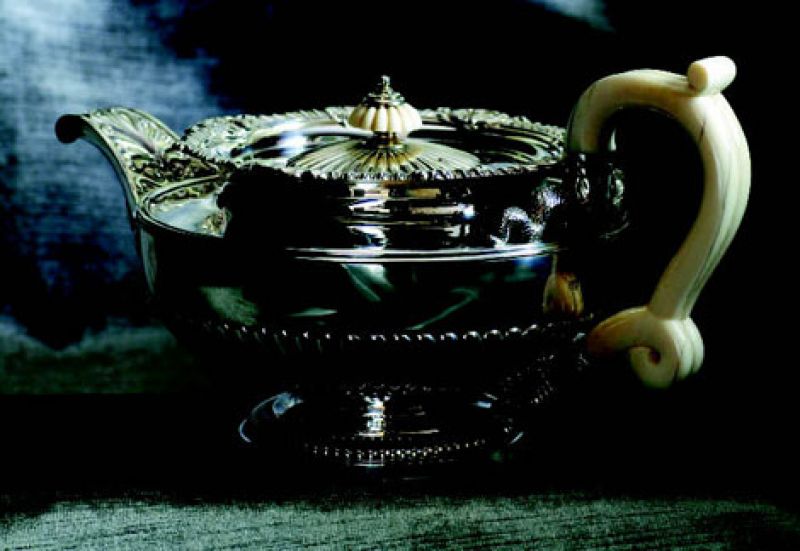 Paul Storr Teapot { London, circa 1817 }
This Regency teapot showcases the highly collectible work for which the silversmith was renowned. Often referred to as “cabinet silver,” these items were rarely used and valued mainly for the beauty and civility they conveyed. This magnificent piece was housed in a locked secretary on a Lowcountry plantation for many years.

Paul Storr (1771-1844, London) is considered among the world’s finest silversmiths and revered for his Regency designs. Although he never held an official royal title, Storr counted prominent figures, such as King George III, among his patrons. His designs can be found in museums around the world. 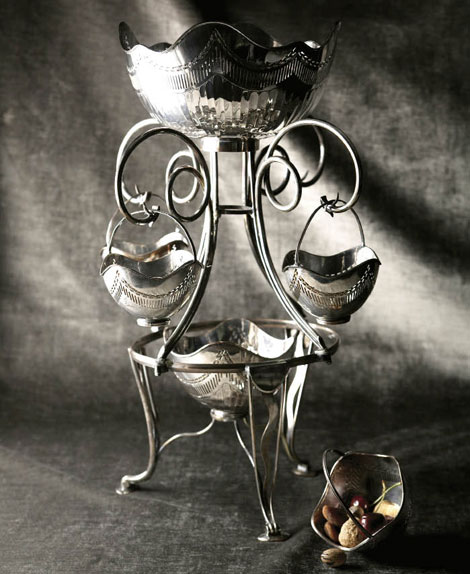 Sheffield Epergne { Sheffield, England, circa 1760 }
This Neoclassical epergne—which stood in a Church Street home until recently—was crafted from silver and copper, or Sheffield Plate. Reflecting the abundance and graciousness of 18th-century Charleston, its baskets traditionally would have been filled with a bounty of fruits and nuts; a pineapple—the symbol for hospitality and a rare commodity—would have proudly rested in the top. (Right) After many centuries of use, the slat pierced design (called reticulation) reveals the copper beneath the silver plate. “The ensign armorial is most likely English,” says Corley, “and typically indicates a family or hunt club’s ownership.”

Definition: { Sheffield Plate } Created by Thomas Boulsover of Sheffield’s Cutlers Company in 1743, Sheffield Plate is a layered amalgamation of silver and copper used to produce a variety of household items at less cost than sterling silver. Today, these pieces are as highly prized and valued as their sterling counterparts. 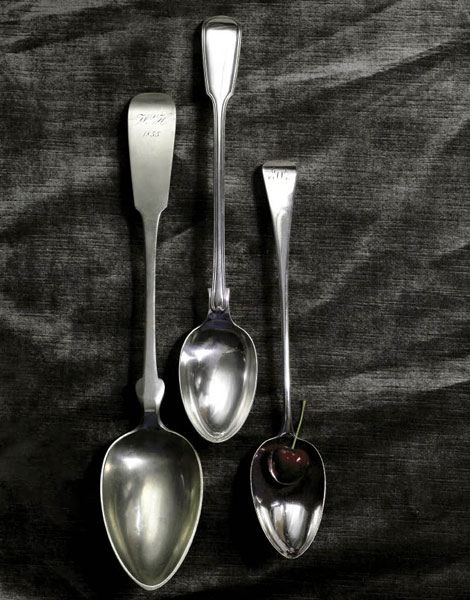 Coin Silver Flatware { Charleston, circa 1840-1860 }
Innumerable silver pieces, such as these locally crafted coin silver spoons, were lost during the Civil War. Many were buried to avert pillaging and looting but never recovered; others
migrated to the North. “When I began collecting, the City Market was full of silver like this,” Corley recalls. “Bearing the initials of early Charleston families, these pieces were once sold with little or no regard for their historic value.” (Left to right) Coin silver tablespoon, circa 1840, by Hayden, Gregg, & Company; dessert spoon, circa 1849-52, by silversmith James E. Spear, who owned a shop on King Street; and teaspoon, circa 1860, by W. Carrington.

Definition: { Coin Silver } A uniquely American silver, it is associated with melted coins and refers to silver made prior to the Civil War that was graded .900, comparable with sterling which is .925. Some coin silver from Charleston comprised actual melted coins while others were made from the alloy. 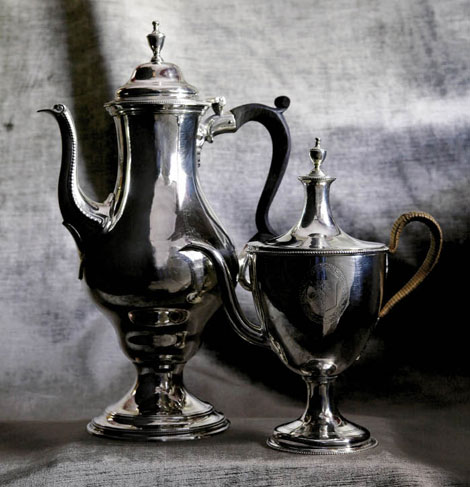 Hester Bateman Teapot & Argyle { London, teapot, circa 1782 & argyle, circa 1780 }
These 18th-century vessels of fine sterling crafted by renowned English silversmith Hester Bateman reflect the refined British influence on Charleston. Living in the only American city with a tea plantation, locals valued their teapots over many other silver accessories, implementing them in the garden as well as the parlor. Tall and elegant, this teapot (left), with its baluster form and scrolled handle and spout, would have been the pride of the 18th-century Charleston home. The argyle (right) is a petite treasure—rare by virtue of its perfectly intact components. Often used for gravies or sauces, this urn-style pot was also later put into service for hot water. The extreme curve of the spout allows for liquids to pass with ease, and its original woven handle prevents the transfer of heat. A prized heirloom from an early Charleston family, it transcends modern decorative tastes and remains an item of great fascination.

Hester Bateman (1709-1794) began her long career after the death of her husband, John, in 1760. She built upon his business as a chain maker, entering her first silver mark in 1761. Bateman went on to become one of the best known female silversmiths working in London during the 18th century. 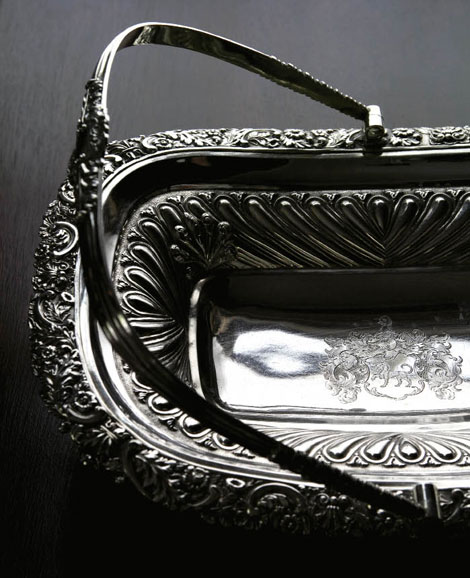 Paul Storr Basket { London, circa 1816 }
An extremely rare Paul Storr work, this open basket of heavy-gauge English sterling engraved with the crest of the Wolsey family of Staffordshire would have been the centerpiece of a dining table or sideboard and used to hold breads or fruits. Implemented later in the Victorian period as a bride’s basket or cake basket, it likely held flowers or petite sweets for the bride and groom. “It’s quite large,” says Corley. “I have seen it hold a half dozen camellia blooms.” 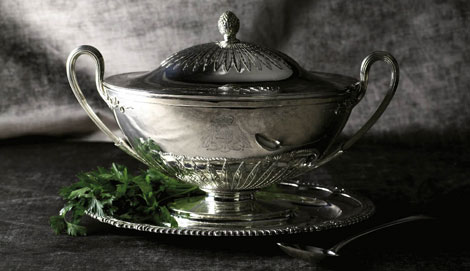 George III Tureen { London, circa 1779 }
Crafted for royalty, this hollowware tureen with reeded handles, leaf chasing, and engraved game feathers by John Wakelin and William Taylor of London bears the arms of H. R. H. Duke of Du Boulay of Donhead Hall and the motto “Semper Fidelis” (always faithful). In fact, Wakelin briefly acted as goldsmith and jeweler to King George III in 1797.This weighty tureen of heavy-gauge English sterling made its way into the hands of a wealthy planter on a Lowcountry country estate, where it was undoubtably put into service for rice perlou or shrimp gumbo. A separate piece, called an undertray, rests beneath the tureen.

Definition: { Hollowware }The term refers to table service items such as sugar bowls, creamers, coffee pots, teapots, soup tureens, water pitchers, platters, and other metal items not including flatware. Constructed for durability, it has thicker walls and more la yers of silver plate. 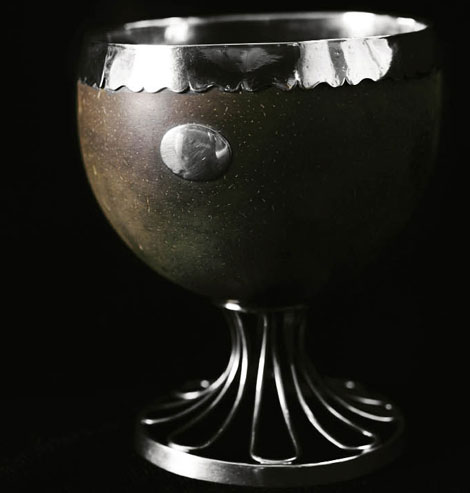 Coconut Cup
This toasting cup, crafted from a coconut shell and clad in coin silver, came from a family whose Charleston lineage traces back to the 1730s. Extremely rare, it was considered one of the best pieces in a home filled with silver from early Charleston. Chalices such as this were made in England (as far back as the 13th century) as well as other locales. The treasured heirloom has survived the use of multiple generations by careful storage and display. It features a lovely oval silver plaque that was never engraved—further enhancing the mystery of who has owned it and for what event it was originally constructed. 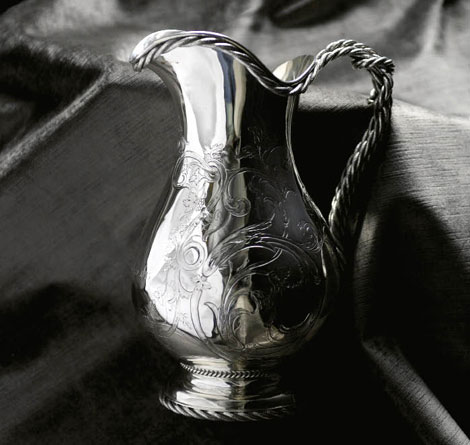 Pitcher { France, circa 1801 }
This pitcher—one of a pair engraved “Christmas 1845” for a bride’s present and used in the dining room of the George Chisolm House—is a rare example of antebellum silver associated with Charleston. Included in Susan Sully’s book Charleston Architecture and Interiors, the large, dramatic vessel features gadrooning, a purposeful rope border decoration that signifies strength. The rope border is further accentuated by the dimensional twined rope handle, artfully attached to the body with a silver “nail.” The surface is chased with grapes and vines, a decoration commonly known as “La Vigne.” Bearing French hallmarks, the pitchers were made nearly 50 years before they were inscribed in 1845. One can imagine they were treasures of a family’s past, presented anew half a century later.

Definition:{ Chasing }This method used to embellish a metal surface, especially silver, makes a curvilinear, multidimensional engraving with a hammer and blunt tools. It often was used to enhance decorative designs that were punched from underneath.