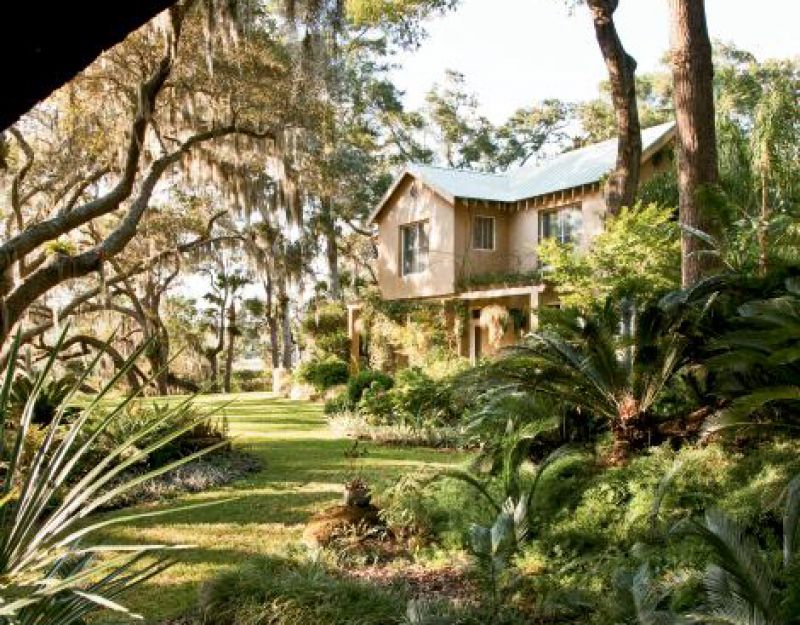 Real gardeners give themselves away pretty easily. They show off photo albums of their Edens as someone else might share a baby brag book. They vacation in areas where botanical parks dwell. They take winter trips to climes where prolific, exotic nurseries thrive year-round; soothe themselves to sleep with tantalizing plant catalogs; and carry shovels, clippers, and plastic garbage bags in their cars at all times. And if you want to ask them over during daylight hours after work or on weekends, forget it—they’ve got plans.

So it goes with Alejandro González and Jim Smeal, pastry chefs by profession and green thumbs by nature, and has gone since they bought a wooded marshfront lot off James Island’s Fort Johnson Road in 1999. Known as Eastwood, the shady stretch of land was the domain of the Easterling family, whose patriarch, William Clyde Easterling, gifted the nearby James Island Yacht Club its current home base from their land holdings back in 1955. By the time González and Smeal came to know the area, the one-time huge swath of land had been sold off lot by lot until only a few acres—and the charred remnants of the family’s 1946 home, which had burned in 1994—were left.

“It was just ruins,” says Smeal. “Beautiful with trees, camellias, and azaleas but choked with vines and poison ivy. We took one look at it and said, ‘No way.’ It was too much work, too much for us to take on, too expensive.” But when a real estate agent talked out some options—selling off one chunk of the property and using the proceeds to rebuild on the footprint of the old home’s foundation—the pair warmed up to the idea and decided to go for it.

“Neither of us had gardened on this scale,” says Smeal, adding that the two previously had only a small spot to tend at their former downtown Charleston home. But neither was unaccustomed to getting his hands dirty, either, as each had grown up trailing along behind parents or grandparents as their elders dug, planted, pruned, watered, and nursed flora into florabudance. Both even tended yard chickens as kids—Smeal in Pennsylvania and González in Mexico. So the duo got to work clearing their new place out.

They wrapped clumps of the tree-bound vines in rope that they lashed to their truck and hit the gas to pull the invaders loose. They filled two dumpsters worth of underbrush and house refuse and graded the lot by hand. As they labored outside, the pair got to know the nuances of the property. They learned that the soil was sandy; that the waterfront side is a little cooler than the stretch in front of the house; and that during any equinox, the water rises enough to cover a peninsula that splinters off toward the city.

As both talked out garden plans, Smeal, who’s a graduate of the Rhode Island School of Design, dreamt up the house. Its doors would open to views at every turn; its windows would frame lush scenes; its loggia would provide ample lounging; and somewhere, it’d have a discreet outdoor shower. As for the landscape, that would be a continuation of the inside-out dwelling, comprised of layered gardens in which the pair could both test out new plant varieties and relax once the day’s work was done.

“Jim sees the whole picture and is the designer,” says González. “And Alejandro has limitless energy,” adds Smeal. From their combined efforts and talents, what blossomed over the past decade is now a series of winding cul-de-sac lawns that branch off the house in spoke-like fashion, little “rooms” around which themed gardens grow.

“I like yellows, oranges, and reds—hot colors!” says González, who thus spearheaded the tropical garden abundant with banana plants, bromeliads, and ferns that reaches from the front door to where the property borders the dirt road. “Jim likes more grays, whites, and greens—calm colors,” he continues, so Smeal headed up the mellow-toned and oak-laden woodland garden that neighbors the tropical area and wraps from the front to the marsh and backside of the house. Other “rooms” include the Italian garden, named for its allée of Italian cypresses (though today it’s evolving in the grass direction) and the aforementioned peninsula, a concoction of agave, ice plants, and yucca that shoots off the mainland into the marsh.

Most recently, González tamed a wild corner that ran along the road toward the marsh. “This area was covered in pine seedlings; you couldn’t even see the oak a few seasons ago,” says Smeal, now standing by a hard-to-miss towering tree. “I was ready to leave it alone—we had plenty to take care of already,” he continues, “but Alejandro went in there, cleared everything out, and came up with this grasses garden.” Before Smeal spreads a low-maintenance swath that began as a grass-framed labyrinth but morphed into an undulating wave pattern of Aztec grass instead. Opposite it is a “spiky” garden with cacti, grasses, and succulents that will take care of themselves.

Walking the land with the two, their passion reigns apparent as each clucks over what’s thriving, what needs attention, how a particular newbie plant might fare over there, and how the setting sun hits the Spanish moss in perfect harmony. And even as González claims they are “trying to simplify, to only have what’s hardy, what doesn’t need a lot of water, what we really love,” you sense both can barely resist the pull to further mold their mini paradise. Maybe that’s because, as González puts it, “You never really garden in the present—you garden in the future. You wonder how a plant is going to perform, how it is all going to be once it’s grown in.”

Until then, they’ll happily continue to trail botanical gardens like others follow bands, cart shovels and buckets everywhere, and remain altogether unavailable to the outside (human) world when their day jobs are done and the plants call. “We’re very much plant and garden fanatics,” explains Smeal with a grin and a shrug. “We just love to collect and be outdoors.”