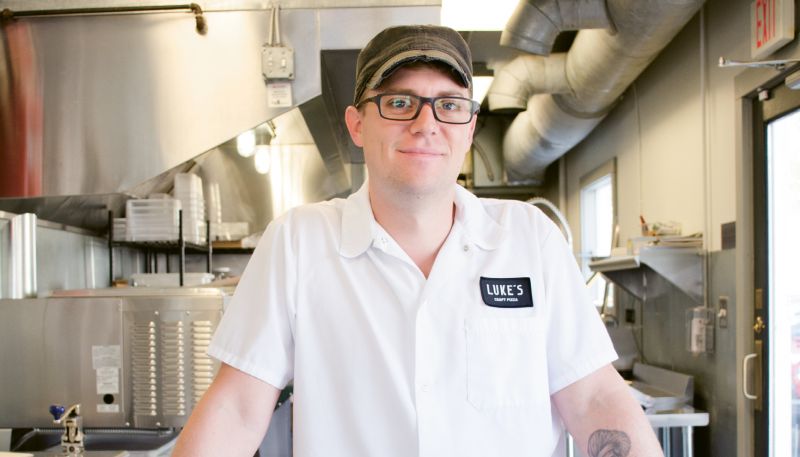 CM: Why Charleston?
LD: I was born and raised in Columbus, Ohio, but my family always vacationed in Myrtle Beach and Hilton Head. I’d heard great things about the food and arts in Charleston, and after a weeklong visit in 2013, my then-girlfriend Brittany (we met in Columbus and married in 2015 on Isle of Palms) and I packed up and moved down South. I started out as a sous chef at Crust, then worked at Monza. Eventually, I became the kitchen manager at Mellow Mushroom, where I did a little bit of everything—ordering; managing staff, numbers, and sales; and dealing with the food. It was a 70- to 80-hour workweek, but I knew the experience would help when I ultimately opened my own place.

CM: How did you get into pizza?
LD: Instead of taking the traditional college route after high school, I headed out West to work for a skateboarding company. But after a while, I missed being in a kitchen—I’d grown up helping my mom prepare dinner for our family every night. So I left San Diego and headed back to Ohio, where I received a degree from Columbus Culinary Institute. I first started making pizza while still in school, working for an Italian restaurant. I didn’t think much of it at the time, but after doing other gigs, I missed pizza.

CM: Does your current tiny space on Ashley Avenue pose any limitations?
LD: Brittany and I actively sought out a small space; we always knew it was just going to be the two of us. We keep it simple: we don’t do half/half toppings; we have one set ingredient list; we use two purveyors, Limehouse for produce and the local division of International Gourmet Foods for meat and cheese; we offer one weekly special; and we only make 50 pizzas a night. I aim to do a handful of things really well rather than a slew of things adequately. Instead of frozen pepperoni, we’re using sliced-by-hand Casalingo salami. We have all the classic staple ingredients of a pizzeria, just elevated.

CM: How do you balance being both an owner and a chef?
LD: Thankfully Brittany, who has a graphic design degree and front-of-house restaurant experience, is very good at customer service, bookkeeping, and social media. If it involves a computer, she’s on it. I handle the food side. I’m insanely organized—some may call it OCD. Because we’ve kept everything so small-scale, nothing is wasted and everything has a place.

CM: What’s one of your favorite pizza shops you’ve been to?
LD:
There’s a place called Wally’s Pizza near my parents’ home in Cambridge, a small town in eastern Ohio. We go whenever I visit. It’s grandma style, which means they roll out the dough on a full-size sheet tray, spread red sauce on top, and then bake it. They put the cheese and pepperoni on after they take the sheet out of the oven, so the cheese is just slightly melted and the pepperoni is room temperature. And it’s even better cold the next day.

CM: Do you ever tire of pizza? What keeps it fresh and fun for you?
LD:
I only eat pizza about twice a week—I think I love making it more than eating it. I’m always looking for ways to get creative with the dough. Lately, I’ve been experimenting with different styles of pizza for fun, such as deep dish, Detroit style, cheese bread, and more. When Hurricane Matthew hit, Brittany and I were out of the shop for six days. I was itching to get back in the kitchen.

CM: Any long-term goals for expansion?
LD: We’re not actively looking for something different or bigger. If, in five years, we want to open a sit-down, full-service place, maybe we will. Right now, we’re just going with the flow. 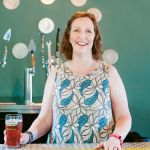 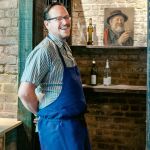