Where the Art Is
May 2018
WRITER:
Bridget Venatta
PHOTOGRAPHER:
Julia Lynn 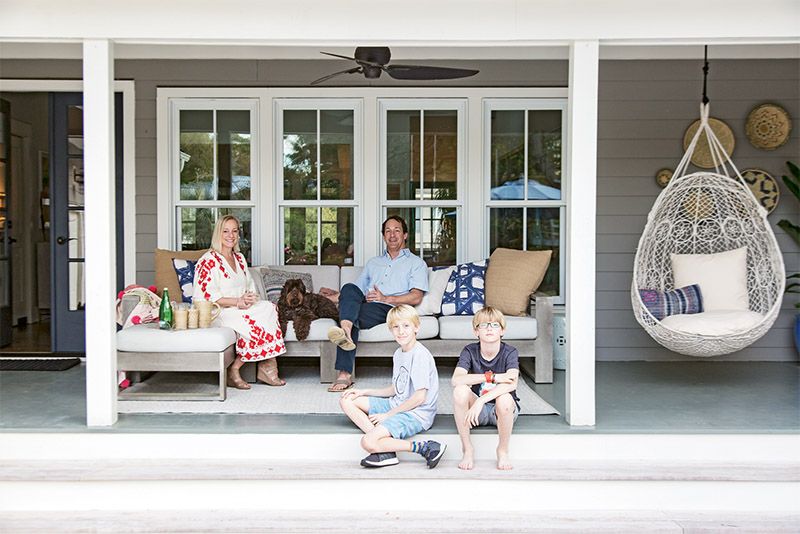 PHOTO: Allison and Bright Williamson; their 11-year-old twins, Ben and Henry; and Labradoodle Chief relax on the back porch.

It’s Allison Williamson’s business to make art accessible: since launching Charleston Artist Collective in 2009, she has used the pioneering web-based gallery to sell thousands of works by area artists. With prices starting at $75, the site puts original artwork within reach for a whole new audience—and that audience continues to balloon, thanks to partnerships with national brands like Serena & Lily and One Kings Lane, plus the launch of sister sites in Nashville, Atlanta, and Washington, D.C. Of the idea that sparked the biz almost a decade ago, she says: “I felt if I could deliver art to people’s desktops, I could make buying art less intimidating.”

Given her “art-for-all” mind-set, it’s no surprise that the Bayview Acres ranch Allison and her husband, Bright, share with their 11-year-old twins, Ben and Henry, and Australian Labradoodle, Chief, is both art-filled and totally family-friendly. Sure, the walls of the 2,400-square-foot abode display a rotating cast of canvases from the Williamsons’ collection, and many of them—including a bottle-cap portrait of Frida Kahlo by Charleston Artist Collective member Molly B. Right and a piece, titled “XX,” by genre-defying, Whitney Museum-exhibiting artist Don ZanFagna—are showstoppers.

Other works are invaluable and sentimental, such as the African masks from Bright’s childhood home and the dream catchers and bow-and-arrow sets the boys made themselves. Allison, who studied art history at Sewanee, isn’t afraid to mix pedigreed pieces with heirlooms and handcrafted items; in fact, for her, that’s kind of the point. “It’s important to have a mix and a variety, and the children’s art is some of my favorite in the house,” she notes.

With its open floor plan and generous allotment of windows, the three-bedroom home provides the perfect light-filled backdrop. But it wasn’t always that way. When Bright purchased the house in 1999, it had low ceilings, a choppy layout, and a dated brick exterior. Shortly after, the couple decided to rent it out and move to Park City, Utah, where Bright worked in technology and Allison ran a gallery focused on Russian impressionism.

After the birth of their sons, though, the couple felt pulled back to the Lowcountry and rented on Sullivan’s Island while hunting for a permanent home. “The more we looked around, the more we thought: why don’t we just renovate the house in Bayview Acres?” Allison says. “You can’t beat the location. It’s central to everything and so close to downtown and the beach.”

The location was prime, but after serving as a rental for many years, a total refresh was in order. The duo enlisted architectural designer Hunter Kennedy to help open up the layout and modernize the aesthetic.

To that end, Kennedy designed a striking shed dormer over the living area, almost doubling the ceiling height. The new roof line allows for clerestory windows, which provide loads of natural light. He also designed the addition of a back porch, master suite, and front entry and reconfigured the footprint: the kitchen moved from the center of the house to the north side, paving the way for an open-concept floor plan. The new layout is much more attuned to the Williamsons’ lifestyle. “From my kitchen, I can see the dining room, den, and living room, straight down into my boys’ room,” Allison notes.

Though the home is now visually open, individual living spaces are still well-defined. For example, Kennedy designed inset cabinets between the kitchen and living room to provide storage and establish distinctly separate zones. “They help articulate the transition between those two areas,” Kennedy notes.

The kitchen itself packs a lot into 600 square feet: a built-in custom dining table juts off the island, adding a contemporary asymmetrical design element and much-needed gathering spot. The adjacent den with its comfy sectional is the boys’ preferred spot to relax or do homework while their parents cook dinner.

Of course, artwork is present even in the splash zones. Allison is unafraid to hang canvases anywhere, even close to the range. “I’ll freely hang art in the kitchen or bath, because oil paintings are more durable than you think,” she notes. “If something happens to spatter, you can take a damp cloth and wipe it off.”

The home’s exterior got a facelift, too. Kennedy designed a new front porch and swapped out brick for slate-grey siding. “This old ranch house was in dire need of street presence,” he notes. “The new front entry was meant to challenge the assumptions of what you might find inside.”

With the bones of the home updated to suit their needs, the Williamsons turned to friend and interior designer Jenny Keenan for help with choosing paint colors and accents. Many of the furnishings, like the Verellen sofa, slipcovered armchairs, and sideboard from Wisteria, are neutral-hued, allowing art and textiles, like rugs Williamson collected in Morocco, to add color and texture. “Allison’s house is an ongoing project because it’s ever-changing,” says Keenan. “To most it seems finished, but between her travels and art acquisitions, there is always movement, which makes it feel alive.”

“It’s hard being in the business; I’m constantly tempted to buy new pieces,” Williamson admits. One common thread unites whatever’s currently on display: “The art in my home makes me happy,” she notes. “In any home, the art shows the personality of the people who live there, and I think ours is very bright and cheerful.”