The Jazz Man
November 2010
Playing upon natural rhythm and a lifelong passion for music, Charleston Jazz Orchestra artistic director Charlton Singleton has upped the tempo of both modern and traditional jazz in the Lowcountry 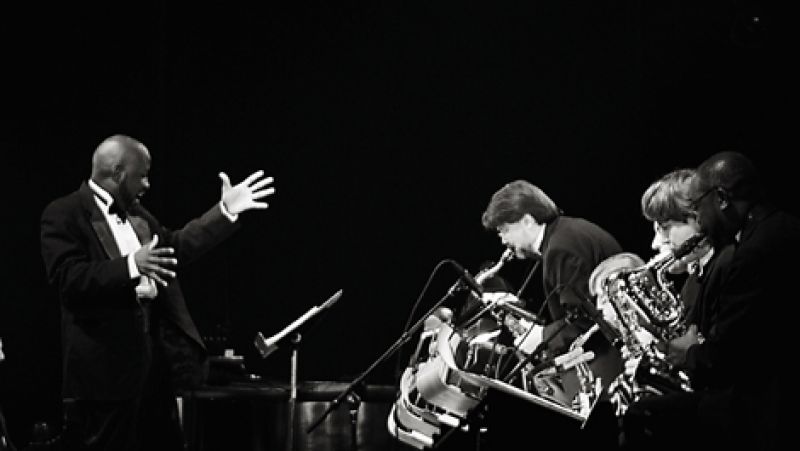 A hush had fallen over the full house at Charleston Music Hall, and the audience’s anticipation for Charleston Jazz Orchestra’s Latin Jazz Night was palpable. As the maestro strode gracefully across the stage to chat, Leonard Bernstein-style, about the evening’s program, an enthusiastic applause erupted. The crowd could sense that a torrent of rhythm, harmony, and melody was about to be unleashed.

Finally, the musicians took their cues, and at the bottom of conductor Charlton Singleton’s first down beat, the band burst into Duke Ellington’s “Flaming Sword.” Singleton led the ensemble—comprised of five saxophones, a rhythm section, and a blazing brass section of four trumpets and four trombones—with animated, joyful flair, moving the big band onward and upward by exhorting his players, cajoling them, sharing his enthusiasm with them. Every move, every look, every gesture sent a message to some part of the band; in short, he played the orchestra like an instrument.

Watching Singleton at work is mesmerizing. He twists and turns like a stop-on-a-dime bebop rhythm. He shuffles like an easygoing blues tune. He sways like the swing style of jazz. Charlton Singleton is a musical alchemist, a magician. “His approach and sound are one and the same, pure and honest,” says percussionist Quentin Baxter.

Charlton, like Charleston, is at once modern and traditional. Though fluent in blues, rock ’n’ roll, R&B, ska, and classical music, this multi-instrumentalist and vocalist specializes in the trumpet and focuses primarily on jazz. In fact, as conductor and artistic director of the Charleston Jazz Orchestra (CJO), the 39-year-old has emerged as the face of the genre in the Lowcountry. And it’s his vision people see and hear on the stage at Charleston Music Hall, or the “House of Swing,” as it has come to be known.

Since the resident big band’s inception two and a half years ago, Singleton has handpicked its 20-odd musicians and chosen its material. He selects the orchestra’s repertoire and adds or subtracts from its membership for any given performance to achieve the desired aesthetic. By all
accounts, the jazz juggernaut has become a driving force in local fine art and entertainment. “Charlton Singleton is one of the most dynamic musicians on the Lowcountry’s jazz scene,” says CJO patron Randi Weinstein. “Just watching him conduct and play piano and trumpet draws you in and captivates you. He has the ability to turn a non-jazz person into an enthusiast in a single concert.

This June, he teamed up with saxophonist Jimmy Heath, a National Endowment for the Arts Jazz Master, to perform at the Charleston Jazz Initiative Legends Festival, for which Singleton was the big-band conductor and musical director. “Charlton is a talented trumpeter, composer, arranger, and bandleader cut from the same cloth as Dizzy Gillespie, Thad Jones, Slide Hampton, and Frank Foster,” raves Heath.

But his gifts aren’t just rooted in the classic works of past masters—Charlton has his feet in both the old and the new. Take his choice to open Latin Jazz Night with “Flaming Sword,” a spirited and radical tune that Ellington, one of jazz’s original modern traditionalists, debuted in the early 1940s. Or look to his programming of the CJO Holy City Homecoming concert in 2009 with Goose Creek native and Grammy-winner Bob Belden. The repertoire included jazz interpretations of Giacomo Puccini’s aria “Non piangere, Liù” (1920s), Hoagy Carmichael and Johnny Mercer’s “Skylark” (1942), Prince’s “1999” (1982), and Sting’s “Dream of the Blue Turtles” (1985).

Charlton recalls his boyhood home reverberating with all kinds of music—pop, classical, religious, and jazz. “Big Daddy, my father’s father, was the spiritual leader for our entire community,” he says. “He wasn’t a minister, but he headed up a lot of the prayer meetings. He would walk the neighborhood to talk, pray, and sing with people who were sick.”

Charlton, who now lives in North Charleston with his wife, MaryJo, and two children, grew up in a large family rooted in the Awendaw community. He was born to childhood sweethearts, the Rev. Charles Singleton, an AME minister, and Jeanette, a school librarian. And though the sacred sounds so revered by his father and grandfather would have a lasting influence on the boy’s love of song, his first real recollection of music involved a toy. “I was two, in the hospital with walking pneumonia, and my parents brought me a little xylophone to bang on,” he says. Though simply a means to stay busy, the instrument awakened in Charlton an early passion for music.

His sister Charnette remembers young Charlton taking an interest in her piano lessons. “As a toddler, he would climb up on the piano bench in the den and start hitting the keys,” she says. “Pretty soon it was obvious that he wasn’t just playing around; he could actually pick out a melody.” By the time he was four, Charlton had made his stage debut with a performance of “Amazing Grace” at his father’s church.

During his school years, band class became his sanctuary. “He sat down at the piano one day and whipped out a Bach sonata like a pro. I was floored,” says former Moultrie-Laing Middle School band director Mark Smith. But it wasn’t piano that Smith had in mind for the young prodigy. After talking Charlton out of playing the drums or sax, Smith convinced him to pick up the trumpet, the same instrument that the band director himself played, and Charlton’s ability quickly became evident.

His talent also impressed Basil Kerr, then band director at Wando High. Like Smith before him, Kerr recognized in Singleton the rare combination of natural ability, focus, and teachability—the total package. “Charlton had perfect pitch, and it was obvious from the start,” remembers the teacher. “He thought everyone had this gift, so it wasn’t a big deal to him.” In Kerr’s classroom, the budding musician began to form a picture of his future. “Being in Basil’s class was something special,” recalls Charlton. “He was exceptional with his students, and the fun he had made it really simple for me to want to be a band director.”

So Charlton headed off to Berklee College of Music in Boston to pursue teaching. “I really didn’t know what the school was about, just that lots of famous musicians had come through its doors, which was enough to attract me. I quickly found out, though, that I was in the wrong place if I wanted to direct a high school band.” So he transferred to South Carolina State University in the spring of 1990, and four years later, after playing in the school’s famed Marching 101 and Jazz Ensemble, he emerged with a degree in performance.

Like a good many artists, the graduate didn’t confine himself to a nine-to-five job. He found work at CD Superstore (which later became Millennium Music) and “always seemed to have luck getting gigs.” Pretty soon, those occasional shows started to include work with Baxter and bassist Kevin Hamilton. The triumvirate staged several bands—the most popular being The Gradual Lean, an avant-garde ensemble with jazz guitarist Lee Barbour that’s still performing—that raised interest in local jazz, particularly among young people.

Charlton did eventually make it to the classroom in 2000. “My longest tenure was at the Charleston School of the Arts, where, ironically, I taught middle schoolers alongside Basil, who now directs the SOA’s high school band.” Though he “had a blast,” Charlton admits that he thought more and more about performance, and finally, in 2007, he decided to leave the classroom to teach in another realm.

Return to the Source

With a mission to celebrate the historical tradition and legacy of Lowcountry jazz on a larger scale in town, Charlton organized and led the prototype for the Charleston Jazz Orchestra in early 2008. Teaming up with singer Leah Suárez and others following the first concert, the group developed the idea to have an annual season of shows and make the CJO like other jazz orchestras in major cities around the United States. Singleton’s leadership and organizational abilities, his mastery of music history and performance, and his vast network of musician colleagues made him an obvious choice to lead such an enterprise. “I was very proud to be the director of the band for the first show, the Charlton Singleton Orchestra, and even more proud when the team decided I should be the artistic director of what became the Charleston Jazz Orchestra.”

While his talents and tastes incorporate both the past and present, Charlton does keep an eye toward the future. “Charleston is an explosion waiting to happen,” he says. “More and more artists are coming to town, and the word is spreading. We have a lot of older greats—Oscar Rivers, George Kenny, Lonnie Hamilton—whom enough younger musicians know. Plus, we have great young musicians who are staying here.

“This is where I am right now, riding the wave with a talented group of people.” Charlton’s at the crest of that wave, taking the traditional music of Charleston in modern directions.