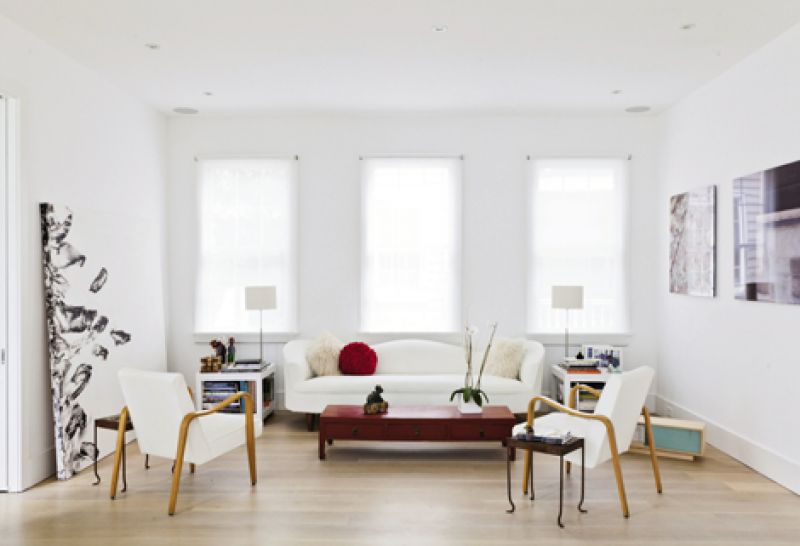 It’s 7:30 on a Thursday night, and most of the neighborhoody west end of Warren Street is quiet. But the door to Stacie McCormick and Igor Jocic’s circa-1880 home swings wide open as people move in and out, lights on in every window.

The Who’s Who of the Halsey are inside, along with the director of New Orleans’ Contemporary Art Center, students from SCAD, and a handful of local artists and friends. It’s one of Stacie’s art exhibitions, this one dubbed “Home Is Where the Art Is,” aimed at expanding the local contemporary art scene and sharing the couple’s affinity for modern works.

It’s one of many such events (another being a reception for international photographer Michael Kenna) in the year and a half since the pair finished their ground-up renovation, but then, that’s the idea. “We wanted to be able to have shows right here in our living room,” says Stacie, a mixed-media artist whose own multi-disciplined work hangs throughout the house.

That’s a tall order in a city known for its narrow, rank-and-file singles and railroad-style floor plans. Not exactly ideal shakes for light, wide-open art salons. So it’s a good thing Stacie, an architectural and interior designer by trade, and Igor knew exactly—right down to the sky-high doorways and whopping 28- by 14-foot central room—what they wanted, and how to get it.

In fact, it all started long before moving to Charleston, with a simple, liberating idea of space. “If there is a single reason we’re here, that’s it—space,” Stacie explains. The two met while living in London—he’s a creative director and branding strategist of British-Serbian descent; she’s American and landed there at 19 to pursue undergraduate and master’s degrees in fine art. They married and began thinking about where to raise their kids (Olivia is eight, and Sienna, three). “In England, we lived in a tiny house—you could turn it on its side and it would fit in the living room we have now—and outside, we’d go to a small park. It was a very contained, very controlled lifestyle.”

As for the Holy City and its miles of shoreline and houses with more than a balcony for a backyard? They discovered it after Stacie’s niece moved here, and it was all the breathing room they needed. “We came to visit and right away made the mistake of going house shopping,” she laughs. “Not really a mistake, but it got us going, thinking more seriously. We considered most anywhere—Nice, Barcelona, many different places—but Charleston just ticked so many boxes.” It didn’t hurt that their second visit a few months later coincided with Spoleto. Plus, it was that trip that turned up the right house—a broad clapboard number in Radcliffeborough with a pecan tree in the back. But for all their artful ideas, it wasn’t the home’s generous width (dubbed “an anomaly” by Historic Charleston Foundation) that got them. “We bought this house 100 percent on the feeling I got walking through it,” Stacie explains. “It was in ramshackle condition, but it had a feeling of security and strength to it. The family before us lived here for nearly 50 years, and they loved this house—you could feel that, and now it was our turn.”

Its aura firmly set, Stacie and Igor began working to make the rest of it so (the structure was nearly 20 inches out of level, the chimneys had sunk, and the fill beam had turned to powder). “We essentially took it down and built it back up again,” she says.  Detailed drawings in hand, the newcomers hired architect Heather Wilson to help usher them through BAR approvals and other matters, as well as Reavis-Comer contractors, headed up by “house whisperer” J.D. Eelman. And even with the two-story family room/bedroom addition off the back, they kept to the original footprint.  “Designing this renovation was something of a selfish exercise,” jokes Stacie. Though she now represents the Urban ElectricCompany internationally, the California native has spent the last decade reimagining spaces for clients, like the pediatric ward of London’s St. Mary’s Hospital (where both daughters were born) and retail and corporate interiors both here and abroad. “For once, I didn’t need to draw up compromises to suit a client’s needs, or think about how anyone else might live in it. This was just for us.”That meant that if they wanted to create an oversize living room that could double as an art salon or hold a dinner for 30, they could. And they did. They halved the size of a front reception room and turned it into a guest bedroom, removed a pair of chimneys to allow more wall space, and moved the kitchen into what used to be an unfinished utility area.

“We wanted the kitchen to appear like any other room of the house,” says Stacie, pointing out that there’s no wall-hanging cupboards or overhead vent. “This is our hub, our hangout, so it had to be a blank canvas and not overtaken with utilitarian elements. Who cares if hamburger grease splatters on the art? The important thing is that it’s there.”

This idea of a “blank canvas” extends throughout the house—a purposeful paring-down that allows what’s inside to come to life. “The house isn’t meant to be a sculpture. It has few decorative elements—no embellishments in the doorframes or detail in the trim,” says Stacie.

Rather, it’s what goes in the house that’s important: like photographer Alex Hartley’s interpretation of natural and built environments, minimalist David Simpson’s “interference” abstracts, landscape works by Lisa Sanditz, and any of the rotating collections Stacie curates in the central gallery.  They’re all pieces that buck convention, but then, so do the owners. “We didn’t question the decisions we made here—like the nine-foot doorways or the wide-plank quarter-sawn oak floors installed only after the contractor gave me 10 pages on why we couldn’t have them—but we did have to fight to get what we wanted. We defined the design, then worked hard to get it. It took up all of our time, just getting it right,” says Stacie, smiling. “I spent my first year in Charleston breast-feeding and renovating. That was it, those were my projects.”

It didn’t hurt that Charleston itself has an “inherently helpful nature,” she notes. “The city is truly amazing in that regard. It’s a very supportive community, and we’ll always be grateful for that.”  Meanwhile, Stacie and Igor are living with the courage of their convictions. “I’m hosting artists, my kids are running through the house—it was a big leap of faith, but if you listen, the house will tell you what to do. It always does.”