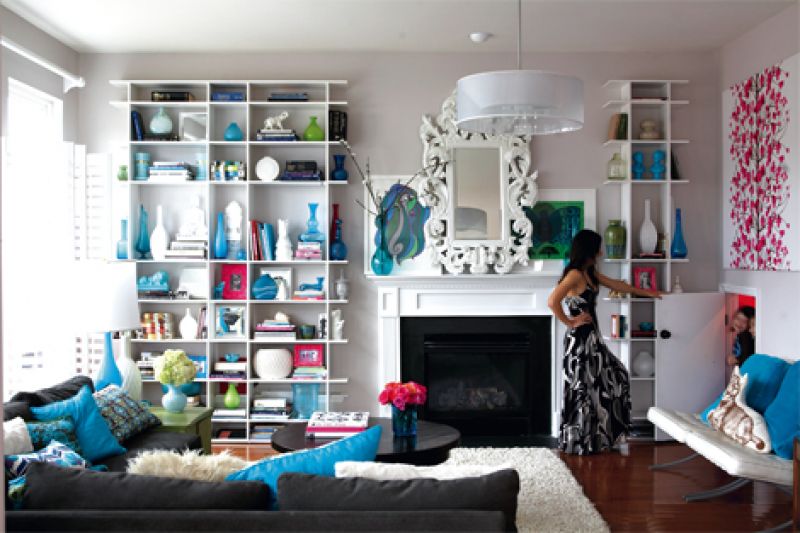 “The urban escape fantasy comes up at every Los Angeles dinner party,”says Robert Vandekirk, leaning back in a mod molded plastic chair, sporting an alterna-T covered with a smoky-colored blazer, whip-smart glasses, and buzz cut that might just be leftover from his guest stint on “Army Wives.” “The fantasy,” he says, “is if you could move anywhere, where would it be? For us, it started off as Boston, Eugene, Oregon, Wilmington, North Carolina, Seattle, or Charleston.” Sitting in a four-bedroom clapboard house enlivened by daughters Hazel and Georgia, Robert and wife Angel Roberts are explaining how they opted out of their Dwell-erific glass-and-concrete box home on the West Coast, ditched their TV and film careers (he, a jack-of-all-trades art director and sometimes actor, and she, a costumer on “That ‘70s Show”) and landed here in the Barfield Park ‘burbs of Daniel Island. “Boston,” continues Robert, “was too cold; Eugene and Seattle, too far from family; Wilmington, not quite right; and Charleston? Well, Angel’s parents are up in Myrtle Beach, and there are just so many energies focused here. It’s a port city, a college town, a historically significant place, and has great food, style, and its own vernacular.” Angel, barefoot in wide-legged jeans and a satin blouse cinched at the waist with a retro embroidered belt, curls up on the pillow-laden sofa across from him, grins, and adds her two cents: “We wanted to move someplace civilized,” she says. “That means somewhere where you don’t sit in traffic an hour-and-a-half trying to take your kid to a ballet lesson that will last 45 minutes; you don’t pay $25,000 to send your child to kindergarten; and you don’t breathe filthy air. We wanted to live where we could ride our bikes to school and the grocery, walk to dinner, and just be totally man-powered.” Given their criteria, the pair originally envisioned “a funky little house” in the Old Village, but that area’s current school construction (and inherent bussing) thwarted their ideal. Thus, Daniel Island popped onto their radar. At first pass, the draw-outside-the-lines couple balked at the exurban flavor of the place; terms like cookie cutter and “Stepford Wives” flew around, with Robert declaring, “Over my dead body…” But as time passed and escapism kept nagging, neither could shake off the island’s potential. “I got turned around when I visited,” said Robert. “I started talking to people, and you’ve got to give the planners credit. It’s a beautiful setting, there are hiking paths everywhere, we can walk to the creek and jump in with the girls, and it’s priceless that my oldest can bike to school. I mean, after I ride with her there, the neighbor’s dog follows me home and scoots into the house to eat all the breakfast crumbs off the floor. You can’t beat that, and it turns out, we’re in a community surrounded by other families who wanted the same things. Plus, if you think about it, 200 years ago, nobody moved into an old house. Debate over.” Thus the pair made the leap. They picked a two-story home at the end of a cul-de-sac with a huge backyard located two blocks from the school, the church, pool, and pizza place. When the deal was done, the challenge came with translating their hip sensibilities into a vanilla house. Not a problem, says Angel. “The way I see it, you don’t live on the outside of your house, you live on the inside. Looking from the street, I’ve got a cookie-cutter, traditional home, but inside, it’s all modern.” Modern and mighty funky, too. Step over the threshold, like the scores of little girls who parade in and out as the couple chat, and it’s tough to decide where to explore first. Fans of “shocker colors,” Angel and Robert covered the dining room to the left with Asiatic birds and flora and spread a faux zebra rug over the floor. The once-somber study to the right is now lit by a red crystal chandelier and wears an undercoat of rich eggplant that’s barely visible behind the nearly-to-the ceiling bulletin boards covered with fabric samples, snapshots, invites, and knick-knacks, and a pair of bar-height stainless steel work desks. Down the hall in the open living room, the backdrop mellows as the walls slip into a pale lavender, but the energy zips back up thanks to scores of Amy Butler’s Pucci-esque patterned pillows (offset by a few furry numbers) on the gray streamlined sofa. Turquoise pillows pop in white and stainless steel Barcelona chairs while vibrantly colored vessels punctuate 11-foot-tall untrimmed bookshelves. Even the kitchen, with its standard built-in cabinets (now painted a chocolate brown) and the breakfast nook with its Lowe’s chandelier (now dressed with colorful, added-on crystals) hold surprises. But perhaps the most fun element? Little Hazel’s secret room. Under the stairs in what was intended as storage space sits a tiny clubhouse for an elfin gal who’s currently parading around in a camo-ruffled mini and striped stockings, dinging this and that with a fairy wand. Giving a tour of her hideaway, she shows off the bright pink walls adorned with appliqué polka dots; oversized pillows that cover the floor; paper lantern orbs that provide soft light; and the dollhouse at the back wall, wherein lies an equally funky décor. A like-sized friend joins wee Hazel, and suddenly, the tour’s over for adult-sized interlopers, and the door claps shut. “It was a present for her,” says Robert, with a sideways smile. Turns out, the whole colorful place, inside and out, seems to be much the same for the whole family. “For us,” says Robert, “Charleston has turned out to be one of the few Valhallas a young family can still live in. In terms of raising our kids and living out our urban escape fantasy, it’s perfect.”