Shrimp & Grits
December 2013
Grits, more commonly called “hominy grits” by Charlestonians, are as much a part of the Lowcountry diet as the shrimp placed atop them (an 1894 News & Courier article stated, “hardly a family in the city does not have this dainty little crustacean served for breakfast”). While the two ingredients were first paired for morning repast, these days they’re thankfully found on restaurant menus for every meal 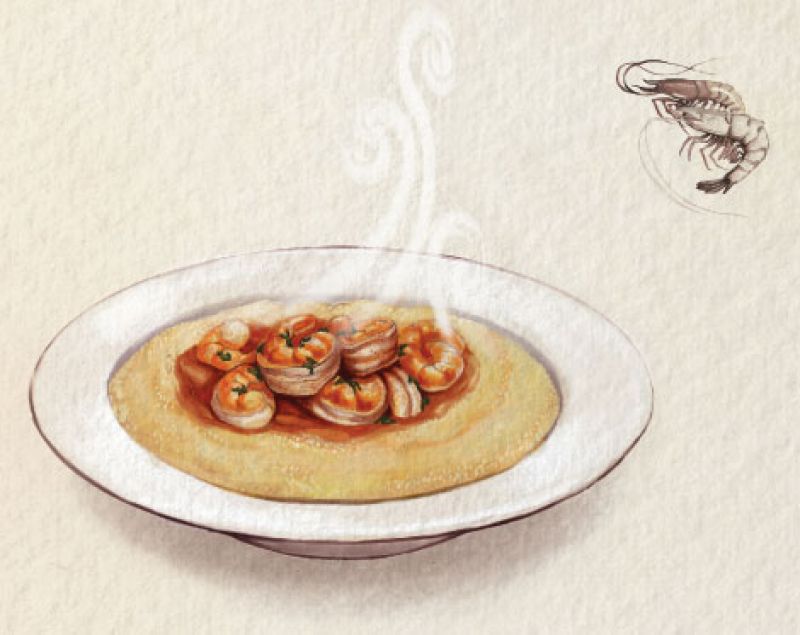 Instant Gritification
A Charleston colonist wrote in the 1680s: “The Indians in Carolina parch the ripe Corn, then pound it to a Powder, putting it in a Leathern Bag: When they use it, they take a little quantity of the Powder in the Palms of their Hands, mixing it with the Water, and sup it off; with this they will travel several days.” Voila, the original instant grits!

Shrimp Boats are Comin’
Shrimp are harvested commercially by trawlers, which generally work in the ocean within three or four miles of the beach. Individuals shrimp recreationally using cast nets and drop nets. There are three seasons: roe shrimp in May or June, brown shrimp from approximately June to August (though sometimes as late as October), and white shrimp from August to December (or even January).

State Fare
In 1976, South Carolina declared grits its official food, noting that grist mills were once common throughout the state and that “grits has been a part of the life of every South Carolinian of whatever race, background, gender, and income.”

Goodness Gravy
While the original shrimp and grits recipes (called “receipts” in Charleston) involved a sauce of melted butter, grits are now also served with gravy, usually made from sausage or country ham (that’s red-eye gravy). Today, there are as many different recipes for the dish as there are chefs and kitchens.

True Grits
Hominy is dried corn kernels that have been steeped and cooked in a lime solution that removes the hull and germ. Hominy can then be milled into grits. The word “hominy” comes from the Virginia Indian word “rokahamen,” for “parched corn.” “Grits” may be a corruption of “grist,” the act of grinding grain. Charlestonians call them “hominy grits.”